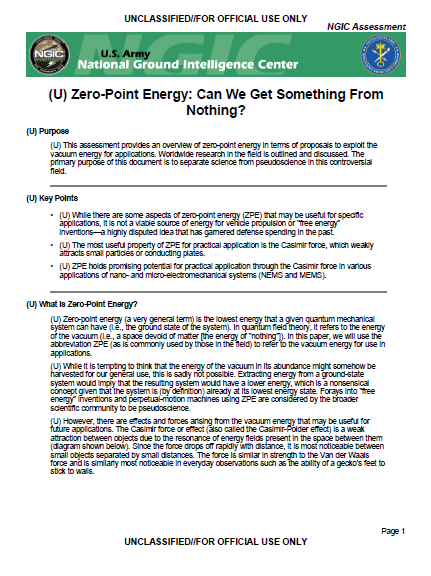 (U) This assessment provides an overview of zero-point energy in terms of proposals to exploit the vacuum energy for applications. Worldwide research in the field is outlined and discussed. The primary purpose of this document is to separate science from pseudoscience in this controversial field.

• (U) While there are some aspects of zero-point energy (ZPE) that may be useful for specific
applications, it is not a viable source of energy for vehicle propulsion or “free energy”
inventions—a highly disputed idea that has garnered defense spending in the past.
• (U) The most useful property of ZPE for practical application is the Casimir force, which weakly
attracts small particles or conducting plates.
• (U) ZPE holds promising potential for practical application through the Casimir force in various
applications of nano- and micro-electromechanical systems (NEMS and MEMS).

(U) What is Zero-Point Energy?

(U) Zero-point energy (a very general term) is the lowest energy that a given quantum mechanical system can have (i.e., the ground state of the system). In quantum field theory, it refers to the energy of the vacuum (i.e., a space devoid of matter [the energy of “nothing”]). In this paper, we will use the abbreviation ZPE (as is commonly used by those in the field) to refer to the vacuum energy for use in applications.

(U) While it is tempting to think that the energy of the vacuum in its abundance might somehow be harvested for our general use, this is sadly not possible. Extracting energy from a ground-state system would imply that the resulting system would have a lower energy, which is a nonsensical concept given that the system is (by definition) already at its lowest energy state. Forays into “free
energy” inventions and perpetual-motion machines using ZPE are considered by the broader scientific community to be pseudoscience.

(U) However, there are effects and forces arising from the vacuum energy that may be useful for future applications. The Casimir force or effect (also called the Casimir-Polder effect) is a weak attraction between objects due to the resonance of energy fields present in the space between them (diagram shown below). Since the force drops off rapidly with distance, it is most noticeable between small objects separated by small distances. The force is similar in strength to the Van der Waals force and is similarly most noticeable in everyday observations such as the ability of a gecko’s feet to stick to walls.