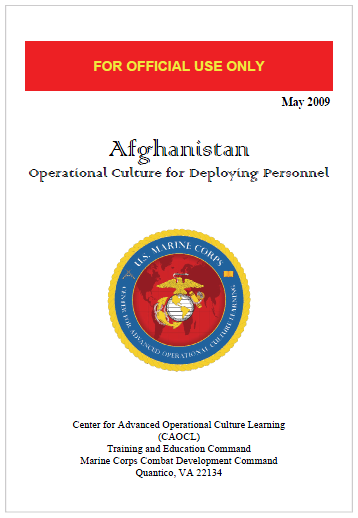 When studying terrain, if you use a pair of binoculars, a set of night vision goggles, and infrared equipment, you see three different images. Which one is correct? All three, of course. Which one do you use? Same answer: all three. You combine them to understand the ground. The same is true of studying the cultural, or “human,” terrain. You can look at “human terrain” through different “lenses,” too. For example, we can study ethnic groups, or language, or religion, or social values. We might describe the different perspectives seen through these different lenses briefly as follows:

Which one is correct? Again, all three are valid, but — just like studying a real piece of ground — there’s no easy “single answer.” You must combine the information. Understanding the cultural situation is a little like understanding how a play is developing in a football game. It’s a dynamic situation, and there are a lot of moving parts – – you need to understand what each of the position players will do in the situation, and how well they’ll do it, to know where the ball is going. It’s not easy, but it’s not rocket science either. Just like you can study the opponent’s game videos and stats, you can study the culture and be mentally prepared for every new situation.

Afghans aren’t mysterious, inscrutable people you can’t understand. They’re human beings, just like you. Study their culture and their language: It could mean the difference between success and failure, and it could save your life or that of other Marines around you.

A Classic Case of “Blowback”

In certain parts of the US government, when an operation has unintended negative second or third-order consequences, they are called “blowback.” The radical Islamic movements in the Pashtun areas today were always present, but putting them on steroids in the 1980’s was pretty short-sighted by any reasonable accounting — a classic case of “blowback.” During the Soviet-Afghan war, the Pakistanis had their own agenda. The Pakistani Army’s intelligence branch, called the Inter-Services Intelligence Directorate, or ISI, became extremely powerful by cooperating with the United States and the government of Saudi Arabia to channel roughly $7.2 billion dollars worth of covert foreign military aid to their preferred Mujahideen clients. To control the Mujahideen, the ISI formed seven resistance groups, each with a notional political party associated with it. These became known as “the Peshawar Seven.” CIA oversight of the covert money was weak, and much of it went into ISI’s pockets.

The ISI wanted puppets they could control when the war was over. The Durrani Pashtun tribes which traditionally supplied most of Afghan’s national leadership and all of its royalty where anathema to the Pakistanis — they would never cooperate in setting up a government which owed allegiance to Islamabad. So they were marginalized, and their traditional rivals, the Ghilzais and the Hill Tribes, were favored. Significantly, three of the seven recognized groups were led by Ghilzai Pashtun tribal leaders. None was led by a Durrani Pashtun.

For the CIA, the object of the war was to bleed the Soviets — payback for the Vietnam War and Soviet support to the North Vietnamese (Steve Coll). Afghanistan was thought of as “the Soviet Vietnam.” The CIA was happy to steer money towards whichever groups fooled them into believing they were killing the most Russian troops. The undisputed champ of faking battles and Soviet kills was Gulbuddin Hekmatyar of the HiG organization, which in reality spent most of the war assassinating other Afghan Mujahideen commanders and stockpiling arms and money, positioning itself for the inevitable postwar power struggle. (So effective was HiG in killing other Mujahideen leaders from other parties that it was rumored Hekmatyar must be working for the Soviets!) Some Afghans at the time said this was a bad idea, including the exiled Afghan King, Zahir Shah, and Hamid Karzai (then a U.S. contact in Peshawar). The U.S. State Department also argued for giving the money and weapons to more moderate or nationalist groups in the Peshawar Seven, like Ahmed Shah Massoud’s Jamiat-i-Islami movement, or the royalist NIFA party, as this would be better for the country, and warned the CIA that arming, funding and equipping radical anti-western extremists and terrorists who hated the United States would backfire. This advice was ignored. As a result, the religious extremists among the Ghilzais and the hill tribes around Jallaludin Haqqani became very wealthy and powerful.

Because the majority of enemy commanders in Afghanistan today are Mullahs who learned their business as Mujahideen in the Soviet-Afghan War, it is not surprising that the tactics of the almost-exclusively Pashtun Taliban today are similar to those of the Mujahideen against the Soviets. Mujahideen combat tactics were studied and recorded in detail by Lester Grau in two well-known books.