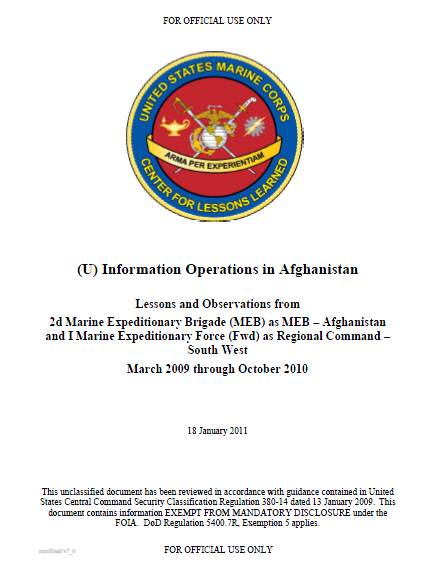 (U) Purpose: To inform Deputy Commandants (DCs) Combat Development and Integration (CD&I), Plans, Policies, and Operations (PP&O), Aviation, Installations and Logistics (I&L), Commanding General (CG), Training and Education Command (TECOM), Director of Intelligence, operating forces, and others on results of a Marine Corps Center for Lessons Learned (MCCLL) collection conducted in September and October 2010 to document lessons and observations from former members of the 2d MEB as MEB-A staff, and I MEF (Forward) as Regional Command -Southwest (RC(SW) staff regarding planning and conduct of information operations (IO) in Afghanistan.

(U//FOUO) MEB-A and later RC(SW) intent was that all operations be planned, coordinated and executed within the framework of gaining influence among the target audiences. Three key elements of the approach employed by MEB-A were: to frame activities and operations in the context of influence, consistency of coalition force activities with IO themes and messages: “it is not only what you say or what products you hand out, it is what you do,” and “the principal voice [for IO themes and messages] is really the Afghan voice.”
Colonel Michael Killion, G-3, MEB-A

(U//FOUO) Emphasis on integration of IO and other operations continued as the I MEF (Fwd) staff prepared for their deployment as RC(SW). “Information operations is a strategic weapon you can use to get your message across … it cannot be an afterthought.”
MajGen Richard Mills, Commanding General, RC(SW)

(U//FOUO) IO themes and messages developed at the RC(SW) level were nested within strategic communications messages from higher headquarters, International Security Assistance Force (ISAF). Messages were also broad-based to allow tailoring for local conditions. Examples included successful actions of the government or Afghan security forces that build credibility or the perception of security.

(U//FOUO) A general theme expressed by interviewees was, “IO is tactical.” Much of the contact with the population is at the small unit level, and the Marines need to understand (1) the importance of their interaction with locals, and (2) that their actions must match the words they use. This theme relates to three areas: (1) allocating sufficient capabilities and resources to the battalion level, e.g., attaching sufficient, appropriately sized tactical psychological operations (PSYOP) elements, combat camera, and Radio in a Box (RIAB) transmitters; (2) assigning capable individuals to IO billets, and (3) training in employment of IO for small unit leaders.

(U//FOUO) MEB-A worked to develop a network of strong personal relationships with key individuals such as GIRoA officials, tribal leaders, and other key influencers at the local, district and provincial levels.

(U//FOUO) From an IO perspective, the primary threat from insurgents was a persistent, localized propaganda campaign. Local insurgent leaders, being familiar with social dynamics in their areas, were effective in employing tribalism, social fears and religious propriety to influence the population. As MEB-A elements partnered with special operations forces (SOF) and began having success in targeting high value targets, claims emerged of coalition forces desecrating or burning the Qur’an (Islamic holy text), which negatively impacted relations between local nationals and coalition forces, at least short term. The MEB’s network of Afghan relationships was employed as a means of countering insurgent propaganda. “We learned pretty quickly [that] our best counter action was really to provide information, declassify information, provide evidence to the contrary of what the [insurgents] claim was, and then use that leadership to organize a shura,” or “truth commission” of local elders or leaders to determine the facts of what had actually transpired. This network of Afghan leaders then disseminated their findings to the population, thus “the principal voice was the „Afghan voice.‟ …We found when we didn‟t disseminate a message through Afghans, that that‟s when it got twisted or misconstrued.”

(U//FOUO) The MEB-A commander and staff interfaced with provincial leaders. A similar approach to interface with the local population was applied at battalion and regimental levels, focused on identifying and developing relationships with key individuals within the district. Development of such relationships, and providing them information to disseminate to the population was key in countering enemy propaganda and “being first with the truth.” When a SIGACT occurred, the battalion would immediately arrange a KLE for the on-scene commander to meet with ANSF, GIRoA officials and local leaders to determine and disseminate the facts regarding an incident.  Similarly, the PAO would assemble a quick reaction team of correspondents, preferably independent external media that were in the area to conduct independent reporting of an incident or event. Combat camera also maintained photographers on standby, with their camera equipment packed and ready.