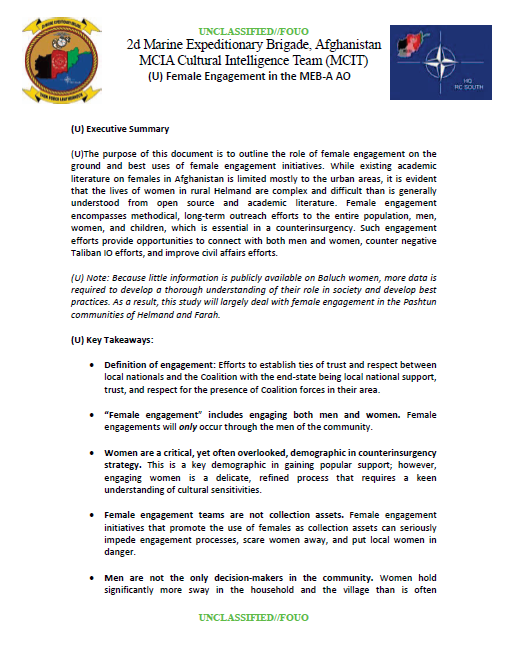 (U) The purpose of this document is to outline the role of female engagement on the ground and best uses of female engagement initiatives. While existing academic literature on females in Afghanistan is limited mostly to the urban areas, it is evident that the lives of women in rural Helmand are complex and difficult than is generally understood from open source and academic literature. Female engagement encompasses methodical, long-term outreach efforts to the entire population, men, women, and children, which is essential in a counterinsurgency. Such engagement efforts provide opportunities to connect with both men and women, counter negative Taliban IO efforts, and improve civil affairs efforts.

• Definition of engagement: Efforts to establish ties of trust and respect between local nationals and the Coalition with the end-state being local national support, trust, and respect for the presence of Coalition forces in their area.
• “Female engagement” includes engaging both men and women. Female engagements will only occur through the men of the community.
• Women are a critical, yet often overlooked, demographic in counterinsurgency strategy. This is a key demographic in gaining popular support; however, engaging women is a delicate, refined process that requires a keen understanding of cultural sensitivities.
• Female engagement teams are not collection assets. Female engagement initiatives that promote the use of females as collection assets can seriously impede engagement processes, scare women away, and put local women in danger.
• Men are not the only decision-makers in the community. Women hold significantly more sway in the household and the village than is often understood or immediately apparent. It is by understanding the means through which they exercise that influence that requires greater understanding by the Coalition.
• Pashtun gender prohibitions are designed to protect Pashtun women, not Western women. Afghan men interact differently with Western women. Often seen as a “third gender,” Afghan men will approach CF women with different issues than are discussed with men. For this reason, engagements are necessary with both men and women. As a result, many of those cultural prohibitions are not applicable with respect to Western women involved in female engagements.
• Afghan and Iraq women are very different. Therefore, female engagement in Afghanistan cannot be framed by Western and Iraqi biases, and cultural awareness is vital to successful female engagement processes. Afghanistan is also at an extremely different level of social development in 2010 than was Iraq in 2006-2009 when the majority of the USMC female engagement occurred.
• Female engagement is not an Afghan Lionness program. While security will inherently be part of the mission for any Marine, the primary goal is not to conduct female searches.
• All politics in Afghanistan is local politics. In light of this, broad-stroke programs that do not anticipate or account for the very local nature of Afghan culture and politics risk causing more problems than solving them.

(U) Overview of Women in Helmand and Afghanistan

(U) Much of the literature that exists on women in Afghanistan is centered on the lives of urban women in the west, north, and east. Historically, women’s rights movements in Afghanistan came from the upper echelons of society or the civil servant class in the urban areas. Major social reforms were attempted at least at the beginning of the 20th century, when King Amanaullah and Queen Soraya, inspired by Attaturk’s reforms in Turkey, tried to rapidly alter the status of women in society which ultimately led to the assassination of the king. King Zahir Shah, Prime Minister Daoud Khan, and leaders during the Soviet era also worked to incorporate more women into civil servant positions and other fields. These latter reforms were almost exclusively limited to major urban centers, whereas the countryside resisted such changes. The more progressive attitudes of urban-dwellers toward women over several decades were crushed by the vicious and aggressive execution of Taliban extremist interpretation of the Deobandi philosopher Maududi, which ultimately led to the death or mutilation of thousands of men and women in the cities.

(U) Very little is known about the lives of women in Helmand, who have largely been excluded from the recorded complexities of regional history in the last 30 years of warfare. Furthermore, even less is known about rural Afghan women. Misconceptions and ignorance of at least half the population in a rural insurgency may impede counterinsurgency efforts where the population is the center of gravity. A study conducted in rural Helmand and Kandahar in 1999 by anthropologist Anne Pont indicated that the lives of women in southern Afghanistan had not changed significantly over the previous 30 years in terms of their role in society. Rural Helmandi men and women were always conservative, even by the standards of Lashkar Gah residents.

(U) While rural Helmandis have always been conservative, the treatment of women that in the eyes of a Western observer may appear backward and incredibly harsh is not as simple as men inherently wanting to treat women badly. Pashtun society dictates a certain niche for women, who are revered for their role as the mothers and caretakers of the family. Practices such as offering young brides to settle disputes and attain dowry money, honor killings, polygamy, or safeguarding women in compounds all need to be understood not only in a cultural context, but also through the lens of socio-economic strata and protracted warfare. Culturally, Pashtun tradition of promising daughters to men at a very young age, called bad, is a practice that solidifies two friends or individuals (and thereby, their family, clan, and tribe) as blood relatives in a manner that cannot be fully understood in a Western mindset. In a tribal society where who you know can mean life or death, marriages are a means of securing access and allegiance of a certain network. At times, promising a daughter or son for marriage is symbolic of the importance of the friendship between individuals. Economically, arranged marriages also provide potentially badly needed income to an impoverished family; or vice versa, a marriage dowry can cripple a man’s family with debt for the rest of their lives. Interestingly, Mullah Nasim Akhundzada who conquered Helmand under the Harakat-e-Inqilab-e-Islami mujahideen faction, forbid the practice of bad and permitted some degree of women’s involvement in economic activities in parts of Helmand. This demonstrates that broad-stroke assumptions cannot be made without risk even in Helmand, as individual tribal leaders may deem certain tenets of Pashtunwali more important than others. Nonetheless, thirty years of intense warfare, where rape was regularly used as a war crime or to shame your enemy’s family, intensified protective measures over women. The protectionist measures over women even prevent women from health care access unless the situation is very dire, which is exacerbated by poverty as well.