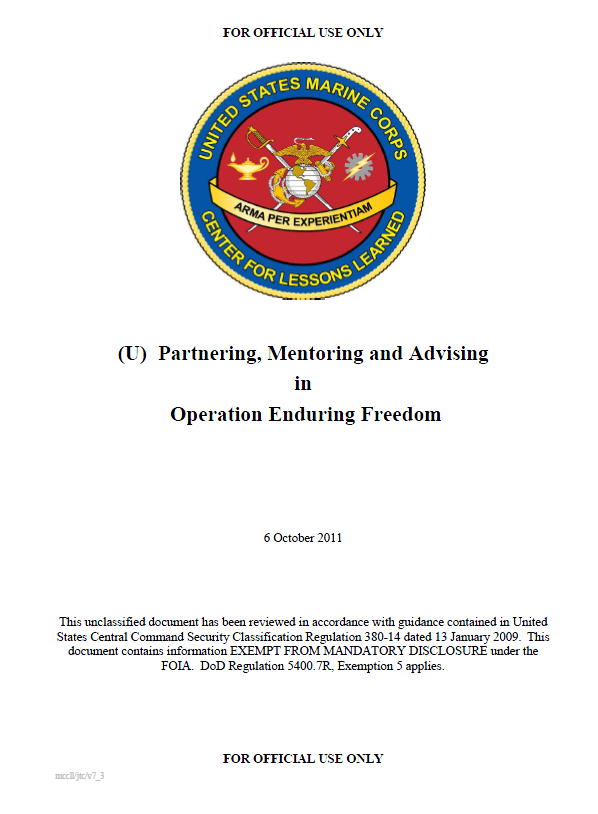 (U) The Marine Corps has a long and storied history of partnering, mentoring, and advising foreign militaries. Marines served as the officer corps of the Gendarmerie d’Haiti and integrated at platoon-level with South Vietnamese Popular Forces. These are only two of many possible examples, but they suffice to illustrate the diversity of relevant Marine Corps experience. This enduring legacy influences Marine counterinsurgency operations in Afghanistan as well as theater security cooperation exercises throughout the world.

(U//FOUO) Many of the interviewees stated that the partner mission has been cited as the primary bid for success in OEF. As such, it should be the focus of effort and should be sourced and resourced accordingly. However, the sourcing of advisor teams often did not support that focus because teams were manned with whatever personnel were available, from around the Marine Corps if globally sourced or with the unit if unit sourced.

(U//FOUO) There are a number of Marine Corps organizations in the advisor training arena, not all of which are involved in the training of teams for Afghanistan. There is the Marine Corps Training and Advisory Group (MCTAG), the advisor training cells (ATCs) in each Marine expeditionary force (MEF) and the Advisor Training Group (ATG) at Marine Air Ground Task Force (MAGTF) Training Command. Training for the teams is not standardized among units nor training centers; there is a training and readiness (T&R) manual but there are no established qualifications.

(U//FOUO) Advisor teams should be manned, trained, and equipped to the assigned mission. Identify them early, provide sufficient time to train and to properly resource them.

(U//FOUO) Partnering and advising skills should be formalized and institutionalized, similar to combined arms or other tasks. Working by, with, and through host nation counterparts should not be restricted to the current environment but developed to include other scenarios such as deploying with a Marine expeditionary unit (MEU) to the western Pacific Ocean or the Black Sea.

(U//FOUO) Afghans are not Marines. The Afghan National Security Forces (ANSF) have to be good enough to defeat the enemy that they face but do not have to be a mirror image of the capabilities of the Marine Corps.

(U//FOUO) It is difficult to ask the ANSF to perform the same missions as the Marines if they lack equipment. However, do not provide them capabilities that they will not be able to afford or sustain. Whatever is provided needs to be culturally appropriate so that it will endure beyond the departure of coalition forces. This concept applies to equipment, tactics, techniques and procedures (TTPs) as well as the conduct of operations – “let them do it.”

(U//FOUO) The ANSF’s lack of equipment made it more difficult to partner and task them to conduct the same missions as the Marines. For example, one Afghan unit rated 65 high mobility multipurpose-wheeled vehicles (HMMWVs) yet only had two that were operational.

(U//FOUO) As OEF coalition forces transition and drawdown, advisor teams will still be required. However there will be fewer units in the area of operations (AO) from which to source the teams. The battlespace owners currently provide most of the teams. What happens when the parent unit leaves? Where there were three to five battlespace owners but now there will be only one, who will accept ownership of the partner, mentoring, and advising tasks and capabilities? Will the model shift to an organization similar to the one that existed in Iraq during Operation Iraqi Freedom (OIF)?

(U//FOUO) Being responsible for both the kinetic fight and the development of host nation security forces in the AO was challenging for the battlespace owner.

(U//FOUO) Enablers, especially translators, were an important factor in the successful accomplishment of the partnering and advising mission.