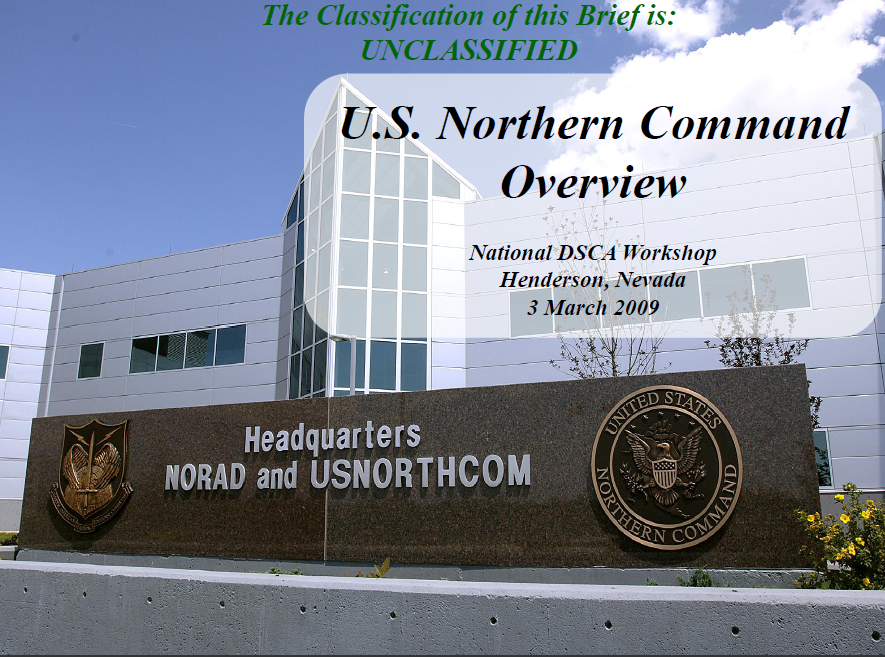 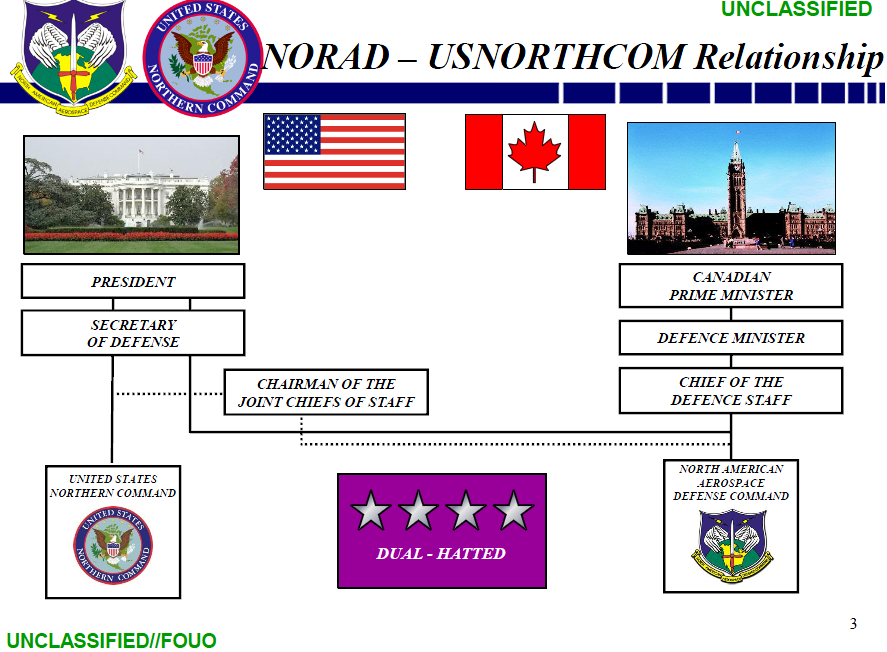 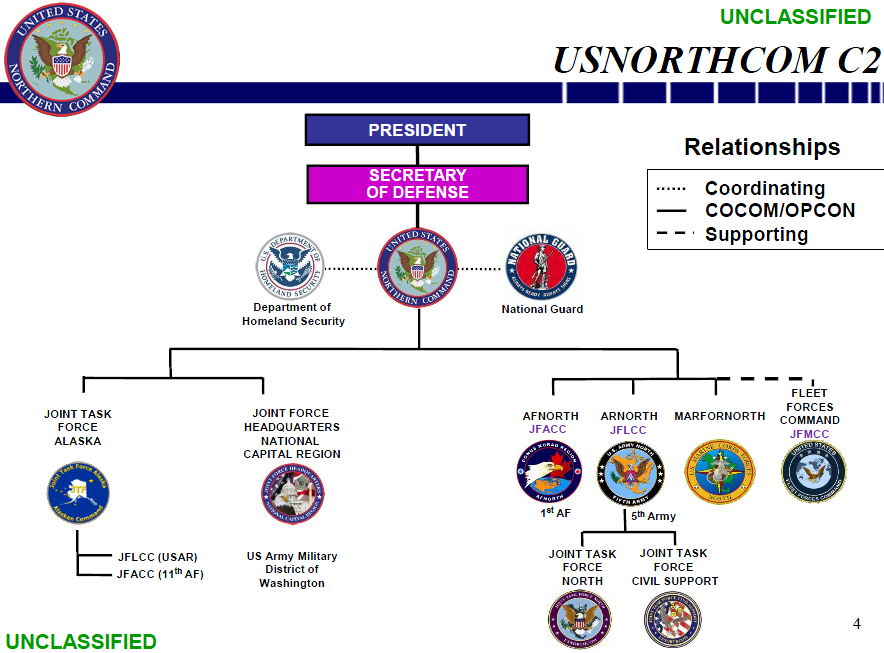 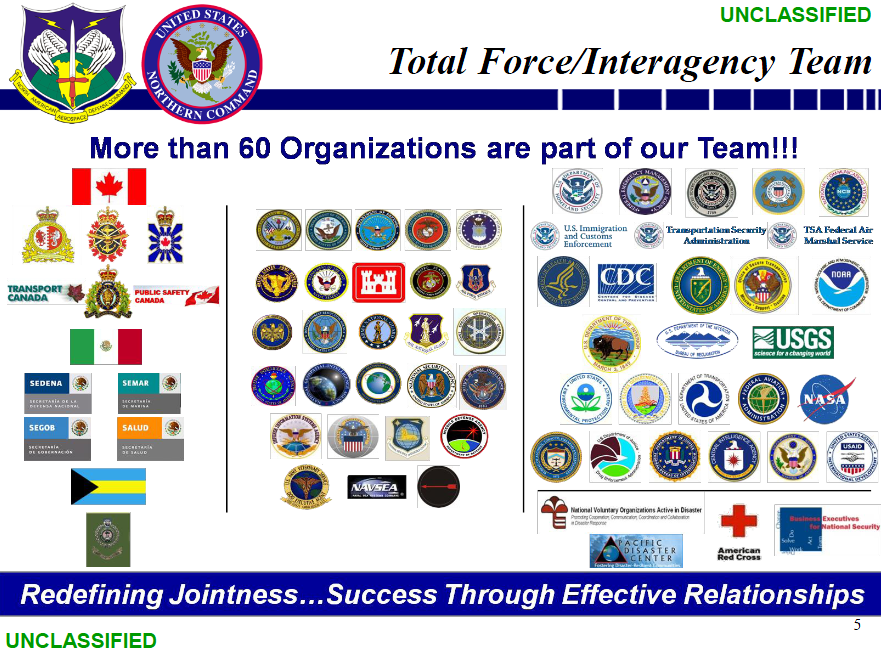 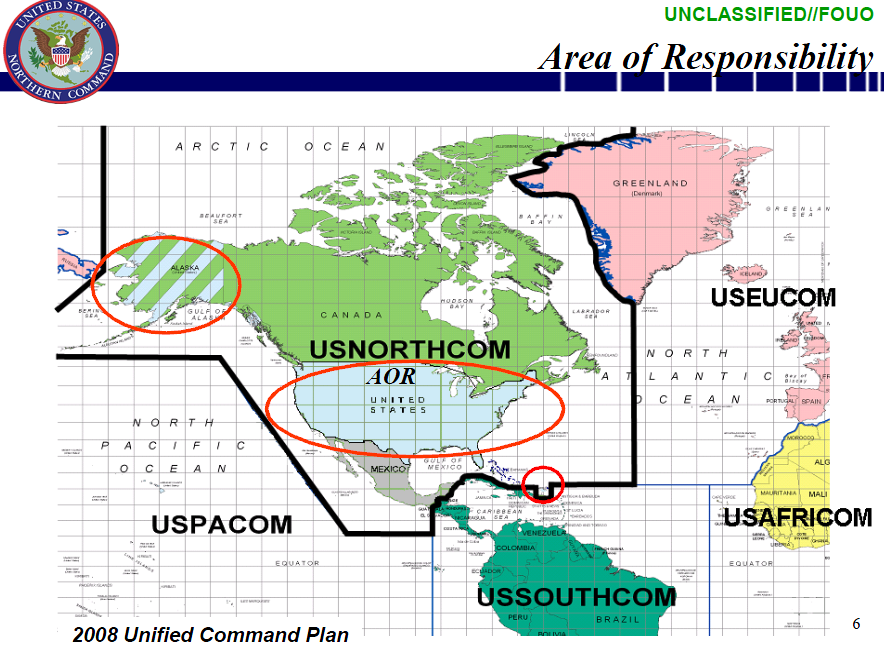 CBRNE CM Key Assumptions
•There will be little to no warning before a CBRNE incident
•SecDef will approve civilian agency requests for DOD assistance IAW the NRF and applicable laws and policy
•At the request of civil authorities, DOD forces in the local area will respond to the CBRNE incident under Immediate Response authority. If the forces are to remain at the incident site, CDRUSNORTHCOM will request Operational Control (OPCON) of those forces
•Appropriate elements of the National Guard will be involved in all CBRNE CM operations
•National Guard forces responding to an incident in a non-Title 10 role, such as Governor deployment or EMAC request, will not operate under control of federal authorities

CBRNE CM Facts
•DHS, through FEMA, leads the Nation’s efforts in response to catastrophic incidents
•DHS responds to incidents IAW the NRF
•USNORTHCOM supportsDHS’s efforts by conducting CBRNE CM, a specific form of DSCA
•DOD is a Supporting Agency for all Emergency Support Functions (ESFs) except ESF 3 (Public Works and Engineering)
•USNORTHCOMCBRNE CM operations are will be part of a coordinated effort between local, state, and federal mission partners
•USNORTHCOM must receive an approved RFA to conduct CBRNE CM
•This plan is specific to US territories within the USNORTHCOM AOR

When directed by the SecDef, CDRUSNORTHCOM conducts Consequence Management in the 48 contiguous States, the District of Columbia, and Alaska, to support civil authorities in response to Chemical, Biological, Radiological, Nuclear, and High-Yield Explosive events.

End State: USNORTHCOM CBRNE CM operations conclude when directed by the SecDef, the effects of the incident are mitigated, civil authorities assume full responsibility with no degradation of operations, and OPCON of deployed DOD assets, less those assigned to USNORTHCOM, is transferred back to their respective commands.

•CDRUSNORTHCOM must receive an RFAfrom primary Government agency to employ forces as defined by the SecDef-approved Joint Staff CBRNE CM EXORD
•Federal forces can only be placed under the command of Title 10 authorities
•In accordance with United States Code, Title 18, Section 1385 (Posse Comitatus Act), Title 10 military personnel shall not be employed to enforce or execute civil law, except as otherwise provided by law
•Intelligence collection on U.S. persons is restricted by Executive Order 12333 and DOD policy
•There are four mobilization sections contained in Title 10, United States Code (U.S.C.) Section 12301 thru 12304. These sections restrict the ability to rapidly mobilize reserve forces, including the National Guard, for DSCA events, unless the event involves WMD or a terrorist attack 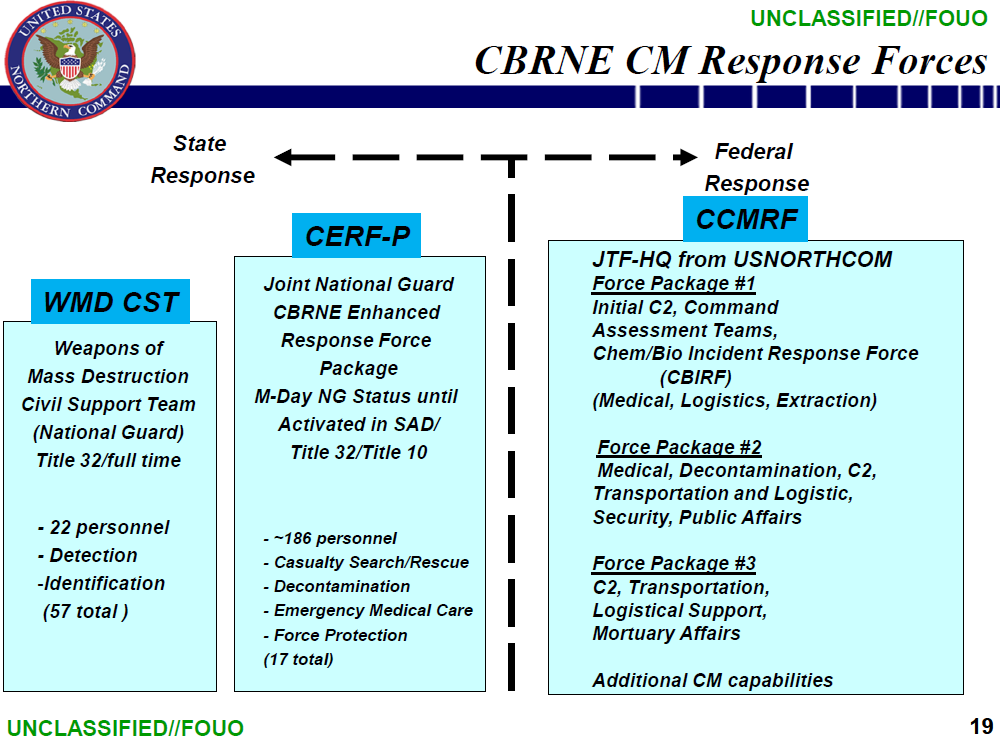 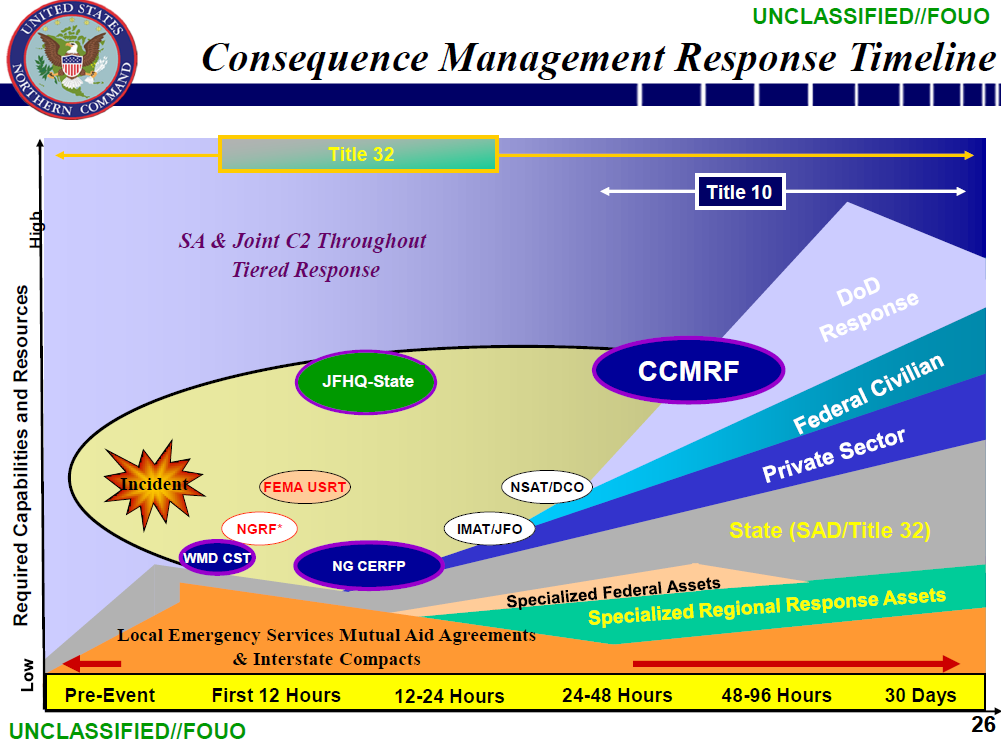