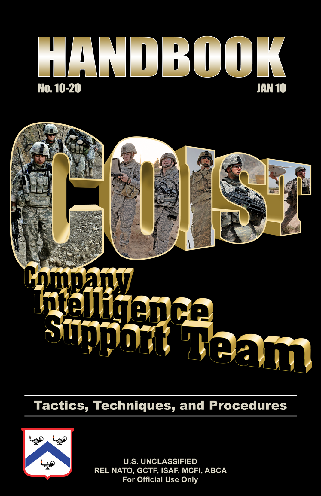 The mission of COISTs is to describe the effects of the weather, enemy, terrain, and local population on friendly operations to reduce uncertainty and aid in decision making. This is a simple and clear mission with a powerful purpose. However, the operation of the company COIST is far from simple. Company leaders must review and interpret huge volumes of data on a daily basis to determine their relevance and relationships. A few examples of this data include weapons intelligence team reports, patrol debriefs, intelligence summaries (INTSUMs), link diagrams, and be-on-the-lookout (BOLO) lists. Although the commander will determine and direct the exact requirements for the COIST, specified and implied tasks usually include targeting; intelligence, surveillance, and reconnaissance (ISR); patrol briefings and debriefings; detainee operations; and site exploitation.

The COIST provides a 24/7 analytical, production, and dissemination capability at the company level, which gives the commander options to exploit enemy vulnerabilities. Analysis is focused on the company OE, with the ability to report and help populate the overall battalion (BN) and brigade combat team common operational picture. If managed properly, a COIST will assist the commander in managing battlefield effects and operational expectations across all full spectrum operations. COIST operations in a COIN environment are typically conducted in conjunction with the company fire support team. The company commander establishes a COIST that is a company-level intelligence section and provides an
array of capabilities to the company. The COIST is part of the command post or fusion cell and has the following responsibilities:

Key tasks for COIST operations include the following: