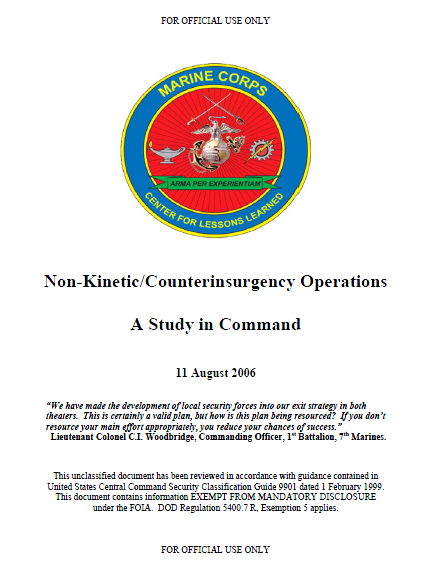 Non-Kinetic/Counterinsurgency Operations: A Study in Command

This paper summarizes the responses of six Marine battalion commanders who served in stability and support operations (SASO) and counterinsurgency (COIN) environments of Operation Enduring Freedom (OEF) and Operation Iraqi Freedom (OIF). These commanders were interviewed on their approach to their duties, how they exercised their authority and balanced the use of kinetic and non-kinetic effects in accomplishing their myriad missions and tasks. The content of this report may serve to guide future commanders.

The intent of this report is to capture the command philosophies, observations and lessons of
commanders whose units operated in primarily non-kinetic environments in order to
disseminate essential lessons learned to future commanders and leaders of units deploying to
OEF and OIF. MCCLL conducted interviews with selected commanders in order to capture
their philosophies, TTPs and methods of command utilized in non-kinetic operational
environments.

Overall assessment. Nearly all the training received was effective. Some of the SLACtrained
Marines were better than others, but some language training is better than nothing.
There is a need for more marksmanship training against moving targets at 50-300 yards.
Also maintain or increase the amount of “Second Block” (separating opposing
factions/warlords in the “Three Block War” metaphor) training in an urban environment.29
Small Unit Leadership. The most significant area where units need work is small unit
leadership; getting NCOs, SNCOs and junior officers to enforce tactical discipline and force
their Marines to not “take the easy way” was a long-term challenge. Units need to get early
buy-in from junior leaders that those leaders are responsible for the tactical discipline of their
units.

Continuing actions. The biggest issue was internal to the unit. It is vital to develop a
uniform standard for all squads, platoons, and companies so that there is a “full magazine” of
small units to put in the fight. If one unit is less capable, then one has less combat power
and they will not become more capable once they make contact. Some units will by default
become FOB security or detention facility security because they are less capable of other
tasks. The trouble happens when there is no alternative but to send one of these units outside
the wire.

Designated marksman. Expand on a designated marksmanship capability; a school trained
sniper is not necessarily needed. More precision shooting reduces collateral damage and
having a greater capability across the force with SAM-R or MK11 (7.62) should be looked
at.

Crew-served weapons. The Marine has to be confident with his weapon system and to be
confident on all machine guns. The average Marine would find himself on a machine gun: a
50 cal or a M240G. For non-kinetic operations, the Mark 19 was rarely used unless the
intent was to “kick a**” and commanders knew when they were going to do that. The 50 cal.
and mortar were used, but the best – more importantly – was the M240G, a smaller weapon
system. The Mark 19 is a great weapon for high kinetics and you want to blow everybody up.
For training, we should be more proficient on machine guns for what we’re doing over
there.

Driver training. “One thing that we’re lacking terrible is vehicle driving.” Every Sergeant
and below needs to be a vehicle driver and it needs to be on an up armored vehicle. One
commander had 210 vehicles and two deaths from rollovers. Of 126 drivers, most were in
Weapons Company and H&S Company, but every rifle company had 9 up armored
HMMWV’s for a Mobile Assault Platoon plus a spattering of up armored high-backs which
is the most dangerous vehicle over there because we pile all the armor on it and the
suspension is not made to haul that amount of weight. We say they have to have a license,
but we give them a license back at Camp Lejeune that teaches them how to drive a soft skin
HMMWV on a hardball road and they turn their blinkers on correctly and wear a seatbelt and
drive for 50 hours. That’s worthless driving. They need to be able to drive in the sand and
the dirt with these heavy vehicles and it needs to be every Sergeant and below to be able to
get behind a vehicle and drive it anytime. Additionally, they need to be driving those heavy,
up-armored vehicles. The high back vehicles are dangerous. The enemy has caused us to
pile all this armor on there by blowing us up and it’s caused deaths in other ways when
you’re conducting distributed operations all over the battlefield like we were – 14 different
battle positions – everybody’s got to be able to drive when you have 210 vehicles.