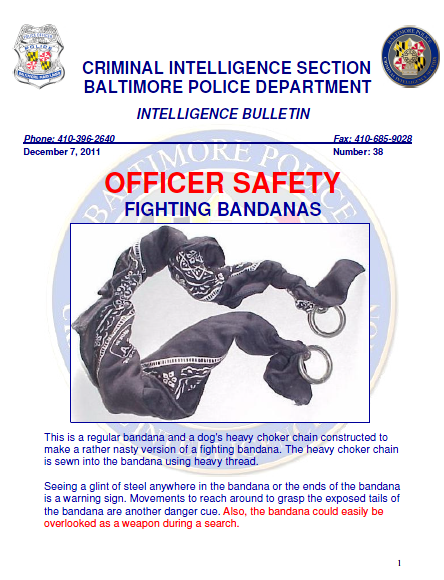 Seeing a glint of steel anywhere in the bandana or the ends of the bandana is a warning sign. Movements to reach around to grasp the exposed tails of the bandana are another danger cue. Also, the bandana could easily be overlooked as a weapon during a search.

This is a common bandana that you can purchase anywhere. You fold it as you would to use it for a headband, then fold that in half so the tails of the bandana meet.

You then simply sew up each side of the bandana where the fold is until you have a pocket.

Anything can then be placed in the pockets to include a roll of coins, a socket from a set of wrenches, a long spark plug socket or a cylindrical piece of metal.

Officers should remember that a harmless bandana in someone’s back pocket might not be so harmless.