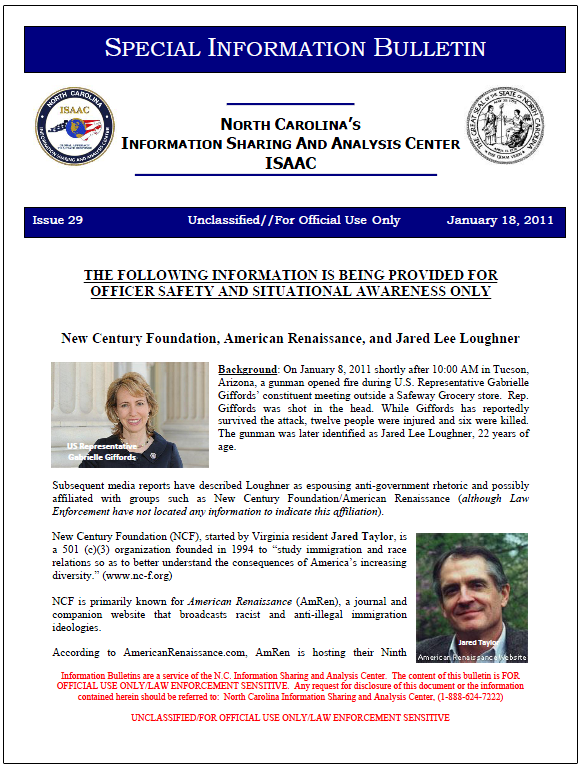 Background: On January 8, 2011 shortly after 10:00 AM in Tucson, Arizona, a gunman opened fire during U.S. Representative Gabrielle Giffords’ constituent meeting outside a Safeway Grocery store. Rep. Giffords was shot in the head. While Giffords has reportedly survived the attack, twelve people were injured and six were killed. The gunman was later identified as Jared Lee Loughner, 22 years of age.

Subsequent media reports have described Loughner as espousing anti-government rhetoric and possibly affiliated with groups such as New Century Foundation/American Renaissance (although Law Enforcement have not located any information to indicate this affiliation).

New Century Foundation (NCF), started by Virginia resident Jared Taylor, is a 501 (c)(3) organization founded in 1994 to “study immigration and race relations so as to better understand the consequences of America’s increasing diversity.” (www.nc-f.org)

NCF is primarily known for American Renaissance (AmRen), a journal and companion website that broadcasts racist and anti-illegal immigration ideologies.

According to AmericanRenaissance.com, AmRen is hosting their Ninth American Renaissance Conference February 4-6, 2011 in Charlotte, NC. Their website does not currently list the conference location, “in order to ensure security”. The website details that the location will only be announced 48 hours before the start of the conference. The group’s secrecy regarding venue may be to prevent counter protesters from disrupting the event and to prevent another cancelled conference.

AmRen conferences are held bi-annually. Previous conferences were held in Northern Virginia from 2002 to 2008. The 2010 conference was cancelled after Taylor claimed the venue hosting the conference had received threats from anti-racist groups. Law Enforcement in Virginia have indicated that while past conferences have occurred without major disruptions, counter protesters have presented the biggest security challenge.

Previous conferences have attracted as many as 300 attendees from all over the country and world. Speakers typically focus on racial divide and race relations and their impact on white culture. This year’s conference will feature ten speakers including a “mystery speaker” and British speaker Jonathan Bowden (www.amren.com/conference/2011).

Current open source reporting indicates that the Tucson, Arizona shooter, Jared Lee Loughner, has loose connections with NCF. However, Taylor has denounced Loughner saying “No one by the name of Loughner has ever been a subscriber to American Renaissance or has ever registered for an American Renaissance conference. We have no evidence that he has even visited the AR website.” AmRen goes on to say that they condemn violence and they are not “anti-government, anti-Semitic, or anti -ZOG (Zionist Occupational Government).”

Media reports have surfaced claiming to have access to a Department of Homeland Security memo that details Loughner’s connection to AmRen. ISAAC has found no evidence that DHS released a document regarding NCF, AmRen, and/or a connection to Jared Lee Loughner. Loughner allegedly posted links to AmericanRenaissance.com on his blog and other websites, leading to the conclusion that he is a member. ISAAC nor its partner agencies have any information to indicate Loughner was/is affiliated with NCF or AmRen.

Outlook: In light of the Tucson, Arizona incident and the public and media’s perception that Loughner is somehow affiliated with New Century Foundation/American Renaissance, ISAAC would like to emphasize that counter protestors may be present at the Charlotte conference. Additionally, previous conferences have occurred with no major disruptions.