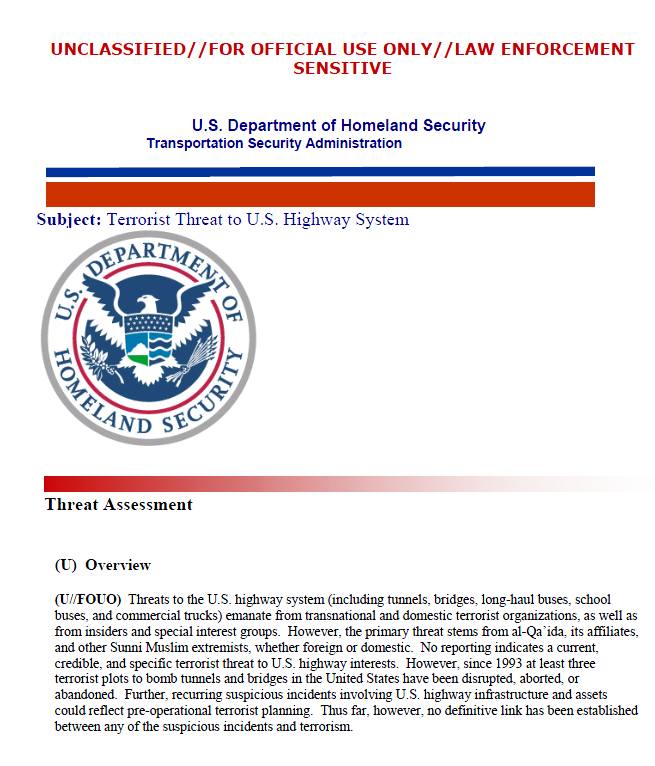 (U//FOUO) Threats to the U.S. highway system (including tunnels, bridges, long-haul buses, school buses, and commercial trucks) emanate from transnational and domestic terrorist organizations, as well as from insiders and special interest groups. However, the primary threat stems from al-Qa’ida, its affiliates, and other Sunni Muslim extremists, whether foreign or domestic. No reporting indicates a current, credible, and specific terrorist threat to U.S. highway interests. However, since 1993 at least three terrorist plots to bomb tunnels and bridges in the United States have been disrupted, aborted, or abandoned. Further, recurring suspicious incidents involving U.S. highway infrastructure and assets could reflect pre-operational terrorist planning. Thus far, however, no definitive link has been established between any of the suspicious incidents and terrorism.
…

(U) Most Likely Actors

(U//FOUO) The most significant threat to the U.S. highway system is from al-Qa’ida and affiliated groups, to include al-Qa’ida sympathizers within the United States. Other transnational groups, such as Lebanese Hizballah and the Palestinian Islamic Resistance (HAMAS), maintain a presence in the United States; however, such groups are not likely to attack the United States absent a major provocation, such as U.S.-led military action targeting Iran or them. Although no information indicates a current threat, Hizballah has been linked to previous anti-U.S. terrorist attacks, including the bombings in Beirut, Lebanon, of the U.S. Embassy and U.S. Marine Barracks in 1983, and of the U.S. Embassy Annex in September 1984.

(U//FOUO) Al-Qa’ida, its affiliates, and like-minded jihadists pose the most serious threat to the U.S. highway infrastructure. Militants associated with al-Qa’ida have been linked to actual and suspected terrorist plots aimed at tunnels and bridges inside the United States and elsewhere overseas. Even if an attack on a tunnel or bridge did not cause it to collapse, the resulting damage would likely temporarily close the structure, snarl traffic, and frighten commuters.

(U//FOUO) Domestic right-wing and special interest groups are also of concern. In November 1996, three members of the Georgia Republic Militia were convicted for possession of explosive devices, illegal weapons, and conspiracy to use a weapon in a violent crime. The men had threatened to attack government infrastructure, to include bridges, in response to a perceived takeover of the United States by “United Nation Forces.” In addition, the FBI assesses that special interest extremism focusing on environmental and animal rights has increased. Two of the noteworthy special interest groups are the Animal Liberation Front (ALF) and the Environmental Liberation Front (ELF). The ELF historically has used incendiary devices to damage and destroy construction sites and equipment, to include equipment used to build logging roads.

(U//FOUO) Left-wing groups also pose a potential threat to the U.S. highway system. These groups advocate civil disobedience to draw attention to their cause, and often use traffic disruption techniques such as blockading bridges, tunnels, and economically or politically important highway corridors. In 2000, during a 2000 meeting of the International Monetary Fund in Washington, D.C., activists posing as FBI agents asked local officials to close major transportation routes and high-occupancy vehicle lanes during peak traffic hours. Protestors have also used low-yield explosives and incendiary devices such as Molotov cocktails and stink bombs to disorient crowds and law enforcement officers.

(U//FOUO) Religious extremists pose a potential terrorist threat in the United States. The Jammat-ul-Fuqra (JUF) is a Sufi Islamic extremist sect of predominantly African-American Muslims with an estimated 1,000 to 3,000 members nationwide. The JUF seeks to purify Islam through violence, and has links with al-Qa’ida. In 1993, a JUF member was arrested as part of the Ramzi Yousef plot to bomb sites in New York City, to include the Lincoln and Holland Tunnels and the George Washington Bridge. A 1989 raid of a JUF residence by Colorado law enforcement uncovered surveys of electrical, gas, oil, and water facilities in Colorado, suggesting possible JUF intentions to attack such infrastructures.