The following interim guidelines for prosecuting communications sent via social media were released December 19, 2012 by the Crown Prosecution Service. 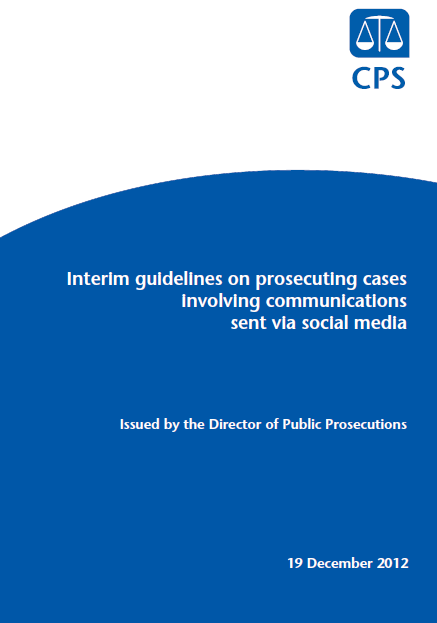 These guidelines set out the approach that prosecutors should take when making decisions in relation to cases where it is alleged that criminal offences have been committed by the sending of a communication via social media. The guidelines are designed to give clear advice to prosecutors who have been asked either for a charging decision or for early advice to the police, as well as in reviewing those cases which have been charged by the police. Adherence to these guidelines will ensure that there is a consistency of approach across the CPS.

These guidelines are interim guidelines and they have immediate effect. At the end of the public consultation period, they will be reviewed in light of the responses received. Thereafter final guidelines will be published.

12. Communications sent via social media are capable of amounting to criminal offences and prosecutors should make an initial assessment of the content of the communication and the course of conduct in question so as to distinguish between:

(1) Communications which may constitute credible threats of violence to the person or damage to property.

(3) Communications which may amount to a breach of a court order. This can include offences under the Contempt of Court Act 1981 or section 5 of the Sexual Offences (Amendment) Act 1992. All such cases should be referred to the Attorney General, and via the Principal Legal Advisor’s team where necessary.

(4) Communications which do not fall into any of the categories above and fall to be considered separately (see below): i.e. those which may be considered grossly offensive, indecent, obscene or false.

13. As a general approach, cases falling within paragraphs 12 (1), (2) or (3) should be prosecuted robustly where they satisfy the test set out in the Code for Crown Prosecutors. Whereas cases which fall within paragraph 12(4) will be subject to a high threshold and in many cases a prosecution is unlikely to be in the public interest.