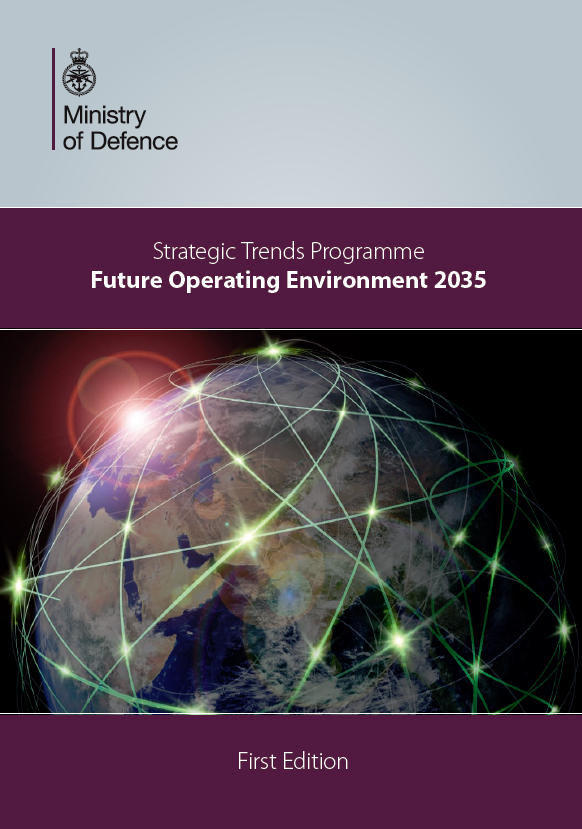 The Future Operating Environment 2035 (FOE 35) forms part of the Development, Concepts and Doctrine Centre’s (DCDC) Strategic Trends Programme. DCDC is the MOD’s independent think tank and, as such, FOE 35 does not represent the official position of Her Majesty’s Government. It supersedes the 2010 Future Character of Conflict (FCOC) and aims to: describe the characteristics of the 2035 operating environment to provide evidence-based insights that can inform future Defence capability development. FOE 35 describes the potential characteristics of the future operating environment, and is designed primarily to inform UK Defence and security policy-makers and our Armed Forces more broadly. However, it is intended to have applicability across UK Government and agencies to help inform their understanding of the future operating environment in which we all (military, other UK Government departments, international organisations and agencies) may find ourselves operating in 2035.

As part of DCDC’s Strategic Trends Programme, FOE 35 uses Global Strategic Trends – Out to 2045, Fifth Edition (GST 5) as its foundation. Extensive contributions were garnered from across Defence, UK Government, think tanks, academics, non-governmental organisations and other UK and international institutions. Following gap analysis, additional directed commissions were produced. Subsequent proactive engagement by DCDC with a broad range of contributors has provided essential peer review and challenge functions for this product in pursuit of robustness and resilience.

Blurring of the overseas and mainland threat. Greater interconnectivity may mean that, without mitigation measures, critical infrastructure within the UK becomes increasingly exposed and vulnerable to remote attack, particularly from cyberspace. Borders will almost certainly be more porous by 2035, facilitating higher levels of migration. Larger immigrant diasporas are likely to maintain closer ties with their country of origin, through better communication links, such as social media. As a result, events abroad are likely to have a more direct impact at home. Military operations overseas may be influenced by the concerns of UK diaspora communities, such as the desire to provide humanitarian assistance to victims of a natural disaster from their country of origin. While it is possible that UK society may be less homogenous as a result of larger, better-connected diasporas (and the potential security challenges they may bring), a more globally-engaged population could also present significant opportunities.

Public attitudes to operations. External scrutiny of the military (along with other public organisations) is likely to increase out to 2035. In liberal democratic societies, public and parliamentary opinion impacts military operations and governments’ willingness to deploy armed forces. When faced with a direct or existential threat, public and parliamentary opinion is likely to be resolute. But, when faced with more obscure, indirect threats to national security, interests and prosperity, public opinion can vary regarding so-called ‘wars of choice’. While current trends may suggest public unease with UK military intervention – with particular concerns over casualties, cost and longevity – such discomfort could reverse in the future. Shock events may change reticence overnight. Technology, such as automated systems, may also afford new opportunities.

Non-state actors. By 2035, some non-state actors – multinational corporations, non-governmental organisations and city authorities – are likely to be more influential than they are today, having a greater impact on world affairs. Cooperation between state and non-state actors will sometimes be essential, with three-way engagement between militaries, non-governmental organisations and multinational corporations becoming increasingly important. Given trends towards greater and more complex urbanisation, engagement with city authorities will be particularly relevant for urban operations. Extremist non-state actors, often driven by ideological and criminal concerns, will also persist. By 2035, extremists will almost certainly be more able to exploit information technologies, with the potential to significantly disrupt communication and economic links. Extremists may also be able to employ a wider array of military capabilities (albeit on a limited scale), using innovative tactics that exploit our inherent vulnerabilities, including any institutional inertia. They are likely to develop ever-higher levels of lethality to counter our protection systems and may even have access to weapons of mass effect. To achieve continued impact, extremist non-state actors may seek to deliver progressively more ‘spectacular’ and violent acts that ultimately lead them to be alienated and isolated. However, where successful, these may cause mass casualties on a scale not yet seen,19 with significant economic, social and institutional impact. The links between extremist nonstate actors and more powerful criminal organisations are likely to be maintained. Distinguishing between criminals and terrorists may become more difficult over the next 20 years. 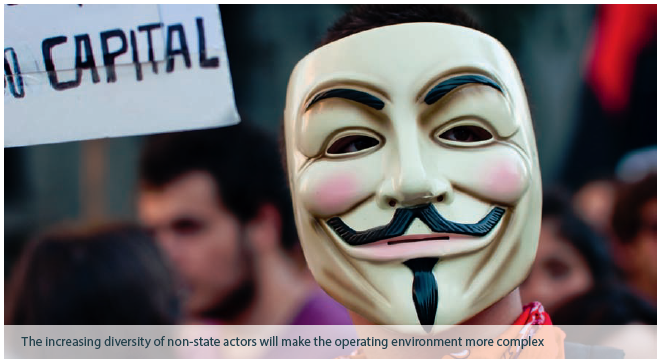 Information and communications Out to 2035, our Armed Forces will continue to rely on information and communications for: operations; political support at home; and strategic influence around the world. Information and communications technology. Information systems development will be increasingly driven by the commercial sector. By 2035, computers will more frequently connect, collect and share data with other devices seamlessly and without human intervention or (in some cases) knowledge – the so-called ‘Internet of Things’. Practically unlimited data storage will be available on micro-scale devices, driven by the growing volume of digital data. Defence will need to continue to understand the impact on privacy, assurance, jurisdiction and security for data stored on any foreign-based servers. Such data servers will become an important part of critical national infrastructure, but may not have the type of protection afforded by UK sovereignty.

Big Data analytics. The opportunities provided by the growing volume of data will increase, as will the risk of information overload.Big Data analytics (the ability to collect and analyse a vast amount of information quickly) will become increasingly important and sophisticated over the next 20 years. Organisations, including non-state actors, will seek to gain information advantage. Like many state actors using Big Data analytics, they will be able to uncover patterns and correlations to create probabilistic forecasts. By 2035, language processing, anomaly detection and visualisation tools will be far more prevalent and will identify activities and trends much earlier than conventional techniques.

Surveillance. By 2035, persistent real-time, multi-sensor surveillance capabilities will be ubiquitous, cheap and passive, offering considerable advantage to a range of actors. This will have significant implications for operational security and counter-surveillance techniques. Surveillance capability is likely to be exploited through sensors distributed across all environments, including space. Surveillance throughout cyberspace will be increasingly evident. By 2035, sensors will be integrated with weapon delivery systems that track multiple targets.