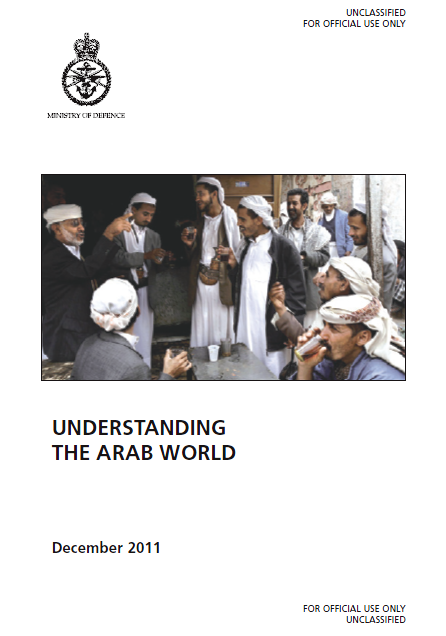 The Arab World is a vast area which is home to diverse people, many of whom have experienced considerable change since the start of 2011. The way in which people behave and interact with you will therefore vary greatly across the region. This guide discusses aspects of Arab culture that you might experience in Algeria, Bahrain, Egypt, Iraq, Jordan, Kuwait, Lebanon, Libya, Mauritania, Morocco, Oman, the Palestinian Territories, Qatar, Saudi Arabia, Sudan, Syria, Tunisia, UAE and Yemen. Further reading on individual countries is recommended before you deploy.

Most Arabs are Sunni Muslims who speak Arabic. However, there are many different religions, ethnic and social groups in the Arab world, among them Christians, Jews, Shi’a and Sunni Muslims, Kurds, Turks and Berbers. Some of these groups have a difficult time in their countries, but many live happily as Arabs and as part of Arab society. While some Arab countries are very conservative and have strict rules about the role of women, others are more Westernised in their approach to issues like alcohol, religion and education. The familiar stereotype of the Bedouin Arab with his camel, tent, robes and blood feuds is only a small part of Arab identity and history. In fact, this traditional way of life has died out in many parts of the Arab world, and is not significant today in areas like North Africa. Today’s Arab population is mostly young, as seen during the 2011 Arab Spring, and many Arabs are very Westernised.

Life for men and women in the Arab world is complex, and varies greatly between countries. Generally men and women occupy separate spheres, with men engaging in public and women being responsible for the private sphere. There are significant differences between male and female education and employment opportunities. In some countries only caring and domestic roles (such as nursing, teaching and midwifery) are filled by women. Women’s illiteracy remains about 60% across the region, and laws on marriage, divorce and inheritance tend to favour men.

The honour of an Arab family is linked to the sexual honour of its women. Any action that breaks the strict rules about how men and women should behave can ruin family honour. A woman’s honour is at risk from attention from unrelated men, which is why women veil in the presence of people outside their immediate family. In particular, a woman’s hair is seen as a point of glory in her beauty and must be covered up (men are also required to cover their arms and legs). While veiling is universal in the more conservative countries like Saudi Arabia, Yemen, Kuwait, Bahrain, Oman, Qatar and the UAE, in other countries such as Jordan, Lebanon, Egypt and Syria it is a question of personal choice and many women do not cover their hair in public. In Tunisia, veiling in public is outlawed. However, overall, the custom is becoming more common across the region. The fact that veiling allows women to engage in public life suggests that this can be viewed as part of a feminist drive. Types of veils include the hijab, covering the hair, neck and shoulders; the nikab which covers the face below the upper cheeks and bridge of nose; and the burqa, a complete body covering with slit for eyes and nose.

Under Muslim law, men are allowed up to four wives, as long as he can provide equally for all of them. In reality this practice – polygamy – is rare and practiced only by some wealthy Gulf sheikhs or nomadic Bedouins. Polygamy is outlawed in Tunisia and discouraged in Morocco.

Muslim law discourages divorce but it is not illegal in the Arab world. It is more difficult for women to divorce their husbands than vice versa, and it is extremely difficult for them to do so in Saudi Arabia. A woman faces a difficult future if she is divorced by her husband. Homosexuality is illegal in most Arab countries. 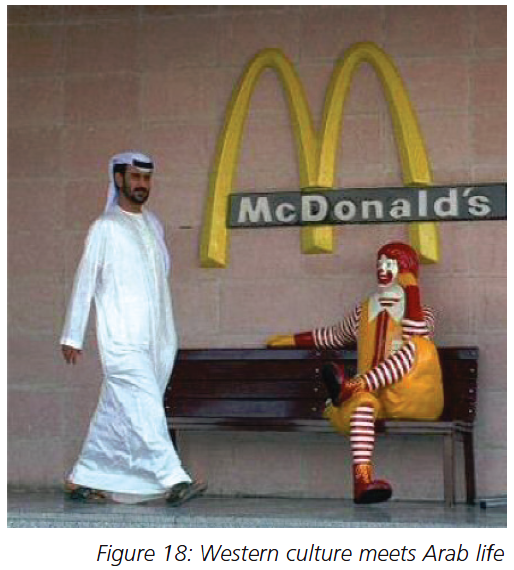 A clash of civilisations

Many Arabs blame Western nations, particularly Britain and France, for creating artificial states in the region whose borders have caused tension ever since. The political problems faced by many Arab countries over the past 50 years are often viewed as a direct result of earlier Western colonial policies. In addition, to many in the religious establishment, Western culture is perceived as a threat to traditional Islam, and there are concerns about the attraction of some Western values to young Arab people.

Westerners are often perceived as culturally arrogant, unjustifiably regarding their culture as superior to that of Arabs. The recent history of the Arab world, including the Iraq war, has been extremely painful for many. However, 2011’s Arab Spring has arguably provided many Arabs with a new sense of empowerment.

The foundation of Israel in 1947 led to a sense of grievance that colours the outlooks of many Arabs. Israel’s hard-line policies towards the Palestinians is a key political issue for many people in the Arab world. The United States’ support for Israel (and to a lesser extent the UK’s support) represents evidence of the West’s double standards for many Arabs.