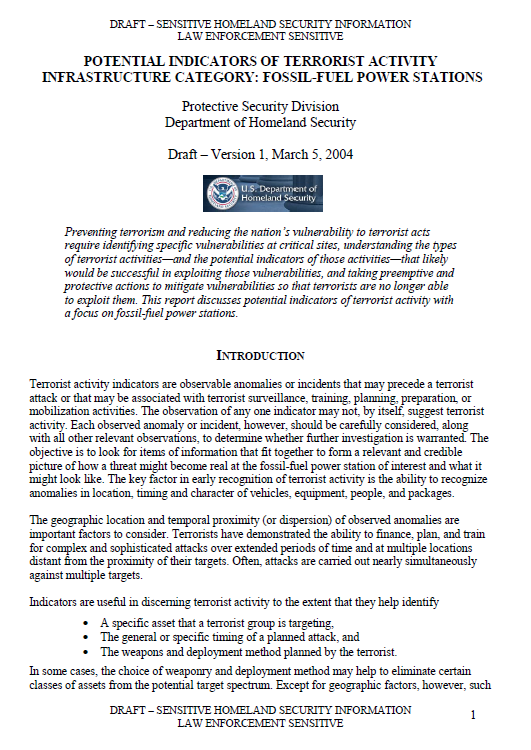 Steam power plants burn fossil fuel in the furnace of a steam boiler. Steam from the boiler expands through a steam turbine, which is connected to a drive shaft of an electric generator. The exhaust vapor expelled from the turbine condenses, and the liquid is pumped back to the boiler to repeat the cycle. Steam power plants are designed to use coal, natural gas, or oil. Before combustion gases can be exhausted to the atmosphere, they typically must be cleaned to reduce particulates, NOx, and SO2 to levels required by federal and state regulations.

Steam power plants are typically large units that range in size from about 50 to 1,200 megawatts
(MW). Because these plants are large and designed for high reliability and efficiency, they are
operated as long as possible and as closely to design capacity as possible. The operation of plants
in this manner is termed “base loading” a plant; that is, the plant serves the portion of the
electrical demand that is relatively constant throughout the entire day. The capacity factor (the
ratio of the number of hours the plant operates in a year to the total number of hours in a year) of
base-loaded plants often exceeds 65%.

Figure 2 shows a modern, coal-fired steam power plant. A conveyor to carry coal to the plant is
shown on the left, and the cooling towers of the plant are shown on the right.

Combustion turbine plants burn gaseous or liquid fossil fuels, namely natural gas or various
grades of oil. Combustion turbines are similar to aircraft jet engines. The fuel is burned in
a combustor, and hot gases expand through a turbine, which drives a generator to produce
electricity. Depending on the fuel and the regulatory requirements, exhaust gases may need to be
cleaned before being released to the atmosphere. A schematic diagram of a combustion turbine
generator is shown in Figure 3.

Combustion turbines used by electric utilities range in size from about 25 MW to about
250 MW. They are inexpensive, can be built quickly, and can be started and loaded very rapidly
(as short as two minutes from start to full load). Because of these characteristics, they operate as
peaking plants; that is, they operate only when necessary to satisfy the peak electrical demands
of the day—generally only a few hours each day. Their capacity factors are typically no more
than 10% to 15%. Because of their low capital cost, their operational flexibility, and the
reasonable natural gas prices, combustion turbines, either stand-alone or in combined-cycle
plants described in the following section, are expected to account for much of the new capacity
to be installed in the near future by electric companies.

Combined-cycle power plants combine a combustion turbine with a steam boiler to produce
electricity at a higher overall efficiency. The fuel, typically natural gas, is burned by using a
combustion turbine, and hot gases expand through a turbine to produce electricity. The exhaust
of the combustion turbine is then sent through a boiler, where steam is produced to drive a
turbine/generator. This design substantially improves the overall efficiency of the combustion
turbine or a conventional steam turbine. Figure 4 shows a schematic of one CC plant
configuration.

Coal is delivered to a coal-fired generating plant site by railroad, ship, barge, and occasionally
truck. It is placed in piles located outdoors as close to the plant as possible. For protection
against annoyance and injury to the public as well as pilferage, coal piles are fenced in. For
aesthetic reasons, however, in some cases the pile may be enclosed by a wall and landscaped.
The top and sides of the pile are often sprayed with a thin layer of road tar or asphalt to seal the
pile, preventing dust from becoming windblown and keeping out rain, moisture, and air. A baseloaded, coal-fired power plant may have a pile of coal sufficient to last for more than four months at 100% capacity.

Coal bunkers are installed as part of the plant structure not only to store a given quantity of coal
but also to maintain a continuous supply of coal to the boiler furnaces. A bunker may hold a
24- to 48-hour supply of coal. Coal is brought from the outside coal pile by truck, dragline,
conveyor, or other handling equipment. The bunker is the first stage of the process to prepare
coal for combustion in the furnace. Coal must be crushed, pulverized, and screened before it can
be burned. Figure 6 shows a coal-fired steam power plant with a coal pile and coal conveyor in
the foreground.