LNG is typically created in a three-step process. First, gaseous-form natural gas, extracted from
the ground in neighboring oil reservoirs, is “frozen” into a liquid state through a complex
cryogenic process (called liquefaction). The LNG boiling point is -260°F. In a liquid state, the
volume of the gas is greatly reduced; it would take 600 ships carrying natural gas to equal the
cargo contained on just one LNG tanker. Thus, it is practical and economical to import natural
gas from overseas. The density of LNG is 26.5 pounds per cubic foot, or less than half that of
water. LNG is odorless, colorless, non-corrosive, and nontoxic.

Second, after the gas is liquefied, it can be stored in cryogenic holding tanks or pumped directly
from the cooling vestibule into special insulated transportation vessels, such as railcars, trucks, or
ships. Third, upon delivery of the vessel to its final destination, LNG is pumped from the vessel
either into another cryogenic storage tank for later delivery or directly into a regasification unit
that uses sea water or air to reheat the LNG, converting it back into gaseous natural gas. The
Lake Charles, Louisiana, LNG Import Facility, owned by CMS Energy, is shown in Figure 1.
LNG tanks are always of double-wall construction with extremely efficient insulation between
the walls. Large tanks have a low aspect ratio (height to width) and are cylindrical with a domed
roof. Storage pressures in these tanks are very low, less than 5 pounds per square inch gauge
(psig). Smaller quantities of LNG (70,000 gallons and less) are stored in horizontal or vertical
vacuum-jacketed pressure vessels. These tanks may be at pressures anywhere from less than
5 psig to more than 250 psig. LNG must be maintained cold at a cold temperature (at least below
–117°F) to remain a liquid, independent of pressure.

The method of transporting and receiving LNG makes this energy source a matter of concern for
infrastructure protection. The intensely cold LNG is transported at atmospheric pressure in
special, heavily insulated cryogenic tankers to a marine terminal, where it is stored in insulated
tanks (Figure 1).

When needed, LNG can be piped to a nearby gasification plant, where it is vaporized and then
distributed to customers by pipeline, like wellhead gas.

There are different types of LNG facilities and operations. Three major LNG terminals in the
United States import LNG into the country (a fourth is about to start operations). Many more
LNG facilities exist in the United States in different sizes and configurations. Their purpose is to
store LNG either from conversion of natural gas or directly from delivery by truck for later
regasification. The LNG can then be injected into transmission and distribution systems during
peak natural gas periods.

When vaporized, LNG is combustible in the range of 5% to 15% volume concentration in air.
Neither LNG, nor its vapor, can explode in an unconfined environment. According to the project
manager for Westcoast Gas Services, Inc., who was discussing the proposed LNG facility in
Howe Sound, British Columbia, “Modeling of the absolutely worst case scenario by world class
LNG authorities has determined that the maximum potential area for damage is limited to a
3.5 kilometer radius. There would not be damage from an explosion but rather from the burning
of natural gas vapors dispersing from the site. Analysis by these authorities of more plausible,
though still unlikely, scenarios shows that the area of influence would not exceed 500 meters.
Beyond this point, the gas dispersing from any failure would be at a concentration lower than
one-half the lower flammability limit (i.e., less than one-half of 5%). There is no plausible event
that would result in the release of liquid natural gas from the earthen dike surrounding the site.”
There has been a concern that a boiling liquid expanding vapor explosion (BLEVE) could be a
possibility under the right circumstances for an LNG storage facility or tanker. Studies have
indicated that a BLEVE resulting from an LNG accident or terrorist attack is very unlikely
because tank and ship designs favor burning over explosion. The ignition and sustained burn of a
vaporized LNG cloud is difficult; multiple ignition sources would probably result in a burn back
to the source (Juckett 2002). 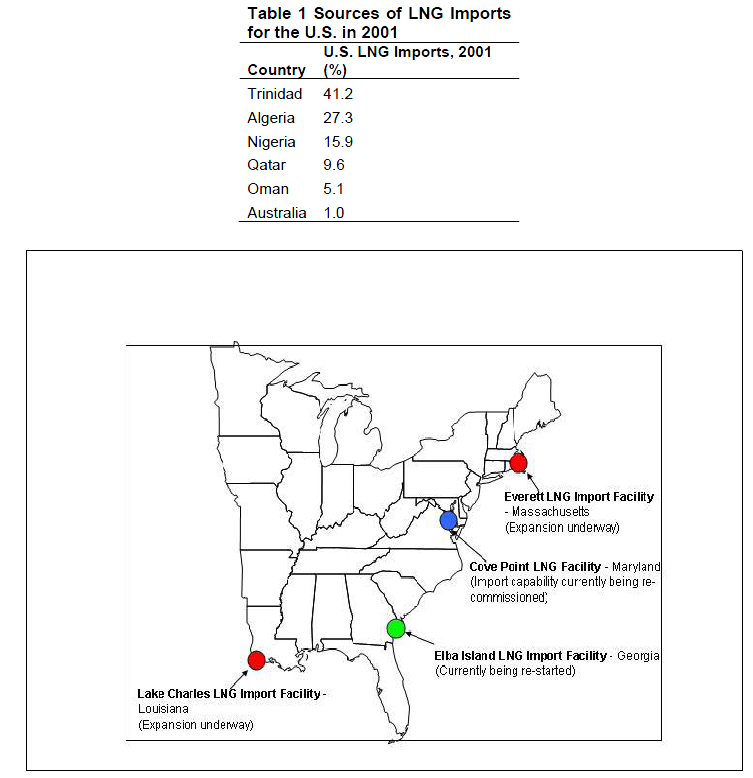