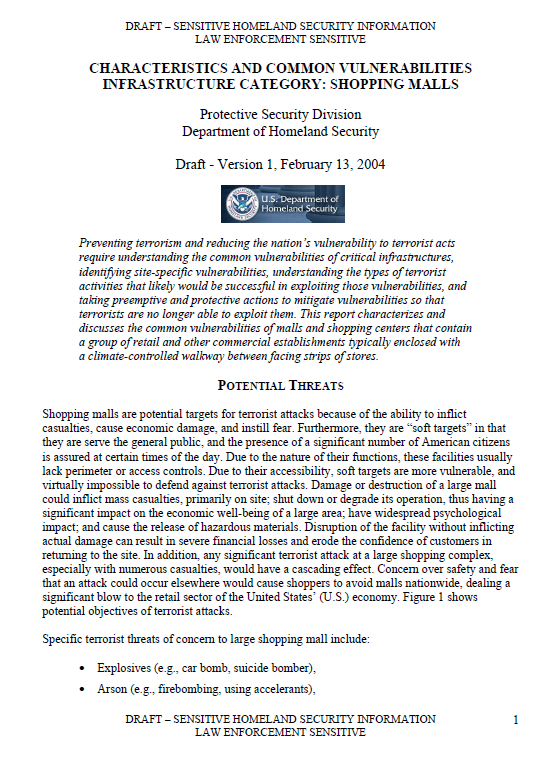 Shopping malls are potential targets for terrorist attacks because of the ability to inflict casualties, cause economic damage, and instill fear. Furthermore, they are “soft targets” in that they are serve the general public, and the presence of a significant number of American citizens is assured at certain times of the day. Due to the nature of their functions, these facilities usually lack perimeter or access controls. Due to their accessibility, soft targets are more vulnerable, and virtually impossible to defend against terrorist attacks. Damage or destruction of a large mall could inflict mass casualties, primarily on site; shut down or degrade its operation, thus having a significant impact on the economic well-being of a large area; have widespread psychological impact; and cause the release of hazardous materials. Disruption of the facility without inflicting actual damage can result in severe financial losses and erode the confidence of customers in returning to the site. In addition, any significant terrorist attack at a large shopping complex, especially with numerous casualties, would have a cascading effect. Concern over safety and fear that an attack could occur elsewhere would cause shoppers to avoid malls nationwide, dealing a significant blow to the retail sector of the United States’ (U.S.) economy. Figure 1 shows potential objectives of terrorist attacks.

Shopping malls are vulnerable to a number of natural events, such as tornados, hurricanes, and
earthquakes. Building codes and construction standards have been designed and adopted to
address these threats. There are also ongoing studies as to how to improve the ability of buildings
to withstand the impact of tornados, microbursts, and other wind-driven events. In many ways,
these are applicable to the potential structural impact of explosions caused by bombs.
Texas Tech University’s Wind Science and Engineering Research Center has studied the
construction of a variety of buildings, including large malls and the potential damage that
a tornado could cause to these structures as part of its Fujita Scale Enhancement Project. The
damage indicators developed during this activity are available online (see Useful Reference
Material at the end of this report).

The International Code Council (ICC) is a nonprofit organization dedicated to developing a
single set of comprehensive and coordinated national model construction codes. The founders of
the ICC were Building Officials and Code Administrators International, Inc., International
Conference of Building Officials, and Southern Building Code Congress International, Inc.
These nonprofit organizations had developed three separate sets of model codes used throughout
the U.S. In 1994, these groups combined to form the ICC and develop a single set of codes
without regional limitations. The ICC publishes a variety of references to building codes and
standards, including the International Building Code and state and local codes. It offers technical
publications that cover most topics associated with building structures. It also performs technical
evaluations of building plans and provides technical support to its members. The ICC home page
provides links to the organization’s publications and services.