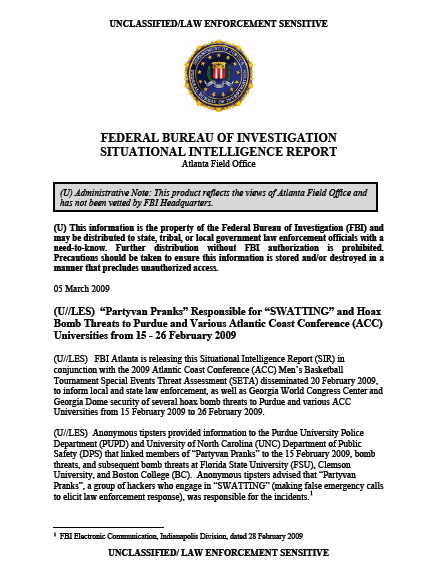 • (U// LES) Tyrone: A 15 year old white male from Raleigh, NC, whose true name is Ashton Lundeby. A tipster claims that Tyrone and other group members have “SWATTED” venues throughout the United States.

• (U// LES) Britfag: User name for a YouTube account. UNC DPS stated that Britfag’s voice in various YouTube videos matches the prank caller’s voice in both the UNC bomb threat and subsequent threat at FSU.

(U//LES) Specific dates for the recent bomb threats at each University are as follows:

Caller advised he placed three bombs in the Mechanical Engineering Building at 9:10 PM. A second caller made a hoax bomb threat shortly thereafter. The first caller then made two additional hoax bomb threats.

Caller advised he placed a bomb in the Leach Center. All personnel evacuated the building. Prank caller’s voice strongly resembles the caller from the UNC bomb threat.

(U// LES) FBI Atlanta assesses that “Partyvan Pranks” and other “SWATTERS” may target large venues in the future. There is no indication that “Partyvan Pranks” plan to “SWAT” the 2009 ACC Men’s Basketball Tournament; however, local law enforcement and event security need to be aware of the threat possibility because UNC, FSU, Clemson University, and BC will participate in the ACC Men’s Basketball Tournament in Atlanta, GA, 12-15 March 2009.