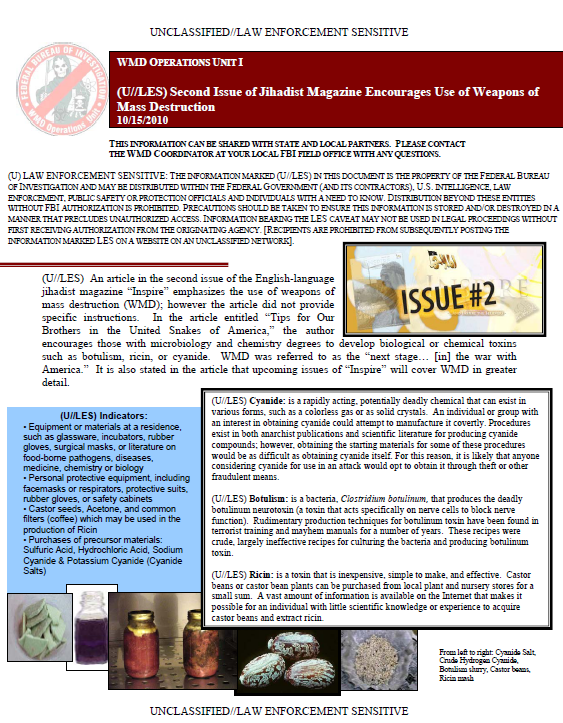 (U//LES) An article in the second issue of the English-language jihadist magazine “Inspire” emphasizes the use of weapons of mass destruction (WMD); however the article did not provide specific instructions. In the article entitled “Tips for Our Brothers in the United Snakes of America,” the author encourages those with microbiology and chemistry degrees to develop biological or chemical toxins such as botulism, ricin, or cyanide. WMD was referred to as the “next stage… [in] the war with America.” It is also stated in the article that upcoming issues of “Inspire” will cover WMD in greater detail.

(U//LES) Cyanide: is a rapidly acting, potentially deadly chemical that can exist in various forms, such as a colorless gas or as solid crystals. An individual or group with an interest in obtaining cyanide could attempt to manufacture it covertly. Procedures exist in both anarchist publications and scientific literature for producing cyanide compounds; however, obtaining the starting materials for some of these procedures would be as difficult as obtaining cyanide itself. For this reason, it is likely that anyone considering cyanide for use in an attack would opt to obtain it through theft or other fraudulent means.

(U//LES) Botulism: is a bacteria, Clostridium botulinum, that produces the deadly botulinum neurotoxin (a toxin that acts specifically on nerve cells to block nerve function). Rudimentary production techniques for botulinum toxin have been found in terrorist training and mayhem manuals for a number of years. These recipes were crude, largely ineffective recipes for culturing the bacteria and producing botulinum toxin.

(U//LES) Ricin: is a toxin that is inexpensive, simple to make, and effective. Castor beans or castor bean plants can be purchased from local plant and nursery stores for a small sum. A vast amount of information is available on the Internet that makes it possible for an individual with little scientific knowledge or experience to acquire castor beans and extract ricin.