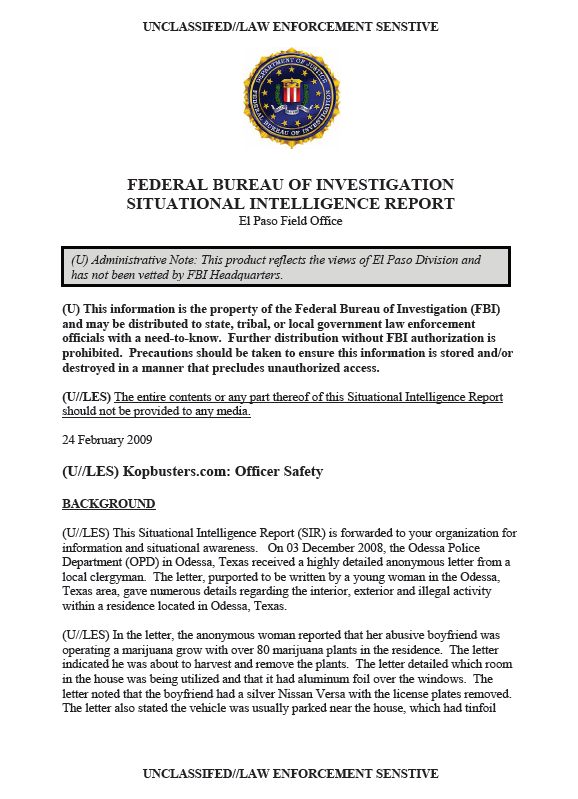 (U//LES) This Situational Intelligence Report (SIR) is forwarded to your organization for information and situational awareness. On 03 December 2008, the Odessa Police Department (OPD) in Odessa, Texas received a highly detailed anonymous letter from a local clergyman. The letter, purported to be written by a young woman in the Odessa, Texas area, gave numerous details regarding the interior, exterior and illegal activity within a residence located in Odessa, Texas.

(U//LES) In the letter, the anonymous woman reported that her abusive boyfriend was operating a marijuana grow with over 80 marijuana plants in the residence. The letter indicated he was about to harvest and remove the plants. The letter detailed which room in the house was being utilized and that it had aluminum foil over the windows. The letter noted that the boyfriend had a silver Nissan Versa with the license plates removed. The letter also stated the vehicle was usually parked near the house, which had tinfoil covering the windows, an air conditioner near the bedroom window and $19,000 in cash stuffed in the fireplace.

(U//LES) OPD initiated surveillance at the residence located in Odessa, Texas. It was determined that the address was a valid address and officers found the residence consistent with the details of the letter regarding the vehicles, AC unit, windows with aluminum foil and a chimney. Based on information found during the investigation, a search warrant for the residence was obtained.

(U//LES) When the search warrant was executed, officers found the front door unlocked and the house nearly empty. There were grow lights in the room as described in the letter but the plants were two miniature Christmas trees. No marijuana plants were found in the residence. On one wall there was a poster informing the officers that they had been set up and were part of a “Kopbusters’ Internet” reality show and a shirt with the words “Free Yolanda” on it. As the search progressed the officers discovered that several rooms in the interior of the house were wired for streaming video and sound.

(U//LES) It was later determined that Barry Cooper, CEO of Kopbusters, and a former narcotics investigator, arranged this ruse in an attempt to insinuate that the OPD officers were corrupt. Barry Cooper stated that he staged this fake drug house to shed light on 4th Amendment violations conducted by the OPD. Initially, Barry Cooper claimed that the OPD investigators lied in the affidavit, alleging that they indicated to the Judge that an unidentified informant made a narcotics purchase from the house. No mention of an informant was contained in the affidavit.

(U//LES) Pursuant to an interview with Barry Cooper, he did not admit to producing the letter but subsequently made a statement that Kopbusters sent the letter. Cooper claimed within six months he will set-up on the OPD investigators again and that he is setting up pranks in other communities as he is going to make a new reality TV show out of them.
ASSESSMENT

(U//LES) Barry Cooper operates a website: Never Get Busted.com were he sells self-produced videos titled “Never Get Busted Again,” “Never Get Raided” and a police training video on locating hidden compartments he made while still an interdiction officer. These videos show viewers how to “conceal their stash,” “avoid narcotics profiling” and “fool canines every time,” according to the website. Barry Cooper is a proponent for the legalization of marijuana and was a Libertarian candidate for U.S. Congress District 31 in Texas. Barry Cooper lives in Tyler, Texas and appears strongly motivated to prove his contention that marijuana should be decriminalized and enjoys the publicity generated by this ruse. He has stated an intention to operate again in Odessa, Texas and elsewhere. Barry Cooper and his associates at Kobusters.com have shown the technical ability to stage this type of action and the knowledge to hire “actors” to execute this type of ruse in order to further substantiate their false claims.

(U//LES) Should your agency have or collect intelligence regarding the captioned matter, please forward it to the El Paso Division FBI/Midland Resident Agency.