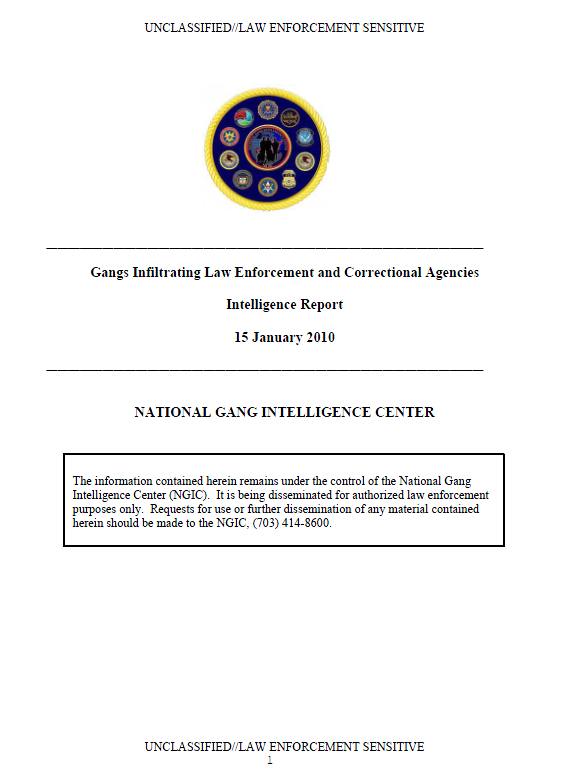 DETAILS:
(U//LES) White supremacist groups and OMGs have successfully infiltrated and have made
numerous attempts to infiltrate law enforcement, military, and government agencies and recruit
law enforcement personnel, according to FBI reporting and local law enforcement reporting.
Associates and family members OMGs, such as the Hells Angels and the Outlaws, have been
employed by police departments, government, courts, and correctional facilities.
• (U//LES) In 2009, a female jail guard who was an Aryan Brotherhood associate
employed at the Texas Department of Corrections aided incarcerated Aryan Brotherhood
members to communicate by passing messages, according to FBI reporting.

• (U) In July 2006, a former police officer with suspected ties to the Klu Klux Klan (KKK)
was charged with civil rights violations involving alleged death threats made against
black school children and a black city council member.
• (U) In June 2006, a state correctional officer at the California Institution for Men in
Chino, California was convicted on federal racketeering charges for helping the Nazi
Low Riders white supremacist gang distribute drugs and assault other inmates.
• (U) According to law enforcement and open source reporting, in February 2005 a former
Atlanta police officer admitted that he was a lieutenant in the Diablos Motorcycle Gang,
and that he assisted the gang with crimes such as robbery and drug trafficking during the
course of his employment as an officer. He pleaded guilty to assisting in the abduction of
a rival gang member who was severely beaten.
• (U//LES) In March 2001, the National Alliance white supremacist organization engaged
in heavy recruitment efforts targeting members of academic institutions, members of the
military, and law enforcement officers.
(U) Several street gang members have successfully infiltrated law enforcement and
government agencies. The Latin Kings have infiltrated and have made several attempts to
infiltrate law enforcement agencies in New Jersey, New York, and Florida.
• (U//LES) Several Latin King gang members and associates have served as police
officers in Union County, New Jersey, according to law enforcement reporting.
• (U) In 2008, a Latin King member in Connecticut advised FBI officials that his
family, all comprised of Latin King members – offered to pay for his education in
criminal justice, so that he could work in law enforcement and assist them.
• (U//LES) In approximately 2004, the Brevard County Sheriff’s Office in Florida
recovered job listings for several positions within correctional agencies and court
systems during a search of a Latin King member’s residence. Also recovered were
letters discussing a plan for gang members without criminal records or tattoos to
attain positions of government employment, police, courts, and correctional
agencies.
• (U//LES) In 2000, a Latin King gang leader served as a New York City school safety
officer, and several other Latin King gang members were reportedly employed by the
New York court system.
• (U//LES) In 2008 a US Customs and Border Patrol agent in Tucson, Arizona,
attended the funeral of his cousin, a gang member, to conduct his own investigation
into his cousin’s death. The agent was ultimately terminated from duty.