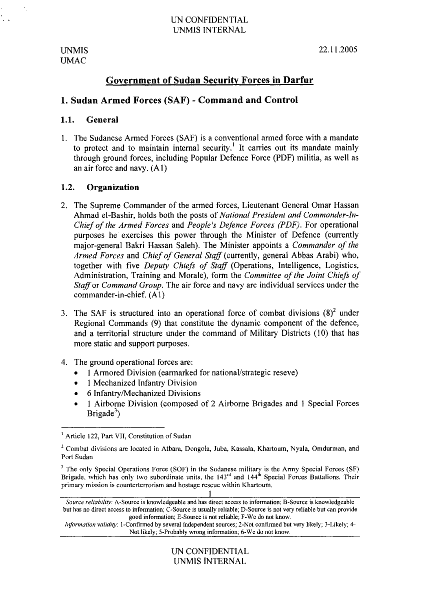 1. The Sudanese Armed Forces (SAF) is a conventional armed force with a mandate to protect and to maintain internal security. It carries out its mandate mainly through ground forces, including Popular Defence Force (PDF) militia, as well as an air force and navy. (A1)

2. The Supreme Commander of the armed forces, Lieutenant General Omar Hassan Ahmad el-Bashir, holds both the posts of National President and Commander-In Chief of the Armed Forces and People’s Defence Forces (PDF). For operational purposes he exercises this power through the Minister of Defence (currently major-general Bakri Hassan Saleh). The Minister appoints a Commander of the Armed Forces and Chief of General Staff (currently, general Abbas Arabi) who, together with five Deputy Chiefs of Staff (Operations, Intelligence, Logistics, Administration, Training and Morale), form the Committee of the Joint Chiefs of Staff or Command Group. The air force and navy are individual services under the commander-in-chief. (A1)

9. The Military Intelligence (Istikhbarat al-Askariyya) is a branch of the General Staff with its own administration and command. The status of the MI is not completely clear, but it appears that under emergency laws, it has the power to arrest, detain and interrogate. With regard to communication and reporting, the MI branch passes information through the operational chain, as well as directly to the Presidency, through the Chief of the MI branch. (B2)

10. The Military Intelligence also include an operational unit called Border Intelligence (BI) (Istikhbarat al-Hudud), headquartered in Khartoum and headed by General AI-Hadi Hamid el-Tayeed (2005), the primary role of which is to monitor and gather information in the border area. Members of this unit are recruited from the local population. They are deployed to their areas of origin, according to their experience in the area, knowledge of the tribes, and ability to differentiate between people of different tribal and national origins based on local knowledge. Border Intelligence guards are under the operational control of the Military Intelligence Officers in the particular Division where they are deployed and otherwise fall under the regular chain of command for the armed forces. (C2)

11. While initially BI officers were recruited in relation to the conflict in southern Sudan, the Government began recruiting them during the early stages of the armed conflict in Darfur in late 2002 and early 2003. Apparently, BI soldiers are recruited directly into the army in the same way as regular soldiers. An advertisement is made through media channels for volunteers who meet certain criteria, in particular with regard to age, citizenship and fitness. Approximately 3,000 Border Intelligence soldiers have been recruited in this way and deployed in Darfur. (B3)

19. The National Security and Intelligence Service (NSIS) is not part of the Sudan Armed Forces but is part of the Ministry of Interior (currently headed by Zubeir Beshir Taha (NCP) in the Government of National Unity).

20. The NSIS was formed in February 2004 as a move to create one unified service dealing with both internal and external intelligence. Its main headquarter is in Khartoum and is headed by a Director-general who is appointed by the President. The current Director-General, Major-general Salah Abdallah (also known as Salah Gosh), reports at least every second day to the President and/or First VicePresident. While he co-operates with other organs of the Government, he is accountable directly to the President.

30. Although we do not consider Janjaweed as being part of the GoS apparatus in Darfur, we mention it in this report for clarification purposes.

31. The term “Janjaweed”, in particular, has been widely used by victims of attacks to describe their attackers (the words fursan (horsemen, knights), or mujahedeen). The term has consequently also been used by many international organizations and the media in their reports on the situation in Darfur, and was used by the Security Council in resolution 1564. Victims of attacks have indicated that the Janjaweed were acting with and on behalf of Government forces, but no evidence – at this stage – allows to confirm such allegation.

32. “Janjaweed” is a generic Darfurian term that can be translated as “bandits”. Historically, this word describes armed horsemen performing “razzias,,18 against farmers and villagers. In the recent years,  however, the word has been repeatedly used by the international community to describe combatants that cannot be clearly associated to a specific organization. In the world media, however, the word “Janjaweed” is irremediably – and often wrongly – associated to the GoS19 Cross examination of reports collected by UMAC shows that the word Janjaweed used by sources in Darfur may refer to :

• Spontaneous militias or self-defence forces (nomads or farmers) not always supported by the GoS; (AI)
• Spontaneous militias or self-defence units locally based supporting rebel movements; (AI)
• Popular Defence Forces (PDF) supported by the GoS as part of the armed forces. The PDF are locally based, organized, trained, and equipped units raised by the government to protect local communities. The PDF are defined by the Popular Defence Forces Act of 1989.; (A2)
• Covert units associated with “Border Intelligence” (and probably other government intelligence and security agencies) operating in Western Darfur against illegal activities across the border; (C2)
• Chadian Armed Opposition Groups (CAOG) operating across the Chadian Sudanese border and using Darfur as a sanctuary and as a “supply” area; (A 1)
• Criminals, former combatant living out of theft and cross-border trafficking. This category is expected to increase in number as GoS and rebel armies will demobilize. (AI)