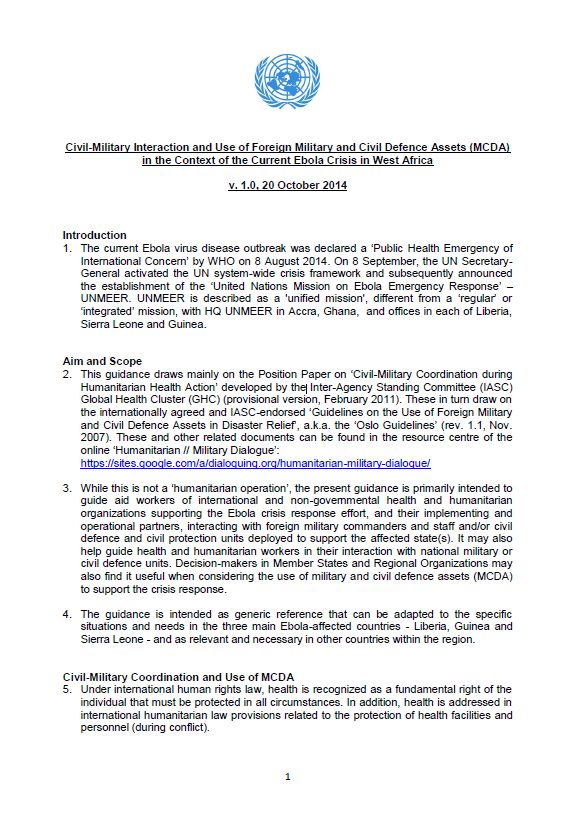 1. The current Ebola virus disease outbreak was declared a ‘Public Health Emergency of International Concern’ by WHO on 8 August 2014. On 8 September, the UN Secretary-General activated the UN system-wide crisis framework and subsequently announced the establishment of the ‘United Nations Mission on Ebola Emergency Response’ – UNMEER. UNMEER is described as a ‘unified mission’, different from a ‘regular’ or ‘integrated’ mission, with HQ UNMEER in Accra, Ghana, and offices in each of Liberia, Sierra Leone and Guinea.

2. This guidance draws mainly on the Position Paper on ‘Civil-Military Coordination during Humanitarian Health Action’ developed by the Inter-Agency Standing Committee (IASC) Global Health Cluster (GHC) (provisional version, February 2011). These in turn draw on the internationally agreed and IASC-endorsed ‘Guidelines on the Use of Foreign Military and Civil Defence Assets in Disaster Relief’, a.k.a. the ‘Oslo Guidelines’ (rev. 1.1, Nov. 2007). These and other related documents can be found in the resource centre of the online ‘Humanitarian // Military Dialogue’:
https://sites.google.com/a/dialoguing.org/humanitarian-military-dialogue/

3. While this is not a ‘humanitarian operation’, the present guidance is primarily intended to guide aid workers of international and non-governmental health and humanitarian organizations supporting the Ebola crisis response effort, and their implementing and operational partners, interacting with foreign military commanders and staff and/or civil defence and civil protection units deployed to support the affected state(s). It may also help guide health and humanitarian workers in their interaction with national military or civil defence units. Decision-makers in Member States and Regional Organizations may also find it useful when considering the use of military and civil defence assets (MCDA) to support the crisis response.

4. The guidance is intended as generic reference that can be adapted to the specific situations and needs in the three main Ebola-affected countries – Liberia, Guinea and Sierra Leone – and as relevant and necessary in other countries within the region.

Civil-Military Coordination and Use of MCDA

5. Under international human rights law, health is recognized as a fundamental right of the individual that must be protected in all circumstances. In addition, health is addressed in international humanitarian law provisions related to the protection of health facilities and personnel (during conflict).

6. In view of the uniqueness and magnitude of the current Ebola public health crisis and the overall international support and commitments to address the situation with all means possible, including Member States’ military and civil defence assets, it is understood that civil-military interaction is overall based on a cooperative relationship.

7. Dialogue and information sharing between military and health and humanitarian personnel is essential. It creates a common situational awareness to guide planning and decision-making, including on the use of available foreign military assets. Coordination should take place with all foreign military actors through relief activities and information shared through established coordination mechanisms, to avoid duplication.

8. Task division between military and health and humanitarian personnel is also an important factor. This includes identifying potential or actual capacity gaps and the critical window of delivery of goods and services.

9. Joint planning and task management, to the extent possible, will ensure maximum efficiency and avoid overlaps and gaps. Co-location in the established mechanisms, such as national Ebola Operation Centres, would optimise the use of assets. Any parallel mechanisms or structures should be avoided as far as possible.

10. In some specific settings as described in para 13 below, in order to preserve respect for humanitarian principles, these activities may be limited or non-applicable, unless they are immediately life-saving and/or directly related to a context of protection of civilians.

11. The current Ebola public health crisis is unique in that, so far, all requests to Member States for assets and services have included civilian, civil protection, as well as military and civil defence assets (MCDA), due to the scarcity of the specific medical assets and services required to address this specific crisis. It is recognized, therefore, that the basic principles for the appropriate use of foreign MCDA are in accordance with the Oslo Guidelines, notably:

12. Any consideration of use or deployment of MCDA and related consultations should be channelled through either the affected state(s) or UNMEER.

13. Due to the insecure operational environment in some countries in the region, the respective military forces present and involved in any Ebola response or preparedness activity could be a potential party to a conflict. In accordance with the ‘Guidelines on the Use of Military and Civil Defence Assets to Support United Nations Humanitarian Activities in Complex Emergencies’, a.k.a. the MCDA Guidelines (Rev. I Jan. 2006), should these or other foreign military resources be considered or deployed in active security-related functions or operations, the civil-military relationship has to be managed carefully and on a case by case basis to avoid association and maintain a clear distinction between military and health and humanitarian aid workers. The perception by local actors and populations of foreign military and peacekeeping troops is also a factor to be taken into account.

14. As a general rule, interaction with the military and the pursuing of common goals must not compromise the actual or perceived neutrality, impartiality and operational independence of health and humanitarian aid workers.

15. At the request of UNMEER, OCHA has identified a number of Civil-Military Coordination experts for employment within the Mission structure. The role of these experts is to facilitate the interaction between Mission personnel, health and humanitarian aid workers, and military actors involved in the current Ebola public health crisis. Their primary tasks are to:

16. Much of the support provided by foreign and UN military forces will be logistic in nature and WFP may also provide capability to ensure best use of military assets.
Possible Military Support

17. Key messages of the Global Health Cluster Position Paper relevant to this guidance are:

18. Military and civil defence / protection support could include both ‘indirect’ and ‘direct’ health assistance.
Examples of health specific indirect assistance are:

19. Examples of direct health assistance are:

Security of Health and Humanitarian Aid Workers and Health Facilities

20. Several cases have been reported of attacks against teams collecting bodies believed to be infected with Ebola or conducting community based information campaigns. While the overall operational environment is considered non-conflictual, national and/or foreign military or civil defence units may be called on to protect the civilian population and health facilities and prevent looting thereof, as well as create an environment where health and humanitarian personnel can deliver health and humanitarian assistance.

21. In exceptional cases as described in para 13 above, military escorts may be requested in high risk areas to facilitate access to affected areas and people and ensure security for health and humanitarian personnel and facilities. The updated IASC-endorsed Guidelines on the Use of Armed Escorts for Humanitarian Convoys (February 2013) refer in these extreme cases.
Contacts

22. Related queries and/or assistance can be addressed to OCHA’s Civil-Military Coordination Section at cmcs@un.org or to UNMEER at unmeerrecords@un.org