UN Human Rights Report: The Role of Encryption and Anonymity in Protecting Privacy and Freedom of Expression

The following report was released May 22, 2015 by the UN Office of the High Commissioner for Human Rights.  The report describes the importance of encryption and anonymity in facilitating essential human rights including the right to free expression and privacy. 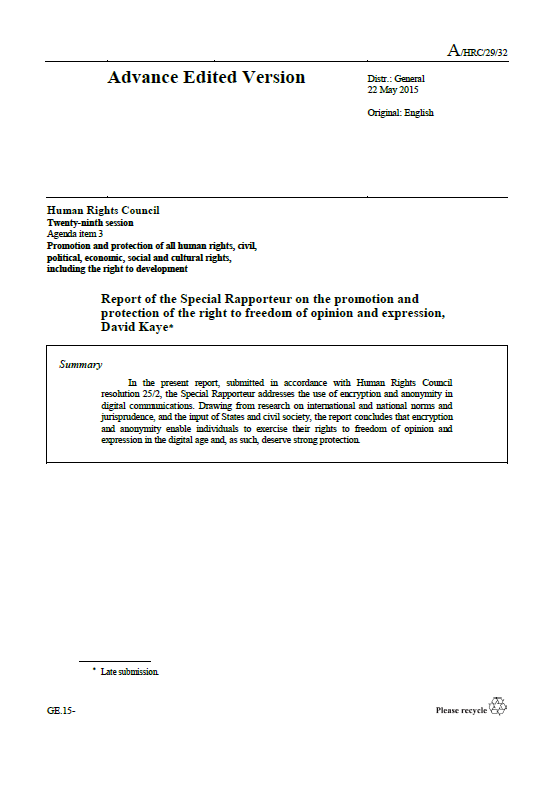 Report of the Special Rapporteur on the promotion and protection of the right to freedom of opinion and expression, David Kaye

In the present report, submitted in accordance with Human Rights Council resolution 25/2, the Special Rapporteur addresses the use of encryption and anonymity in digital communications. Drawing from research on international and national norms and jurisprudence, and the input of States and civil society, the report concludes that encryption and anonymity enable individuals to exercise their rights to freedom of opinion and expression in the digital age and, as such, deserve strong protection.

1. Contemporary digital technologies offer Governments, corporations, criminals and pranksters unprecedented capacity to interfere with the rights to freedom of opinion and expression. Online censorship, mass and targeted surveillance and data collection, digital attacks on civil society and repression resulting from online expression force individuals around the world to seek security to hold opinions without interference and seek, receive and impart information and ideas of all kinds. Many seek to protect their security through encryption, the scrambling of data so only intended recipients may access it, which may be applied to data in transit (e.g., e-mail, messaging, Internet telephony) and at rest (e.g., hard drives, cloud services). Others seek additional protection in anonymity, using sophisticated technologies to disguise their identity and digital footprint. Encryption and anonymity, today’s leading vehicles for online security, provide individuals with a means to protect their privacy, empowering them to browse, read, develop and share opinions and information without interference and enabling journalists, civil society organizations, members of ethnic or religious groups, those persecuted because of their sexual orientation or gender identity, activists, scholars, artists and others to exercise the rights to freedom of opinion and expression.

2. Yet, just as the telephone may be used both to report a crime to the police and to conspire to commit one, so too may the Internet be abused to interfere with the rights of others, national security or public order. Law enforcement and intelligence services often assert that anonymous or encrypted communications make it difficult to investigate financial crimes, illicit drugs, child pornography and terrorism. Individuals express legitimate concerns about how bullies and criminals use new technologies to facilitate harassment. Some States restrict or prohibit encryption and anonymity on these and other grounds, while others are proposing or implementing means for law enforcement to circumvent these protections and access individual communications.

3. In the light of these challenges, the present report examines two linked questions. First, do the rights to privacy and freedom of opinion and expression protect secure online communication, specifically by encryption or anonymity? And, second, assuming an affirmative answer, to what extent may Governments, in accordance with human rights law, impose restrictions on encryption and anonymity? The present report seeks to answer these questions, review examples of State practice and propose recommendations. It does not purport to address every technical or legal question raised by digital technologies, but it identifies important ones for future reporting.

A. Contemporary encryption and anonymity

6. Modern approaches to private and secure communication draw on ideas that have been with humankind for millenniums. The rise of electronic data storage, the Internet and mass data collection and retention made clear that sophisticated means would be needed to protect individual, corporate and government data. As e-mail, instant-messaging, Voice-over-Internet Protocols, videoconferencing and social media moved from niche services to predominant and easily monitored modes of communication, individuals developed a need for security online, so that they could seek, receive and impart information without the risk of repercussions, disclosure, surveillance or other improper use of their opinions and expression.

7. Encryption — a mathematical “process of converting messages, information, or data into a form unreadable by anyone except the intended recipient” — protects the confidentiality and integrity of content against third-party access or manipulation. Strong encryption, once the sole province of militaries and intelligence services, is now publicly accessible and often freely available to secure e-mail, voice communication, images, hard drives and website browsers. With “public key encryption”, the dominant form of end-to-end security for data in transit, the sender uses the recipient’s public key to encrypt the message and its attachments, and the recipient uses her or his own private key to decrypt them. Encryption may also be used to create digital signatures to ensure that a document and its sender are authentic, to authenticate and verify the identity of a server and to protect the integrity of communications between clients against tampering or manipulation of traffic by third parties (e.g., “man-in-the-middle” attacks). Since the encryption of data in transit does not ensure against attacks on unencrypted data when it is sitting at rest at either endpoint (nor protect the security of one’s private key), one may also encrypt data at rest stored on laptops, hard drives, servers, tablets, mobile phones and other devices. Online practices may also be moving away from the system described here and towards “forward secrecy” or “off-the-record” technology in which keys are held ephemerally, particularly for uses such as instant messaging.

8. Some call for efforts to weaken or compromise encryption standards such that only Governments may enjoy access to encrypted communications. However, compromised encryption cannot be kept secret from those with the skill to find and exploit the weak points, whether State or non-State, legitimate or criminal. It is a seemingly universal position among technologists that there is no special access that can be made available only to government authorities, even ones that, in principle, have the public interest in mind. In the contemporary technological environment, intentionally compromising encryption, even for arguably legitimate purposes, weakens everyone’s security online.

9. Notably, encryption protects the content of communications but not identifying factors such as the Internet Protocol (IP) address, known as metadata. Third parties may gather significant information concerning an individual’s identity through metadata analysis if the user does not employ anonymity tools. Anonymity is the condition of avoiding identification. A common human desire to protect one’s identity from the crowd, anonymity may liberate a user to explore and impart ideas and opinions more than she would using her actual identity. Individuals online may adopt pseudonyms (or, for instance, fake e-mail or social media accounts) to hide their identities, image, voice, location and so forth, but the privacy afforded through such pseudonyms is superficial and easily disturbed by Governments or others with the necessary expertise; in the absence of combinations of encryption and anonymizing tools, the digital traces that users leave behind render their identities easily discoverable. Users seeking to ensure full anonymity or mask their identity (such as hiding the original IP address) against State or criminal intrusion may use tools such as virtual private networks (VPNs), proxy services, anonymizing networks and software, and peer-to-peer networks.3 One well-known anonymity tool, the Tor network, deploys more than 6,000 decentralized computer servers around the world to receive and relay data multiple times so as to hide identifying information about the end points, creating strong anonymity for its users.

10. A key feature of the digital age is that technology changes incessantly to sate user demands. Although the present report refers to contemporary technologies that facilitate encryption and anonymity, its analysis and conclusions apply generally to the concepts behind the current technologies and should be applicable as new technologies replace the old.

III. Encryption, anonymity and the rights to freedom of opinion and expression and privacy

14. The human rights legal framework for encryption and anonymity requires, first, evaluating the scope of the rights at issue and their application to encryption and anonymity; and, second, assessing whether, and if so to what extent, restrictions may lawfully be placed on the use of technologies that promote and protect the rights to privacy and freedom of opinion and expression.

15. The rights to privacy and freedom of opinion and expression have been codified in universal and regional human rights instruments, interpreted by treaty bodies and regional courts, and evaluated by special procedures of the Human Rights Council and during universal periodic review. The universal standards for privacy, opinion and expression are found in the International Covenant on Civil and Political Rights, to which 168 States are party. Even for those remaining States that are not bound by it, the Covenant presents at the very least a standard for achievement and often reflects a customary legal norm; those that have signed but not ratified the Covenant are bound to respect its object and purpose under article 18 of the Vienna Convention on the Law of Treaties. National legal systems also protect privacy, opinion and expression, sometimes with constitutional or basic law or interpretations thereof. Several global civil society projects have also provided compelling demonstrations of the law that should apply in the context of the digital age, such as the International Principles on the Application of Human Rights to Communications Surveillance and the Global Principles on National Security and the Right to Information. Although specific standards may vary from right to right, or instrument to instrument, a common thread in the law is that, because the rights to privacy and to freedom of expression are so foundational to human dignity and democratic governance, limitations must be narrowly drawn, established by law and applied strictly and only in exceptional circumstances. In a digital age, protecting such rights demands exceptional vigilance.

A. Privacy as a gateway for freedom of opinion and expression

16. Encryption and anonymity provide individuals and groups with a zone of privacy online to hold opinions and exercise freedom of expression without arbitrary and unlawful interference or attacks. The previous mandate holder noted that the rights to “privacy and freedom of expression are interlinked” and found that encryption and anonymity are protected because of the critical role they can play in securing those rights (A/HRC/23/40 and Corr.1). Echoing article 12 of the Universal Declaration of Human Rights, article 17 of the International Covenant on Civil and Political Rights specifically protects the individual against “arbitrary or unlawful interference with his or her privacy, family, home or correspondence” and “unlawful attacks on his or her honour and reputation”, and provides that “everyone has the right to the protection of the law against such interference or attacks”. The General Assembly, the United Nations High Commissioner for Human Rights and special procedure mandate holders have recognized that privacy is a gateway to the enjoyment of other rights, particularly the freedom of opinion and expression (see General Assembly resolution 68/167, A/HRC/13/37 and Human Rights Council resolution 20/8).

17. Encryption and anonymity are especially useful for the development and sharing of opinions, which often occur through online correspondence such as e-mail, text messaging, and other online interactions. Encryption provides security so that individuals are able “to verify that their communications are received only by their intended recipients, without interference or alteration, and that the communications they receive are equally free from intrusion” (see A/HRC/23/40 and Corr.1, para. 23). Given the power of metadata analysis to specify “an individual’s behaviour, social relationships, private preferences and identity” (see A/HRC/27/37, para. 19), anonymity may play a critical role in securing correspondence. Besides correspondence, international and regional mechanisms have interpreted privacy to involve a range of other circumstances as well.