The following report was released by the United Nations Support Mission in Libya (UNSMIL) on October 1, 2013. 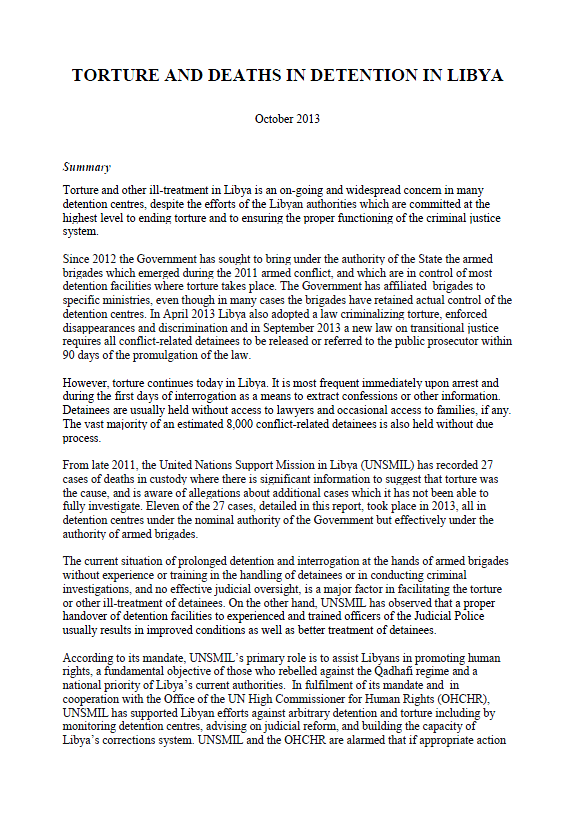 TORTURE AND DEATHS IN DETENTION IN LIBYA

Torture and other ill-treatment in Libya is an on-going and widespread concern in many detention centres, despite the efforts of the Libyan authorities which are committed at the highest level to ending torture and to ensuring the proper functioning of the criminal justice system.

Since 2012 the Government has sought to bring under the authority of the State the armed brigades which emerged during the 2011 armed conflict, and which are in control of most detention facilities where torture takes place. The Government has affiliated brigades to specific ministries, even though in many cases the brigades have retained actual control of the detention centres. In April 2013 Libya also adopted a law criminalizing torture, enforced disappearances and discrimination and in September 2013 a new law on transitional justice  requires all conflict-related detainees to be released or referred to the public prosecutor within 90 days of the promulgation of the law.

However, torture continues today in Libya. It is most frequent immediately upon arrest and during the first days of interrogation as a means to extract confessions or other information. Detainees are usually held without access to lawyers and occasional access to families, if any. The vast majority of an estimated 8,000 conflict-related detainees is also held without due process.

From late 2011, the United Nations Support Mission in Libya (UNSMIL) has recorded 27  cases of deaths in custody where there is significant information to suggest that torture was the cause, and is aware of allegations about additional cases which it has not been able to fully investigate. Eleven of the 27 cases, detailed in this report, took place in 2013, all in detention centres under the nominal authority of the Government but effectively under the authority of armed brigades.

The current situation of prolonged detention and interrogation at the hands of armed brigades without experience or training in the handling of detainees or in conducting criminal investigations, and no effective judicial oversight, is a major factor in facilitating the torture or other ill-treatment of detainees. On the other hand, UNSMIL has observed that a proper handover of detention facilities to experienced and trained officers of the Judicial Police usually results in improved conditions as well as better treatment of detainees.

According to its mandate, UNSMIL’s primary role is to assist Libyans in promoting human rights, a fundamental objective of those who rebelled against the Qadhafi regime and a national priority of Libya’s current authorities. In fulfilment of its mandate and in cooperation with the Office of the UN High Commissioner for Human Rights (OHCHR), UNSMIL has supported Libyan efforts against arbitrary detention and torture including by monitoring detention centres, advising on judicial reform, and building the capacity of Libya’s corrections system. UNSMIL and the OHCHR are alarmed that if appropriate action is not taken, there is a danger that torture will become institutionalized within the new Libya, rather than making a clean break with the human rights violations of the past when arbitrary detention and torture were systematic.

UNSMIL and the OHCHR recommend that the Libyan authorities and the armed brigades accelerate the process of handing over detainees to the effective control of State authorities, and in the meantime take measures to protect detainees against torture or other ill-treatment. The Libyan authorities should adopt a strategy to screen and where appropriate release or charge and prosecute conflict-related detainees. They should also build the capacity of the criminal justice system to safeguard detainees against any form of abuse and end impunity for on-going violations.

Torture and other ill-treatment

The deaths in custody included in this report form part of a much broader pattern of torture and other ill-treatment of detainees. The number and nature of the cases documented, as well as the continuing allegations of serious mistreatment, indicate that such abuse of detainees in Libya is an on-going and widespread concern in many detention centres, and that this problem does not necessarily end when Libyan State authorities nominally take over detention facilities but armed brigades remain in effective control.

On the other hand, UNSMIL has observed that a proper handover of detention facilities to experienced and trained officers of the Judicial Police usually results in improved conditions as well as better treatment of detainees. For instance, the treatment of detainees in al-Wahda and al-Huda Correction and Rehabilitation Institutions in Misrata, and Majer Correction and Rehabilitation Institution in Zliten, which UNSMIL visited several times during the last two years, significantly improved when the Judicial and Military Police took over.

According to the information available to UNSMIL, torture is most frequent immediately upon arrest and during the first days of interrogation as a means to extract confessions or other information. Detainees are usually held without access to lawyers, and families may not know the whereabouts of their relatives for days, weeks, or even months. In some cases reported to UNSMIL, the whereabouts of individuals remain unknown.

Those arrested are taken from their homes, workplaces, streets or checkpoints. Detainees are frequently moved from one makeshift place of detention (some may even be officially recognized as being under a specific ministry) to another before being transferred for longer periods to proper prisons. They include individuals suspected of having fought on the side of or otherwise having supported Qadhafi’s regime, and their family members. Some have been detained apparently on the basis of belonging to certain tribal or ethnic groups, including Warfalla, Tawergha, and Mashashia, as these groups are collectively perceived by some as having supported the former regime. Given the arbitrary nature of the arrests and lack of judicial oversight, cases of personal score-settling are not uncommon.

Detainees told UNSMIL that they were constrained in contorted positions; beaten on the soles of their feet (falaqa); beaten all over the body with whips, cables, plastic hoses, metal chains, bars and wooden sticks; and given electric shocks with live wires or taser-like weapons. Several said they were hanged upside down and beaten for hours, burned with cigarettes, had hot liquids poured on them, and were exposed to burning metals.

For example, a man in his late twenties was detained for five months in a detention facility under the authority of an armed brigade under the authority of the Ministry of Defence. He told UNMSIL that he was asked to confess that he had been involved in the fighting during the conflict, killing anti-Qadhafi fighters and looting homes. He said that during his detention he was beaten with an array of implements including whips and wooden sticks, and given electric shocks with live wires while water was poured on him. He was deprived of sleep and given little food and water. He was not able to walk and, according to a medical certificate, he had suffered “muscle laceration as well psychological trauma.”

Other detainees reported rape by having sticks or bottles inserted into their anuses, or said they were beaten on their genitals. In one case, a man in his late forties held by an armed brigade under the authority of the SSC told UNSMIL that he was kept in solitary confinement for four months and beaten with a metal bar, chains and water hoses. He said he suffered four broken fingers and a broken leg. He also said that he was forced to sit on a glass bottle several times and had a large bullet forcibly introduced into his anus, causing bleeding for several days. He added that other cell mates had similar symptoms when they came back from solitary confinement, but they never talked about it because they found it shameful. A man in his late thirties told UNSMIL that he was arrested while walking back home from work. According to his account, he was taken by armed people believed to belong to the SSC. He said he was blindfolded and taken to an unknown location where he was held for three days in a toilet. He told UNSMIL that it was dark and he could not see anything, and was forced to sleep on urine and faeces. He said he was left without water and food for three days and had to drink his my own urine to survive. The man told UNSMIL that he was moved several times to different makeshift detention facilities. He said that when he was taken for interrogation he was beaten with wooden sticks and kicked at least for two hours while blindfolded and handcuffed, and hanged upside down and beaten with sticks and metal chains. He said he was asked repeatedly to confess to crimes.

A 20 year-old man told UNSMIL that he spent about 20 days in solitary confinement in the custody of an armed brigade. He said he was kept without clothes, forced to sleep on the floor without mattress or a blanket, and given little food and water. He said he was electrocuted, burnt with cigarettes and beaten with sticks and hoses including on his genitals. UNSMIL saw marks of burns as well as scars all over his body.

Among those visited by UNSMIL were detainees with not just broken limbs but also disabilities, such as deafness and blindness apparently caused by their treatment. Some detainees who said they had been recently beaten could barely walk. Several detainees developed chronic diseases apparently because of lack of adequate nutrition, ventilation and sunlight; exposure to humidity; and poor detention conditions in general. Others suffered from poor medical care, and several died in custody apparently as a result of lack of adequate medical treatment.