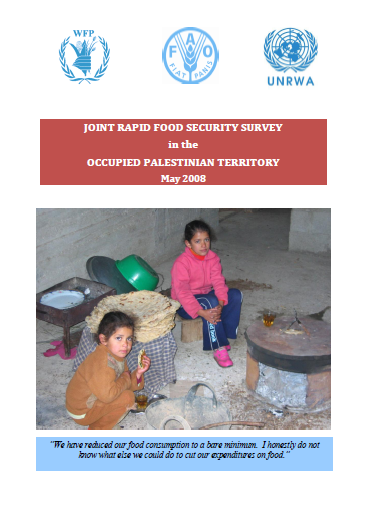 The main driver of Palestinian food insecurity is of a political nature, as key elements of vulnerability are rooted in the military and administrative measures imposed by the Israeli occupation – closure regime, permits, destruction of assets – as well as settlement expansion and derived infrastructure multiplication – access to land and water, bypass roads, etc. Soaring food prices, falling incomes and growing unemployment are jeopardizing the livelihoods of Palestinians, leading to heavy debt and changes in family eating habits. Previously self-reliant families are progressively falling into the poverty trap and are unable to escape from their situation in the absence of job opportunities. Furthermore those with work are facing increasing difficulties to manage due to unadjusted salaries, a degrading economic environment and high dependency ratios.

There is evidence of the positive effects of aid in mitigating the increase of Palestinians’ food insecurity. However food security remains poor and there are real imminent threats to the livelihoods and nutrition of a growing proportion of the population. The rapidly increasing prices of food and the declining productivity of the agricultural sector in both the West Bank (WB) and the Gaza Strip (GS) as a result of natural calamities and Israeli measures, together with the tightening of restrictions on the free movement of people and goods in the West Bank and Gaza Strip (WBGS); the unprecedented and prolonged closure of the GS; and, the inability of humanitarian organizations to meet the increasing demand for and cost of humanitarian assistance have, combined, been leading to the erosion of the livelihoods of the Palestinian population.

There is little scope for action other than that of a humanitarian-emergency nature to solve food insecurity, until the political dimension is resolved. In this framework and in concert with the Palestinian Reform and Development Plan (PRDP), social safety nets activities need immediate support along with the relevant public institutions and implementing agencies.