This document was first released by the New York Times. 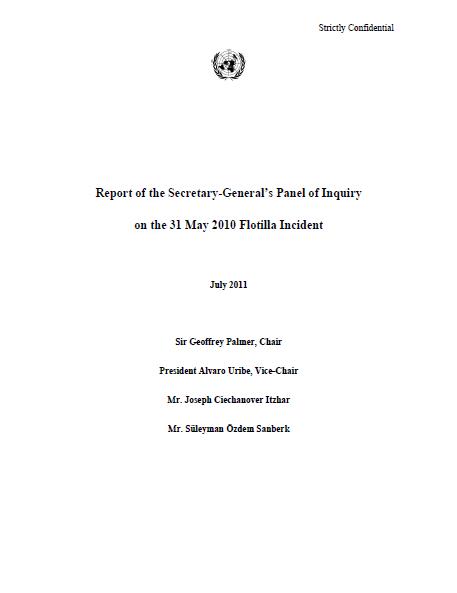 The Secretary-General established the Panel of Inquiry on the 31 May 2010 Flotilla Incident on 2 August 2010. The Panel received and reviewed reports of the detailed national investigations conducted by both Turkey and Israel. Turkey established a National Commission of Inquiry to examine the facts of the incident and its legal consequences, which provided an interim and final report to the Panel along with annexes and related material. Israel provided the report of the independent Public Commission that it had established to review whether the actions taken by the State of Israel had been compatible with international law.

The Panel reviewed these reports and further information and clarifications it received in written form and through direct meetings with Points of Contact appointed by each government. In light of the information so gathered, the Panel has examined and identified the facts, circumstances and context of the incident and considered and recommended ways of avoiding similar incidents in the future. In so doing it was not acting as a Court and was not asked to adjudicate on legal liability. Its findings and recommendations are therefore not intended to attribute any legal responsibilities. Nevertheless, the Panel hopes that its report may resolve the issues surrounding the incident and bring the matter to an end.