The following report was released by the United Nations Assistance Mission in Afghanistan on February 8, 2014. 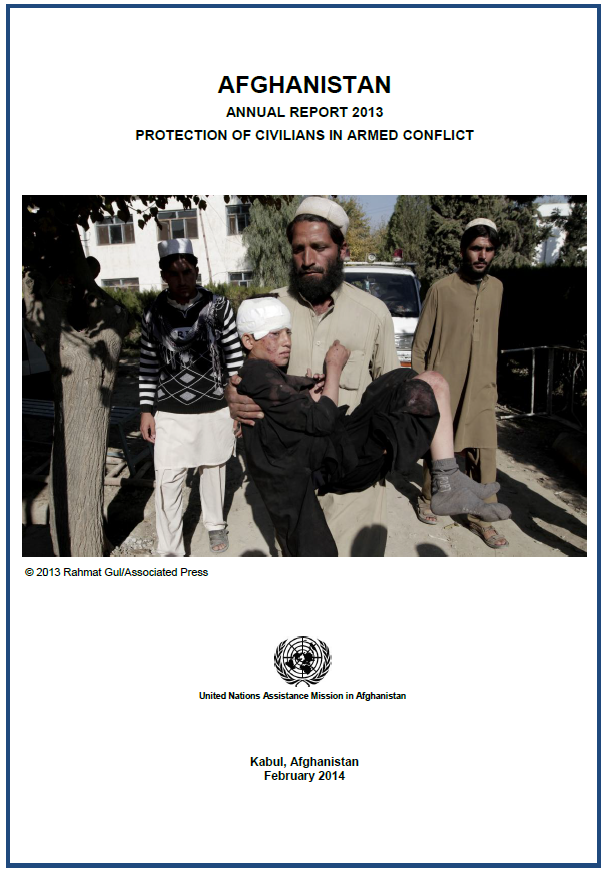 Escalating deaths and injuries to civilians in 2013 reverses the decline recorded in 2012 and is consistent with record high numbers of civilian casualties documented in 2011. Since 2009, the armed conflict in Afghanistan has claimed the lives of 14,064 Afghan civilians.

Mirroring the trends reported in UNAMA’s 2013 Mid-year Report on Protection of Civilians in the Armed Conflict, improvised explosive devices (IEDs) used by Anti-Government Elements particularly in areas populated or frequented by civilians was the main factor that drove the escalation in civilian casualties across Afghanistan in 2013.

UNAMA observed that 2013 was the worst year for Afghan women, girls and boys since 2009 with the highest recorded number of women and children’s deaths and injuries. Conflict-related violence caused 746 women casualties (235 women killed and 511 injured), up 36 percent from 2012. Child casualties increased by 34 percent compared to 2013 to 1,756 with 561 children killed and 1,195 injured.

UNAMA again calls on all parties to the conflict to uphold their obligations under international humanitarian law to take all necessary measures to protect civilians from the harms of conflict. 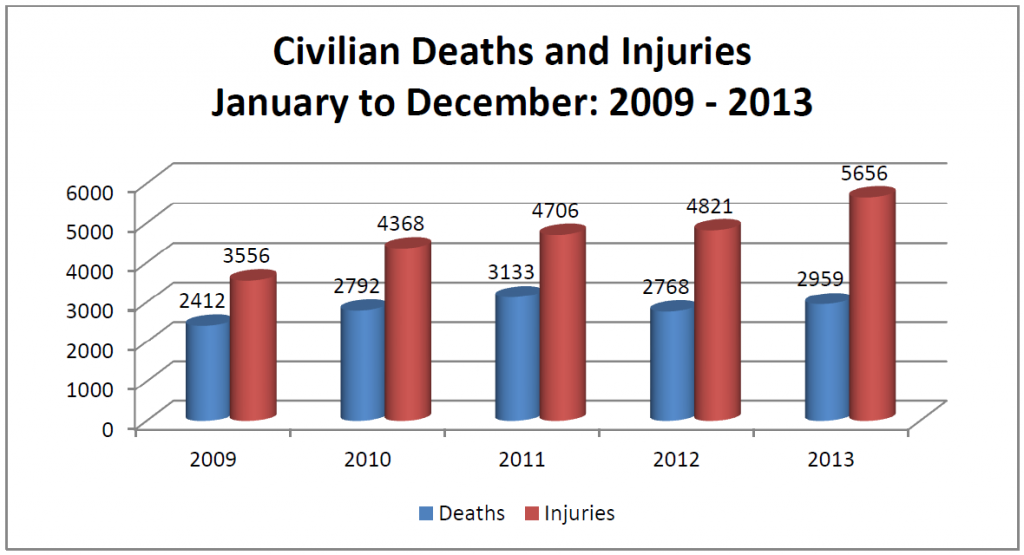 Anti-Government Elements and the Protection of Civilians

Civilian casualties from pressure-plate or victim-activated IEDs (PP-IEDs) declined by 39 percent from 2012 causing 557 civilian casualties (245 civilian deaths and 312 injured). While the decrease is noted, the human cost of PP-IED attacks in 2013 remained high. PP-IEDs were detonated in public areas used by civilians such as roads, markets, Government offices, bazaars, in and around schools, and bus stations. UNAMA reiterates that PP-IEDs as victim-activated devices – which are triggered by any person including children stepping on them or any vehicle driving over them such as civilian minibuses – are indiscriminate reinforcing its call on Anti-Government Elements to stop using them.

Threats and targeted attacks by Anti-Government Elements against mullahs (religious leaders) they accused of supporting the Government rose as attacks against mullahs and mosques tripled in 2013.
UNAMA documented 25 incidents of attacks against election workers and election facilities by Anti-Government Elements during 2013, resulting in 16 civilian casualties (four civilian deaths and 12 injured).

Throughout 2013, UNAMA noted increased public messaging by the Taliban on civilian casualties. However, the situation on the ground for Afghan civilians did not improve. The Taliban increased their indiscriminate use of IEDs and continued to attack civilians.

In 2013, the Taliban claimed responsibility for 153 attacks affecting civilians, an increase of 292 percent in such claims by the Taliban compared to 2012. UNAMA’s verification found these 153 attacks resulted in 944 civilian casualties (302 civilians killed and 642 injured), reflecting a 136 percent increase in civilian casualties for which the Taliban claimed responsibility compared with 2012. Most of these attacks in 2013 used indiscriminate tactics such as IED detonations in public areas or directly targeted civilians or civilian objects, particularly civilian administration personnel and buildings.

UNAMA highlights that indiscriminate attacks and deliberate targeted attacks against civilians are strictly prohibited under international humanitarian law which binds all parties to the conflict in Afghanistan including the Taliban. Attacks on civilians and killings of mullahs, elections workers, tribal elders and other civilians not directly participating in hostilities may amount to war crimes.

The Taliban began publishing monthly statements detailing incidents of civilian casualties they alleged were caused by Pro-Government Forces. Of the 277 incidents listed by the Taliban, 91 had been documented by UNAMA, 83 were followed up by UNAMA and 103 could not be verified as involving civilian casualties from conflict-related violence.

On 17 June, the Taliban announced the establishment of a “special committee under the supervision of the military commission for the avoidance of civilian losses.” The statement noted the committee was tasked with collecting information, investigating and referring incidents of ‘negligence’ by Taliban members to a sharia court. No public information has been provided to date on any action taken by this committee.

UNAMA highlights that for such a mechanism to be credible, it must use the definition of “civilian” under international humanitarian law and promote compliance with principles and norms of international and national law.

Civilian Casualties from Ground Engagements between Parties to the Conflict

Ground engagements were the second leading cause of civilian casualties countrywide producing 27 percent of all civilian deaths and injuries, and accounted for the majority – 39 percent – of all women and children casualties in 2013.

Thirty-eight (38) percent of civilian casualties from ground engagements between Anti-Government Elements and Pro-Government Forces – 877 civilian casualties (159 civilian deaths and 718 injured) – could not be directly attributed to either party, an increase of 76 percent compared to 2012. This ‘fog of war’ dynamic reflects the changed nature of the conflict in Afghanistan in 2013 which was increasingly being waged in civilian communities and populated areas with civilians caught in the cross fire.