The following report was released by the United Nations Assistance Mission in Afghanistan on February 18, 2015. 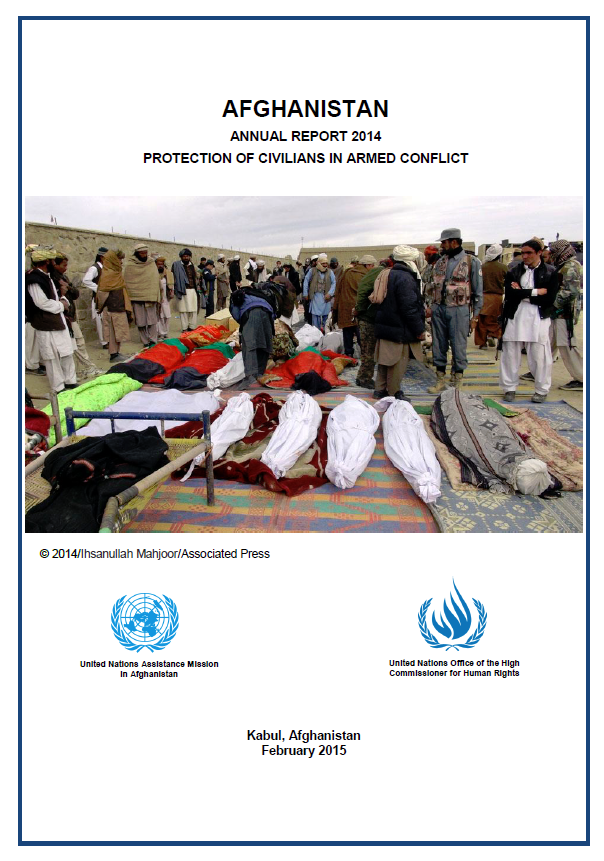 The 22 per cent rise in civilian casualties in 2014 resulted mainly from increased ground engagements across Afghanistan in which parties to the conflict also increasingly used high explosive weapons systems, such as mortars, rockets and grenades in civilian-populated areas – with devastating consequences for civilians. In 2014, civilian deaths and injuries from ground engagements increased by 54 per cent compared to 2013 making them the leading cause of civilian casualties and the biggest killers of women and children in 2014.

In 2014, UNAMA recorded the highest number of women‟s deaths and injuries from conflict-related violence since 2009, when UNAMA began systematically documenting civilian casualties. Five hundred and fifty-six (556) incidents were recorded which caused 909 women casualties (298 deaths and 611 injured), a 21 per cent increase from 2013.

To highlight the broader social and economic impact of the conflict on the lives of Afghan women, UNAMA interviewed 60 women from all regions in Afghanistan whose husbands, all civilians, were killed or seriously injured in conflict-related violence in 2014. UNAMA found that women who were left as sole income-providers for their households after the death or injury of their husbands experienced long-lasting social and economic consequences, with poverty forcing many women to give their daughters in marriage in exchange for debts or to take their children out of school often to work. Widowed women were often particularly vulnerable to other forms of violence and abuse from family and community members. These findings call for urgent action by the Government of Afghanistan to address the basic needs of this group of very vulnerable and often marginalized women and children.

UNAMA continued to document a number of incidents of sexual violence against children by parties to the conflict. UNAMA observed a continuing climate of impunity for such crimes due to a lack of due diligence on the part of authorities to investigate, prosecute and punish offenders. While acknowledging significant under-reporting, UNAMA verified five incidents of conflict-related sexual violence against children, four perpetrated by ALP members and one by members of a Pro-Government armed group.

Ground Engagements Leading Cause of Civilian Casualties in 2014

As the withdrawal of international military forces and combat air support continued in 2014, UNAMA observed more frequent and larger ground operations by both Afghan national security forces and Anti-Government Elements notably in Helmand, Kunar and Faryab provinces with fighting often occurring near district centres. The increased ground fighting in civilian–populated areas with all parties using mortars, other explosive weapons and small arms fire often led to harmful consequences for civilians.

UNAMA documented 3,605 civilian casualties (1,092 killed and 2,513 injured) from ground engagements, a 54 per cent increase from 2013, accounting for 34 per cent of all civilian casualties in 2014. These civilian deaths and injuries were caused when civilians were caught in crossfire between insurgents and Afghan security forces fighting in and around civilian-populated areas. 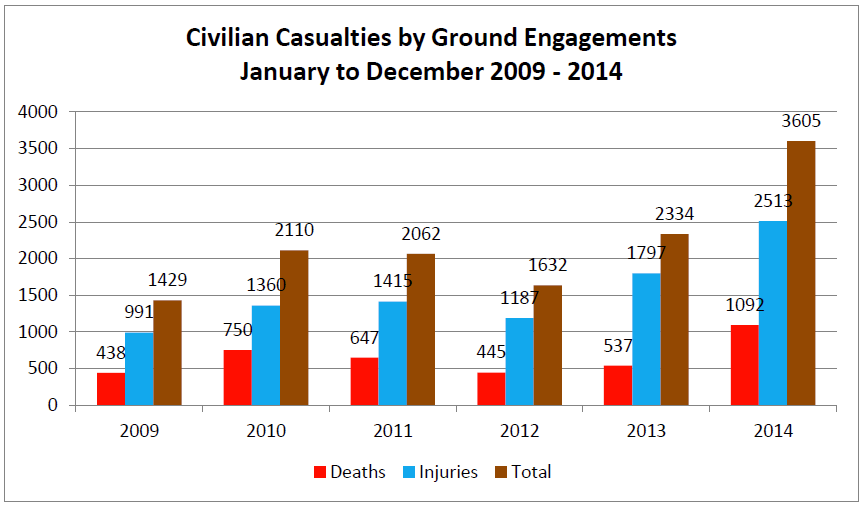 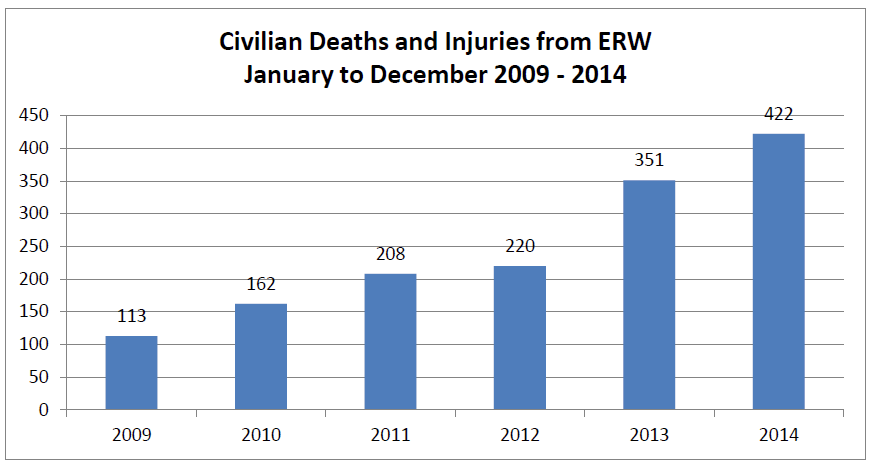