Defense Science Board Report: Unconventional Operational Concepts and the Homeland 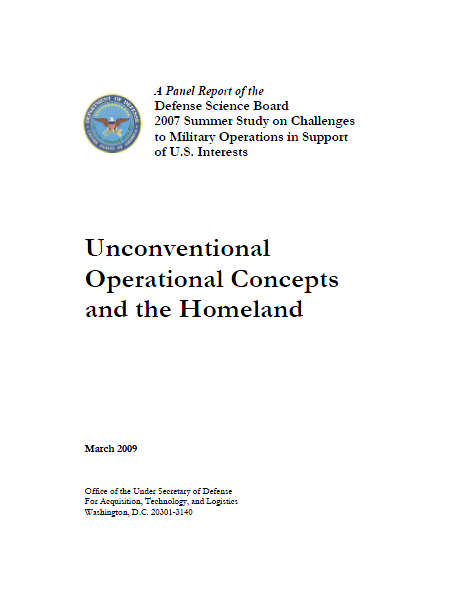 Unconventional Operational Concepts and the Homeland

This report on unconventional operational concepts and the homeland was prepared as part of the Defense Science Board 2007 Summer Study on Challenges to Military Operations in Support of National Interests. The summer study recognized that asymmetric tools of war in the hands of potential adversaries may well be employed using non-traditional concepts of operation. Moreover, the battlefield may no longer be limited to regions afar, but may include the U.S. homeland. The United States could well confront the possibility of going to war abroad in the face of significant devastation in the homeland—dividing forces between homeland catastrophe relief operations and combat abroad, or even facing the possibility that deploy and supply of U.S. military forces could be delayed and disrupted.

The capable adversary of the future will execute “one game”— attacking U.S. interests wherever the nation is most vulnerable, and that could mean the homeland. When a determined adversary succeeds in attacking the homeland at the scale imagined in this study, the nation will call on the Department of Defense (DOD) to “provide for the common defense” through both defense at home and offense abroad. DOD has, in fact, acknowledged such a future in its 2005 Strategy for Homeland Defense, which states unequivocally that DOD must be prepared to defend the homeland:

The Department of Defense must change its conceptual approach to homeland defense. The Department can no longer think in terms of the “home” game and the “away” game. There is only one game. … Defending the US homeland—our people, property, and freedom—is our most fundamental duty. Failure is not an option.

War on the Domestic Front

The United States has long postured itself for wars to be won by assertion of its national strength—large force size and/or technological advantage. But current conflicts and the rise of asymmetric strategies and tactics are making clear the weakness of this assumption. Future adversaries, either by choice or necessity, will not follow the path leading to a conflict of strength against strength.

The refusal to adopt a symmetric approach to war also goes beyond the basic issues of military strength and operational doctrine. The nations and non-state actors of the world are observing, through the current era of terrorism, that the most lucrative potential approach to war with the United States could well be through operations outside the nation’s moral framework and anticipated behavioral norms. They have been able to observe the effectiveness of this approach when the conditions involve a disparity of interest. Therefore, when an adversary has a vital interest that conflicts with the non-vital interest of a strong state, the former has the greatest incentive to use asymmetric approaches.

Many scenarios come to mind where U.S. adversaries view an issue as threatening life and/or state, while the United States has relatively little at stake. Under those circumstances, adversaries will often attempt to influence U.S. foreign-based activities. Simply put, they could execute innovative asymmetric approaches to shape U.S. national will in order to:

Moreover, U.S. military leadership has had difficulty embracing the concept of a two-front war, with one of the fronts being the homeland battlefield. Since the end of the Indian Wars in 1891, the United States has treated warfare as an “away game.” Attacks on the U.S. homeland (except by symmetric capabilities of ballistic missiles and long-range bombers) have been unthinkable due to the geographical isolation of the Americas and the strength of U.S. naval and air forces. The rise of global travel, commerce, and information flows has radically changed traditional American isolation. America’s sea and air power still make conventional mass invasion unlikely, but as military modes shift from concentrated industrial warfare to distributed wars among populations, domestic disruption is likely. Effects-based targeting, used with great success by U.S. forces to inflict maximum impact with minimum force, is similarly useful to aggressors seeking to distract the U.S. population; disrupt infrastructure, commerce, and government; and delay support to U.S. military forces operating abroad.

The homeland could be subjected to a wide range of attacks. In addition to the possibility of a serial or parallel accumulation of clearly feasible attack modes (improvised explosive devices [IEDs] and vehicle-borne IEDs, suicide bombers, and sniper attacks, for example), the attacks could employ nuclear explosives (including those designed to cause electromagnetic pulse effects), toxic chemicals, biological agents, radiological materials, and cyber means. The attacks could be from terrorists or disguised as such. They could move from isolated events to “war” campaigns. There is a distinct possibility of large loss of life and significant economic hardship. Destruction and degradation of national or local infrastructure is also possible. Military consequences of such actions on the U.S. logistics base can be severe. Civilian consequences of such actions can only be imagined but would be of major importance. While such attacks will be (initially) a Department of Homeland Security concern, they drastically affect DOD’s ability to defend the homeland and carry out military missions abroad.

In light of these potential consequences, the United States should expect future asymmetric attacks to focus on manipulating its populace—by attacking either critical infrastructure targets or the populace directly. The attacks would generally be tactical, but with strategic effect. If the population internalizes the terror associated with future attacks and begins to believe they are at risk in the normal course of their daily lives, then the will of the nation could be shaped. Additionally, if the threat involves weapons of mass destruction (WMD), the resulting image of massive casualties would elevate the effect to even higher levels of fear. If terror is reinforced by successive events, the American people could come to believe that they have no control. Then the real intent of these attacks would surface. A perception could emerge that personal security would only be regained by a decision to withdraw from a distant conflict (with no clear connectivity to the United States). The result would be achieved. Figure 1 captures these factors.

Disasters brought about by enemy action in the homeland cannot be precisely predicted, although conditions leading up to them may be generally evident. In any event, surprise should be an expected element of an attack(s). Dealing with the consequences of the attack(s) will have as much or more to do with addressing common issues as with the specific nature or cause of an attack. Planners should anticipate the breakdown of orderly society, manifested by:

Without adequate preparedness at all levels of government, across the private sector, and among the populace, the post-attack results could indeed become catastrophic. Some outcomes might include: