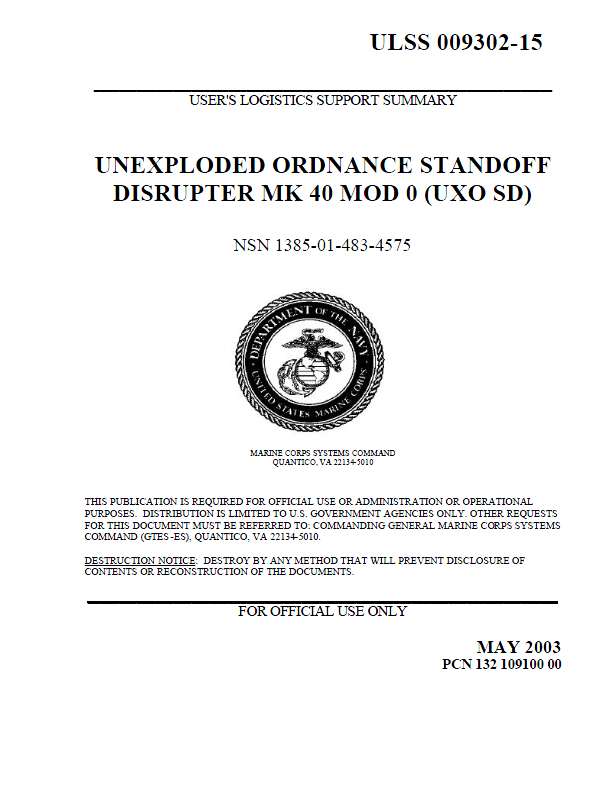 1. Introduction. The Purpose of this ULSS is to provide guidance relative to the procurement of (73) Unexploded Ordnance Standoff Disrupter MK 40 Mod 0 (UXO SD). The Explosive Ordnance Disposal (EOD) forces are increasingly challenged due to the alarming proliferation of arms and ammunition throughout the world and the trend toward greater weapon sophistication. The objectives of the program are to: increase readiness, availability, maintainability, dependability; decrease life cycle cost; and to incorporate new technology enhancements. The UXO SD is an inert tool until it is readied for use by loading military or commercially available ammunition. The UXO SD shall be capable of rendering safe and/or disrupting Unexploded
Ordnance (UXO) and improvised explosive device targets.

a. Source of Requirement. The Statement Of Need for a Stand-Off Disrupter of 28 Mar 2000
addresses the need to resolve deficiencies in performing render safe mission for UXO and
disruption of Improvised Explosive Devices (IED). MNS #M043-85-93 for EOD was signed
December 1993. The Operational Requirements Document (ORD) for Standoff Disrupters was
approved on 6 December 1999 and states that the Standoff Disrupters will be used to eliminate
hazards from ordnance which jeopardize operations conducted in support of national military
concepts.

c. System Description. The UXO SD is a modular, recoilless, inert tool specifically
designed to render-safe and disrupt UXOs. The tool comprises a recoilless cannon, lightweight
multi position stand, sights, tools, inert consumables, and a one hand portable transit case which houses all items including the stand. The UXO SD features a Capture Gate that fits onto the
Breech Plug and has a fixed compensator that is completely recoilless with a projectile mass of
200 g in the 40 mm barrel configuration. The UXO SD is stored in a transit case that can
contain the multi position stand, inert consumables and nine projectiles.

d. Operational Characteristics. The UXO SD will provide the EOD technician the capability
to render safe or disrupt UXO from a stand off position and decrease the probability of initiating
the UXO by sensor activation. This capability exceeds the requirement as stated in the ORD.
The UXO SD utilizes a sighting device to aid in accuracy during standoff attacks. EOD
technicians using standard EOD operating procedures will operate all Surface EOD equipment.
All equipment listed in this NTSP will be operable by standard EOD detachment. The
equipment has been designed as portable equipment to support the mobility and quick
deployment requirements of the EOD operating forces. As such, the equipment is not
permanently installed on ship platforms or shore activities but is assigned to individual EOD
Units and Detachments and is manned only when in use.
e. Replaced Weapons Systems and Equipment. MK 2 .50 caliber Dearmer will be
maintained until all Render Safe Procedure(s) (RSP) reflect the use of the UXO SD.
MARCORSYSCOM will provide disposition instructions via naval message upon completion of
RSP update. Logistics costs associated with the retention of the MK 2.50 until disposition
instructions are received, are minimal. 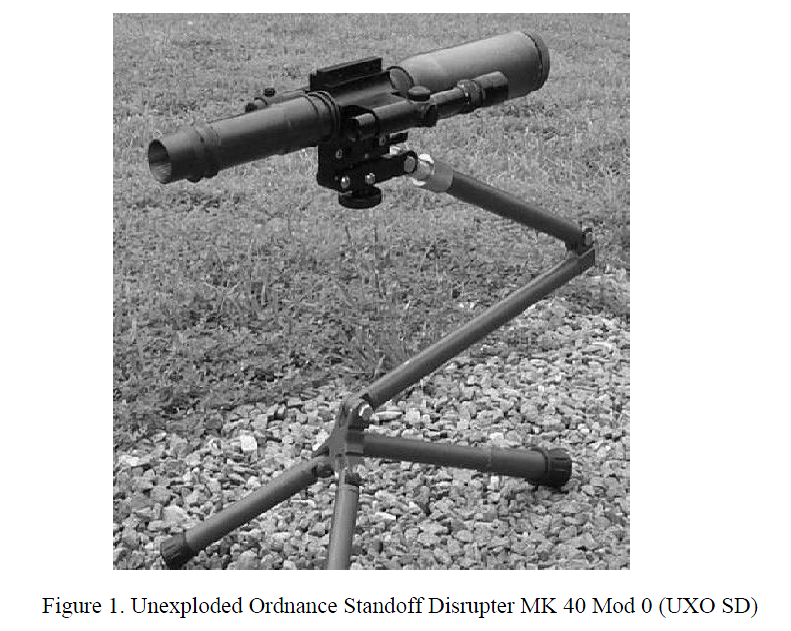 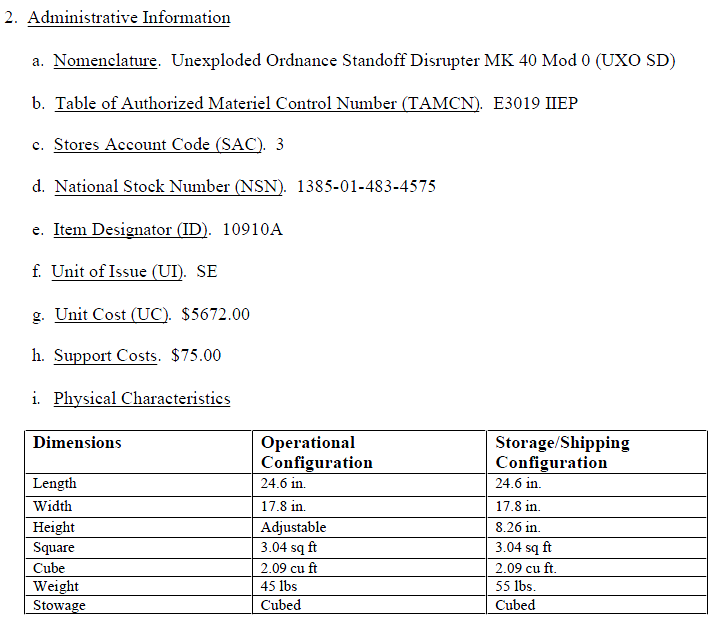