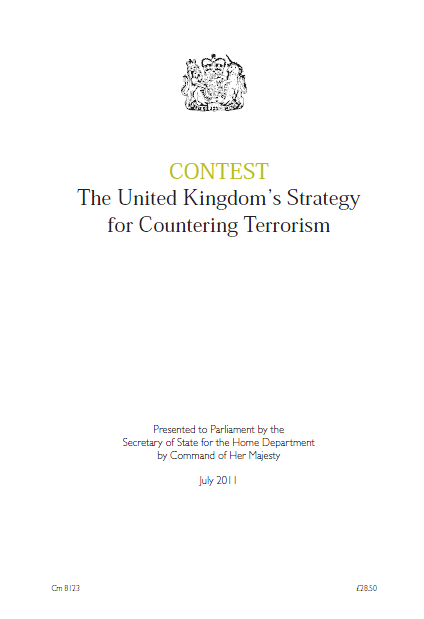 1.1 This is the third published version of the United Kingdom’s counter-terrorism strategy, CONTEST. This new strategy reflects the changing terrorist threat and incorporates new Government policies on counter-terrorism.

1.2 The aim of CONTEST is to reduce the risk to the UK and its interests overseas from terrorism, so that people can go about their lives freely and with confidence.

1.3 Last year, over 10,000 people were killed by terrorists around the world. But international law enforcement and military collaboration are changing the threats we face.

1.4 The leadership of Al Qa’ida is now weaker than at any time since 9/11. It has played no role in recent political change in North Africa and the Middle East. Its ideology has been widely discredited and it has failed in all its objectives. Continued international pressure can further reduce its capability. But Al Qa’ida continues to pose a threat to our own security; and groups affiliated to Al Qa’ida – notably in Yemen and Somalia – have emerged over the past two years to be a substantial threat in their own right.

1.5 Al Qa’ida is responsible for only a small fraction of terrorist attacks. Other groups, independent from Al Qa’ida but broadly sympathetic to its aims, continue to emerge and to conduct attacks around the world.

1.6 We judge that four factors will continue to enable terrorist groups to grow and to survive: conflict and instability; aspects of modern technology; a pervasive ideology; and radicalisation.

1.7 The threats we face here reflect global trends. Al Qa’ida, groups affiliated to Al Qa’ida, other terrorist groups and lone terrorists have all tried to operate in this country. Some have planned attacks here which we have disrupted. Others have recruited people for attacks overseas, spread propaganda and raised funds.

1.8 The threat level in the UK from international terrorism has been SEVERE for much of the period, meaning that we judge a terrorist attack in the UK to be ‘highly likely’. Threat levels continue to be set independently by JTAC.

1.9 For much of this period the greatest threat to the UK has come from terrorist groups based in Pakistan. British nationals (amongst hundreds of other Europeans) are training or operating in Pakistan and some intend to travel to Afghanistan. But over the past 12 months, the threat to UK interests from terrorists in Yemen and Somalia has significantly increased. People from the UK are also travelling to these countries to engage in terrorist related activity; some are returning to the UK to plan and conduct terrorist operations.

1.13 The Strategic Defence and Security Review (SDSR) emphasises the need to tackle the root causes of instability. This approach is reflected in contest. For terrorism we need to address not only the immediate threat of attacks but the longer term factors which enable terrorist groups to grow and flourish. Some of these factors cannot be addressed within a counter-terrorism strategy and are much wider Government priorities. Coordination between CONTEST and other government programmes is essential. Working closely with other countries will remain a priority.

1.14 CONTEST will reflect our fundamental values and, in particular, our commitment not only to protect the people of this country and our interests overseas but to do so in a way that is consistent with and indeed advances our commitment to human rights and the rule of law. Our strategy will be proportionate to the risks we face and only engage in activity which is necessary to address those risks. It will be transparent: wherever possible and consistent with national security we will seek to make more information available in order to help the public to hold the Government to account over its policy and spending decisions.

1.15 We recognise that success has been achieved through international collaboration. That will continue to be the case in future.

1.16 The purpose of Pursue is to stop terrorist attacks in this country and against our interests overseas. This means detecting and investigating threats at the earliest possible stage, disrupting terrorist activity before it can endanger the public and, wherever possible, prosecuting those responsible.

• Continue to assess our counter-terrorism powers and ensure they are both effective and proportionate;
• Improve our ability to prosecute and deport people for terrorist-related offences;
• Increase our capabilities to detect, investigate and disrupt terrorist threats;
• Ensure that judicial proceedings in this country can better handle sensitive and secret material to serve the interests of both justice and national security; and
• Work with other countries and multilateral organisations to enable us to better tackle the threats we face at their source.

2.48 Terrorists continue to use new technologies to communicate propaganda. While radicalisation continues to primarily be a social process involving contact between vulnerable people and radicalisers (not least because internet penetration in many countries with a high incidence of terrorism is still low) – the internet provides radicalisers with a vast range of materials to use once the process of radicalisation has begun. It allows for secure communication between private communities in which extremist ideas are shared and become normalised within that community. The internet also extends the reach of ideologues overseas, enabling them to preach to groups and reinforce messages of violence.

2.49 Use of social networking sites and video sharing is now commonplace. There have been a number of attempts by terrorist and extremist groups to ‘invade’ Facebook. Twitter will be used to repost media or forum articles enabling extremist content to be shared more quickly, widely and amongst people who would not normally search for extremist content. Estimates of the number of terrorism-related websites, made by experts in the field, range from several hundred to several thousand. It is clear that a few dozen are highly influential and frequented by terrorists.