UNODC Report: The Use of the Internet for Terrorist Purposes

The following document was released by the U.N. Office on Drugs and Crime on October 22, 2012. 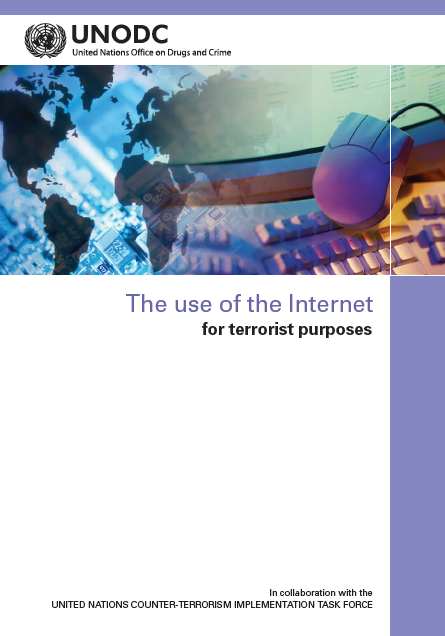 Technology is one of the strategic factors driving the increasing use of the Internet by terrorist organizations and their supporters for a wide range of purposes, including recruitment, financing, propaganda, training, incitement to commit acts of terrorism, and the gathering and dissemination of information for terrorist purposes. While the many benefits of the Internet are self-evident, it may also be used to facilitate communication within terrorist organizations and to transmit information on, as well as material support for, planned acts of terrorism, all of which require specific technical knowledge for the effective investigation of these offences.

It is a commonly accepted principle that, despite the heinous nature of their acts, alleged terrorists should be afforded the same procedural safeguards under criminal law as any other suspects. The defence of human rights is a core value of the United Nations and a fundamental pillar of the rule-of-law approach to the fight against terrorism. The present publication accordingly highlights the importance of respect for the principles of human rights and fundamental freedoms at all times and, in particular, in the context of the development and implementation of legal instruments related to countering terrorism.

7. The Internet may be used not only as a means to publish extremist rhetoric and videos, but also a way to develop relationships with, and solicit support from, those most responsive to targeted propaganda. Terrorist organizations increasingly use propaganda distributed via platforms such as password-protected websites and restricted-access Internet chat groups as a means of clandestine recruitment. The reach of the Internet provides terrorist organizations and sympathizers with a global pool of potential recruits. Restricted access cyberforums offer a venue for recruits to learn about, and provide support to, terrorist organizations and to engage in direct actions in the furtherance of terrorist objectives. The use of technological barriers to entry to recruitment platforms also increases the complexity of tracking terrorism-related activity by intelligence and law enforcement personnel.

15. Online payment facilities may also be exploited through fraudulent means such as identity theft, credit card theft, wire fraud, stock fraud, intellectual property crimes and auction fraud. An example of the use of illicit gains to finance acts of terrorism can be seen in the United Kingdom case against Younis Tsouli (see para. 114 below). Profits from stolen credit cards were laundered by several means, including transfer through e-gold online payment accounts, which were used to route the funds through several countries before they reached their intended destination. The laundered money was used both to fund the registration by Tsouli of 180 websites hosting Al-Qaida propaganda videos and to provide equipment for terrorist activities in several countries. Approximately 1,400 credit cards were used to generate approximately £1.6 million of illicit funds to finance terrorist activity.

17. In recent years, terrorist organizations have increasingly turned to the Internet as an alternative training ground for terrorists. There is a growing range of media that provide platforms for the dissemination of practical guides in the form of online manuals, audio and video clips, information and advice. These Internet platforms also provide detailed instructions, often in easily accessible multimedia format and multiple languages, on topics such as how to join terrorist organizations; how to construct explosives, firearms or other weapons or hazardous materials; and how to plan and execute terrorist attacks. The platforms act as a virtual training camp. They are also used to share, inter alia, specific methods, techniques or operational knowledge for the purpose of committing an act of terrorism.

18. For example, Inspire is an online magazine allegedly published by Al-Qaida in the Arabian Peninsula with the stated objective of enabling Muslims to train for jihad at home. It contains a large amount of ideological material aimed at encouraging terrorism, including statements attributed to Osama Bin Laden, Sheikh Ayman al-Zawahiri and other well-known Al-Qaida figures. The fall 2010 edition included practical instructional material on how to adapt a four-wheel-drive vehicle to carry out an attack on members of the public and how a lone individual could launch an indiscriminate attack by shooting a gun from a tower. The publication even suggested a target city for such an attack, in order to increase the chances of killing a member of the Government.

202. There is a vast range of data and services available via the Internet which may be employed in an investigation to counter terrorist use of the Internet. A proactive approach to investigative strategies and supporting specialist tools, which capitalizes on evolving Internet resources, promotes the efficient identification of data and services likely to yield the maximum benefit to an investigation. In recognition of the need for a systematic approach to using technological developments relating to the Internet for investigative purposes, the Raggruppamento Operativo Speciale of the Carabinieri of Italy developed the following guidelines, which have been disseminated through the University College Dublin, master’s programme in forensic computing and cybercrime (see section IV.G below) and implemented by domestic enforcement authorities of many member States of the International Criminal Police Organization (INTERPOL) and the European Police Office (Europol):

Protocol of a systematic approach

Where permitted by domestic law, some law enforcement authorities may also employ digital monitoring techniques facilitated by the installation of computer hardware or applications such as a virus, a “Trojan Horse” or a keystroke logger on the computer of the person under investigation. This may be achieved through direct or remote access to the relevant computer, taking into consideration the technical profile of the hardware to be compromised (such as the presence of antivirus protections or firewalls) and the personal profile of all users of the device, targeting the least sophisticated user profile.

428. Public-private partnerships specifically targeting terrorist use of the Internet could also provide a means to promote clear guidelines regarding information-sharing between the private and public sector, consistent with applicable data protection regulations. A good basis for information-sharing guidelines is provided by the Council of Europe “Guidelines for the cooperation between law enforcement and Internet service providers against cybercrime”. The focus of these guidelines is the establishment of relationships of mutual trust and cooperation between public and private sector stakeholders as a foundation for cooperation. The guidelines also emphasize the need to promote efficient and cost-effective cooperation procedures. Law enforcement authorities and Internet service providers are encouraged to engage in information exchange to strengthen their capacity to identify and combat cybercrime through regular meetings and the sharing of good practices and feedback. The guidelines also encourage the establishment of formal partnerships and written procedures as a basis for longer-term relationships, to ensure, inter alia, that appropriate protections are provided that the partnership will not infringe upon the legal rights of industry participants or the legal powers of law enforcement authorities.

429. Recommended measures to be taken by law enforcement authorities pursuant to the guidelines include:

430. Recommended measures to be taken by Internet Service providers pursuant to the guidelines include: