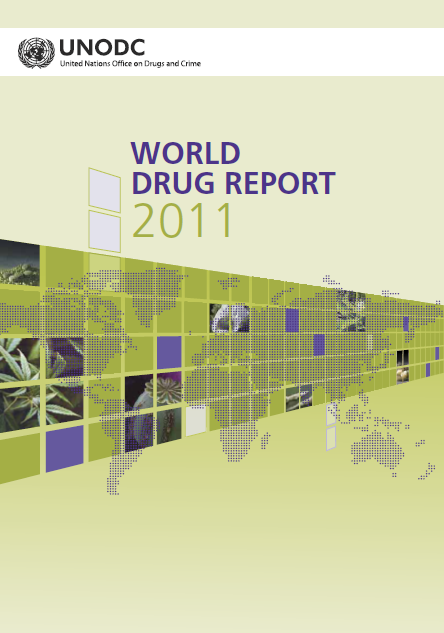 Globally, UNODC estimates that, in 2009, between 149 and 272 million people, or 3.3% to 6.1% of the population aged 15-64, used illicit substances at least once in the previous year. About half that number are estimated to have been current drug users, that is, having used illicit drugs at least once during the past month prior to the date of assessment. While the total number of illicit drug users has increased since the late 1990s, the prevalence rates have remained largely stable, as has the number of problem drug users, which is estimated at between 15 and 39 million.

Cannabis is by far the most widely used illicit drug type, consumed by between 125 and 203 million people worldwide in 2009. This corresponds to an annual prevalence rate of 2.8%-4.5%. In terms of annual prevalence, cannabis is followed by ATS (amphetamine-type stimulants; mainly methamphetamine, amphetamine and While there is no established definition of problem drug users, they are usually defined by countries as those that regularly use illicit substances and can be considered dependent, and those who inject drugs. ecstasy), opioids (including opium, heroin and prescription opioids) and cocaine. Lack of information regarding use of illicit drugs – particularly ATS – in populous countries such as China and India, as well as in emerging regions of consumption such as Africa, generate uncertainty when estimating the global number of users. This is reflected in the wide ranges of the estimates. While there are stable or downward trends for heroin and cocaine use in major regions of consumption, this is being offset by increases in the use of synthetic and prescription drugs. Non-medical use of prescription drugs is reportedly a growing health problem in a number of developed and developing countries.

Moreover, in recent years, several new synthetic compounds have emerged in established illicit drug markets. Many of these substances are marketed as ‘legal highs’ and substitutes for illicit stimulant drugs such as cocaine or ‘ecstasy.’ Two examples are piperazines and mephedrone, which are not under international control. A similar development has been observed with regard to cannabis, where demand for synthetic cannabinoids (‘spice’) has increased in some countries. Sold on the internet and in specialized shops, synthetic cannabinoids have been referred to as ‘legal alternatives’ to cannabis, as they are not under international control. The control status of these compounds differs significantly from country to country.

In terms of the health consequences of drug use, the global average prevalence of HIV among injecting drug users is estimated at 17.9%, or equivalently, 2.8 million people who inject drugs are HIV positive. This means that nearly one in five injecting drug users is living with HIV. The prevalence of Hepatitis C among injecting  rug users at the global level is estimated at 50% (range: 45.2%-55.3%), suggesting that there are 8.0 million (range: 7.2 – 8.8 million) injecting drug users worldwide who are also infected with HCV. Deaths related to or associated with the use of illicit drugs are estimated between 104,000 and 263,000 deaths each year, equivalent to a range of 23.1 to 58.7 deaths per one million inhabitants aged 15-64. Over half of the deaths are estimated to be fatal overdose cases.

The global area under coca cultivation continued to shrink to 149,1002 ha in 2010, falling by 18% from 2007 to 2010. There was also a significant decline in potential cocaine manufacture, reflecting falling cocaine production in Colombia which offset increases identified in both Peru and the Plurinational State of Bolivia. While it is difficult to estimate total global amphetamine-type stimulants manufacture, it has spread, and more than 60 Member States from all regions of the world have reported such activity to date. The manufacture of amphetamines-group substances is larger than that of ecstasy. Methamphetamine – which belongs to the amphetamines-group – is the most widely manufactured ATS, with the United States of America reporting a large number of detected illicit laboratories. Cannabis herb cultivation occurs in most countries worldwide. Although there was insufficient data available to update the global cultivation estimate, the relatively stable seizure trend suggests a stable level of production. Indoor cultivation of cannabis herb is still largely limited to the developed countries of North America, Europe and Oceania. Cannabis resin production estimates were not updated this year, but based on ARQ replies to UNODC, Afghanistan and Morocco were major producers.

Trafficking flows vary according to the drug type involved. The most commonly seized drug type, cannabis herb, is often locally produced and thus, international trafficking is limited. Cocaine and heroin are trafficked both intra- and inter-regionally, though considerable amounts are consumed quite far from the countries of cultivation and production. Most ATS manufacture occurs in the region of consumption, whereas their precursor chemicals are trafficked interregionally. The long-term trends show increased seizures for all the major drug types. Between 1998 and 2009, seizures of cocaine, heroin and morphine, and cannabis almost doubled. ATS seizures more than tripled over the same period.

Though it is still the most commonly seized drug, by far, the relative importance of cannabis in total illicit drug seizures has declined, rendering the other drug types – particularly ATS – increasingly prominent. Looking at recent trends, global seizures of ATS rose to a record high in 2009, driven by increases in methamphetamine seizures. Ecstasy seizures, on the other hand, decreased. The predominant type of ATS seized varies according to region, with methamphetamine dominating in Oceania, Africa, North America and much of Asia.