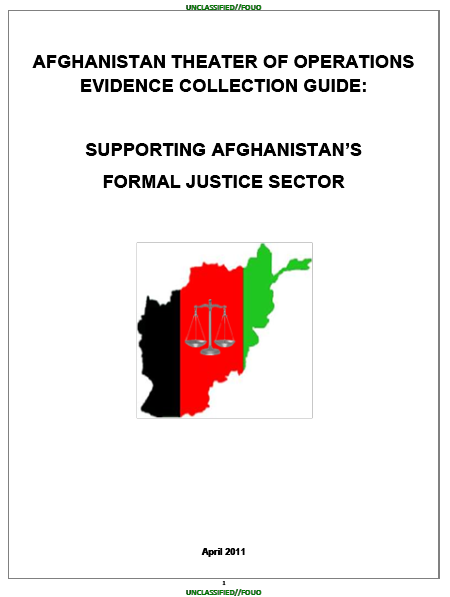 The transition from law of war-based detentions to evidence-based criminal detentions is underway. To fully support this aspect of our counter-insurgency (COIN) mission, Coalition Forces, partnered with Afghan units, are working in the field to provide information and evidence that supports detention operations. These efforts will most fully support the COIN effort if detainees suspected of committing criminal offenses are referred to the Afghan criminal justice system for pre-trial detention, prosecution, and serving of sentence for their crimes, based upon evidence which is used and understood in Afghan criminal courts.

This Guide will assist Coalition Forces and Afghan units by providing practical means and methods to properly identify, collect, preserve, and provide evidence that will be recognized and accepted by the Afghan criminal justice system. Using this Guide, Coalition Forces and partnered Afghan units can provide usable evidence, including statements, sketches, photographs, and physical evidence, to the Afghan authorities for each case. This justice effort continues in tandem with and complements existing intelligence exploitation which facilitates our own targeting process. To the greatest extent possible, however, the creation of unclassified products and declassification of classified products will significantly enhance in the transferability of evidence to the Afghan courts.

Built upon original work of Regional Commands, enhanced by the Detainee Criminal Investigation and Prosecution Training Team, Legal Operation Directorate, CJIATF-435, and coordinated with Battle Space Owners and Afghan partners throughout Afghanistan, this Guide will assist Coalition Forces and partnered Afghan units in properly handling and documenting evidence. While each nation within the Coalition Forces may have independent national authorities to adhere to in the detention process, the techniques provided in this Guide will assist all Coalition Forces to understand the importance of the collection of evidence for each suspect in order to continue the transition to evidence based-criminal detentions.

II. Why Evidence Collection is Vital

1. The Government of the Islamic Republic of Afghanistan (GIRoA) is a sovereign entity with its own criminal justice system. As we strive to improve adherence to the Rule of Law in Afghanistan, we must enable and support the criminal justice system. Capturing units must provide evidence and witness statements for use in an Afghan court of law to enable the National Security Prosecutor’s Unit (NSPU) or a provincial criminal court to prosecute and convict criminal suspects. Appropriate evidence collection may result in admissible evidence being used in support of effective prosecutions. To the greatest extent possible, evidence collection and case preparation will be performed by Afghan partnering forces. Although USFOR-A and ISAF continue to have a need to exploit evidence for potential intelligence value, units should ultimately turn all evidence associated with a suspect over to Afghan authorities. Therefore, units must have a plan to transfer both a copy of the case file as well as all the evidence and statements with suspects to the appropriate local, provincial, or national governmental authorities or to a national security court.

2. The Afghan legal system does not specify a standard of proof similar to that found in most common law western legal regimes. Instead, units must coordinate with the relevant local, provincial, or national prosecutors and judges to determine the specific type and amount of evidence deemed credible. Some prosecutors or judges might require a slightly different format or type of evidence than is accepted by most other authorities. Evidence collection practices and the type of evidence to be collected, as suggested in this Guide, should be tailored to fit local court requirements as necessary.