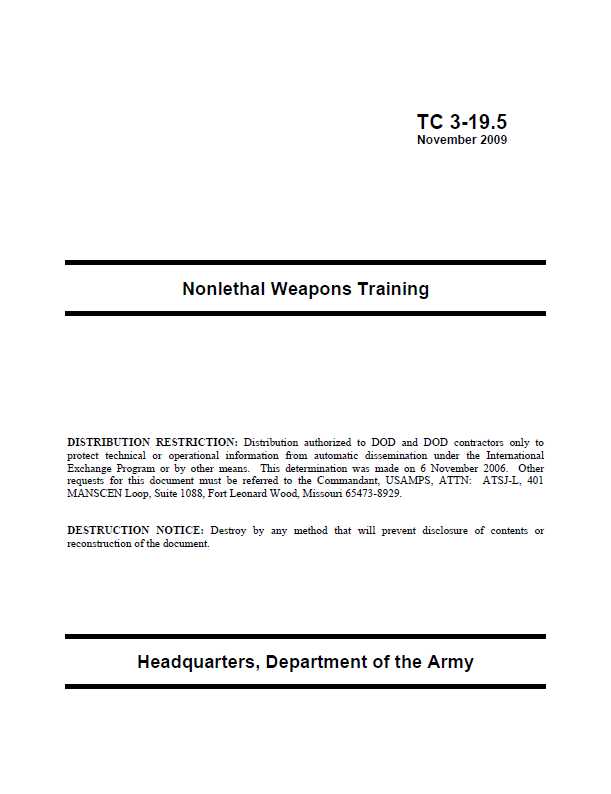 1-1. TC 3-19.5 provides guidance on specific NLW training with emphasis on User Training, Train-the-Trainer Training, and Unit Training. It is designed to be used with FM 3-22.40, Multi-Service TTP for the Tactical Employment of Nonlethal Weapons, and the Multi-Media Training Support Package (MMTSP). The MMTSP is a Warrior TSP designed to train individual tasks.

1-2. TC 3-19.5 is designed to train leaders and Soldiers, primarily at company-level and below, on the tactical employment of NLW in support of operating forces.

1-3. Leader training for Field Grade Officers, though not included in this publication, consists of formulating nonlethal policies, establishing the appropriate rules of engagement (ROE), and deciding when the use of nonlethal capabilities is best suited.

1-4. United States Forces will respond to a myriad of situations across the range of military operations. At the same time, the military will face increased media attention, worldwide environmental concerns, and a low national tolerance for long, lethal, and costly campaigns even where vital interests of the nation are clearly defined. Nonlethal capabilities can expand options and tools available to Commanders.

1-5. NLW enhance the Army’s ability to meet requirements of applying force proportional to the threat and discriminating in the application of force during military operations. Nonlethal capabilities can reduce the risks of perceived excessive force, promote international political support, alleviate environmental concerns, enhance post conflict transitions and termination, and reduce the cost of post conflict reconstruction.

1-6. Many situations that begin as standoffs have the potential to escalate to a point where lethal force may be justified. However, early and aggressive use of NLW may prevent many of these types of situations from escalating to deadly force levels. In this aspect NLW can reduce Soldier and non-combatant injuries by stopping threats from a safe distance.

1-7. It must be made clear that, NLW are not meant to be a substitute for lethal force. Commanders must ensure that NLW are not deployed without lethal support in the form of lethal overwatch. Employing lethal overwatch in support of NLW benefits the commander in several ways. First, lethal overwatch provides Soldiers employing NLW with confidence in knowing that if the situation were to escalate lethal fire is immediately available. Additionally, lethal overwatch becomes the on-scene eyes and ears of the commander providing valuable information that could influence future actions and planning.

1-8. NLW and capabilities provide a valuable set of tools for a variety of missions, particularly when deadly force is not authorized or the preferred course of action. If used effectively, NLW can contribute to mission accomplishment and:

1-12. Counter-Materiel capabilities currently consist of vehicle stopping / arresting devices. Some of the items available are the Portable, Vehicle Arresting Device (M1, PVAB), the Vehicle Lightweight Arresting Device (M2, VLAD) and an array or caltrops and spike strips. The above listed and other Counter-Personnel and Counter-Materiel devices can be found in the current Nonlethal Capabilities Set (NLCS). Appendix A provides a detailed listing of NLCS items.

1-13. The NLCS is designed to equip a Brigade size element with all the appropriate equipment to carry out its basic missions in accordance with current Rules of Engagement (ROE) and Escalation of Force (EOF) procedures. The NLCS is an updated version of the Platoon NLCS which contained mainly riot control gear. These kits are more mission specific and are tailored to a specific purpose.

1-14. A NLCS contains the equipment required to satisfy most operational requirements for an enhanced capability to apply nonlethal force. It is designed to augment lethal forces and will be employed in a manner that will incapacitate personnel or material, while minimizing fatalities or permanent injury or damage to property and the environment. 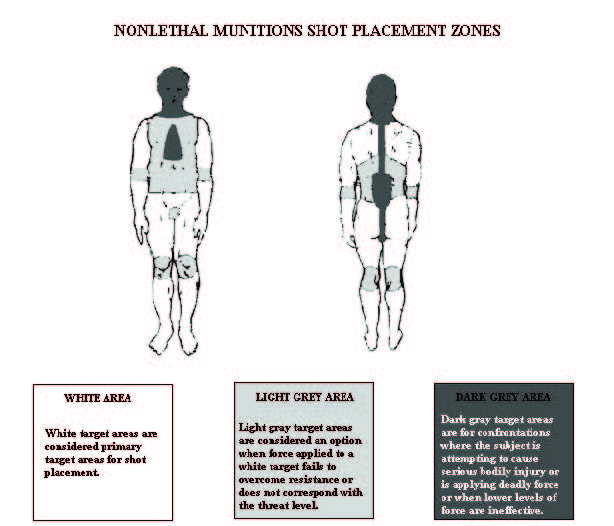 2-11. The “sweet spot” is the finite distance between the point away from the launcher muzzle where the projectile has lost enough energy that it will not cause serious injury and the point where the projectile has lost so much energy that a hit is no longer effective and/or accurate. The sweet spot will be different for each munition, but typically it is between 10 and 55 meters.

2-12. Proper target range estimation is an essential skill for individuals using nonlethal munitions. Intentionally using a nonlethal round closer than the minimum safe distance may increase the risk of serious injury or death. Using the munition beyond the maximum effective range will result in a wasted shot or the striking of an unintended target as the round’s flight path degrades as it looses its energy. Table 2-1 illustrates the effects of nonlethal munitions at various distances. 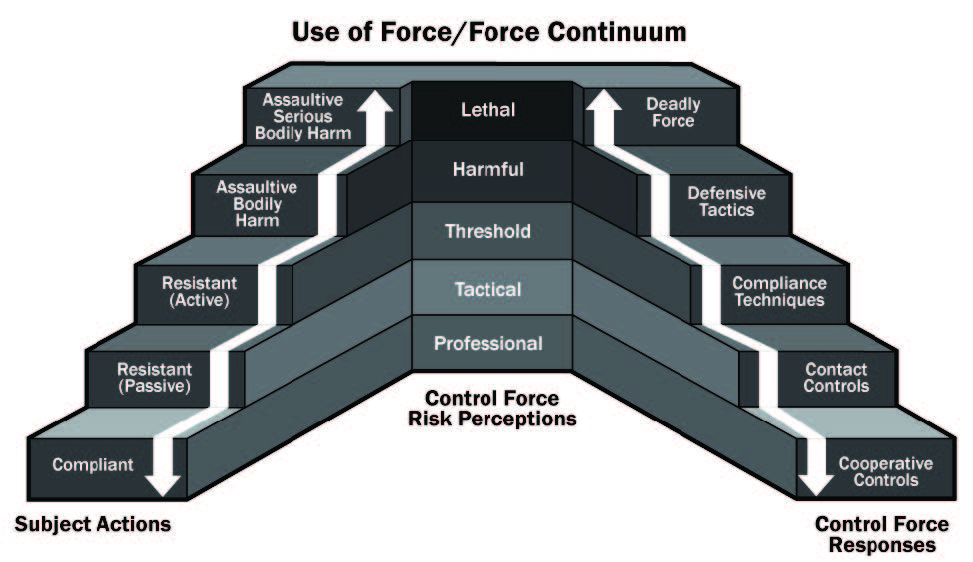 8-23. Drawing. There are three (3) basic ways of drawing the OC canister from the holster. Each method is acceptable; however, practice is recommended on each. Drawing techniques include the following three methods:

Note: As with a firearm or side handle baton, it is impractical to draw the OC canister with the weak hand; therefore, a weak side draw should not be used.

8-24. Gripping. Proper grip of the handheld OC canister is just as important as drawing the canister. Grip the canister using a “C” clamp. The fingers are extended firmly around the canister and snugly kept together with the thumb over the safety lid until ready to dispense. The index finger is under the nozzle guard. Actuation of the OC occurs by using the thumb or index finger, whichever feels most comfortable.

9-1. The primary electro-muscular disruption device (EMD) currently used by U.S. Army personnel is the X26E TASER. This device causes electro-muscular disruption as a safe and effective way to incapacitate personnel at distances up to 35 feet. A pronged dart system strikes anywhere on the body and delivers 50,000 volts, causing instantaneous incapacitation to the targeted individual. Appendix D describes the TASER Performance Evaluation.

9-2. X26E is a device used to fire two (2) barbed projectiles (probes) into a target with the purpose of delivering an electrical shock to subdue the target without harm to the target or the operator. The EMD weapons stun and override the sensory and motor nervous systems causing uncontrollable contractions of the muscle tissue.

9-3. The X26E is operated much like a standard issue sidearm complete with a laser sight. When the trigger is pulled, the two barbs are propelled by compressed nitrogen. The barbs are connected to the device by insulated wires and are effective within two (2) inches of the subject’s body (the electrical charge can penetrate up to two (2) inches of cumulative clothing).

9-4. When the circuit is completed (both barbs must hit the target), a five (5)-second cycle of electrical pulses is initiated and sent through the wires into the subject’s body. The cycle can be stopped by positioning the safety down to SAFE or can be reapplied by pulling the trigger a second time.

9-5. Figure 9-1 illustrates the various parts and functions of the X26E TASER. 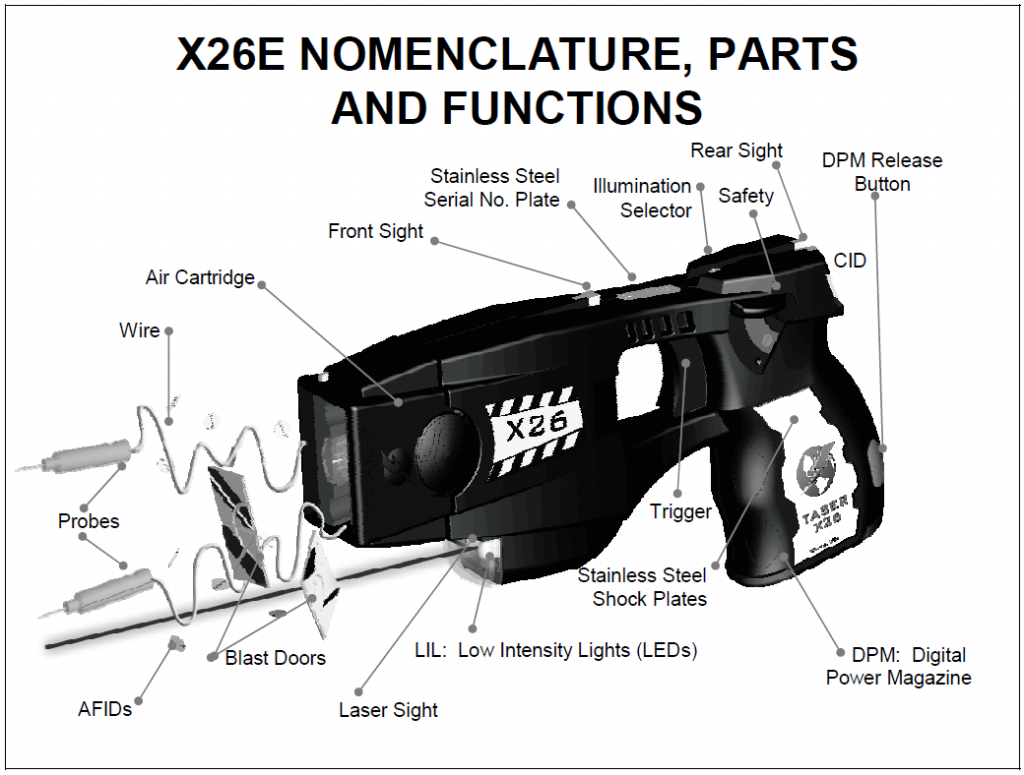