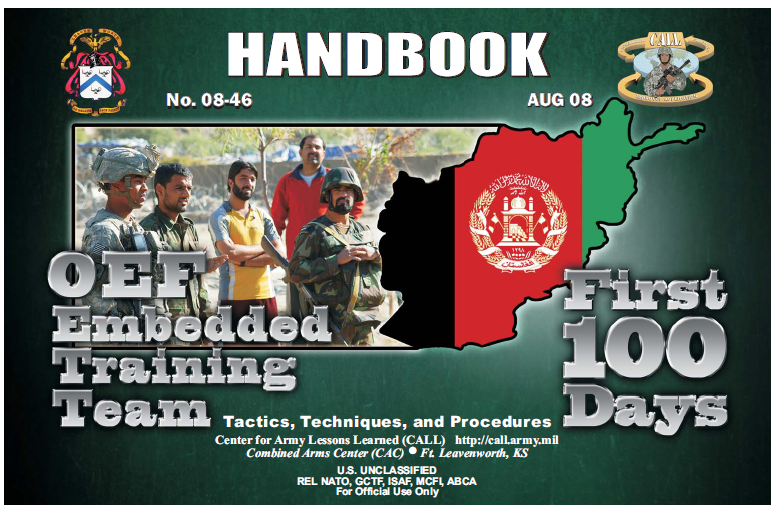 This handbook is written for you, the embedded training team (ETT) member. Traditionally, this mission was reserved for Special Forces’ units or teams. With the revision of Army Field Manual 3.0, Operations, this is now a mission for general purpose forces. The Army has not yet officially designated one organization or agency as the ETT proponent; therefore, information concerning TTs circulates at all levels. This handbook has been vetted by the Joint Center for International Security Forces Assistance, 1st Infantry Division, Combined Security Transition Command-Afghanistan, and the Center for Army Lessons Learned Integration Network.

There are two key facts ETT members must consider:

• Your first 100 days in theater will set the tone for the rest of your tour.
• You will not have much time for professional reading while at the predeployment site. So, if you only read one handbook, we think it should be this one.

The subjects in this handbook are a compilation of the most important topics raised by your predecessors during in theater interviews and redeployment surveys.

As an embedded training team (ETT) member, you can count on playing the roles of advisor and mentor. Some of you may also be trainers.

• Military advisor: Soldier sent to foreign nations to aid that nation with its military training, organization, and other military tasks.
• Mentor: A trusted friend, counselor, or teacher; usually a more experienced person.

Doctrinally, ETT members conduct an advisory mission; however, within Afghanistan, the use of the term mentor is more readily used by the Afghan National Security Forces (ANSF) (e.g., Afghan National Army [ANA], Afghan National Police [ANP], etc.). An effective advisor performs not only the advisory role, but will be a mentor to his counterpart.

The ANSF unit has much to gain from coalition advisors:

A great advisor can:

• See solutions to seemingly unsolvable problems.
• Work from the commander’s intent and guidance.
• Orchestrate events to ensure success from behind the scenes (focus on the mission versus seeking personal credit).

A great advisor must:

• Be part diplomat and part warrior.
• Stay aware of local power struggles and how they will affect his organization.
• Attempt to influence ANSF according to long-term interests rather than short-term gains.

The ANA are skillful in:

The ANP are skillful in:

The Afghan Border Police (ABP) are skillful in:

Everyone should be skillful in:

Missions of an ANA Advisor/PMT

• Mentor ANCOP element in participating in the JRCC process for that HQ.
• Provide coordination support to the ANCOP element during cross-boundary/QRF operations.