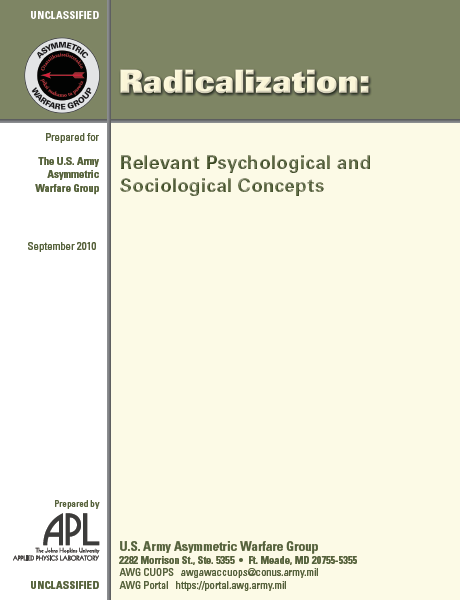 This paper is a basic reference guide for the military. It provides a summary of main ideas and trends in the psychological and sociological literature as they pertain to the process of radicalization and to the roots and context of radicalism as they pertain to the participants. It is meant to be a general read, understandable to the nonacademic, with many recommendations for further reading. It is also meant to be fairly broad and complete, but with the recognition that the topic is new and evolving, with new threads constantly emerging. The paper is also relegated to the prevailing or fairly well-studied theories and mechanisms.

There are sixteen theories that have been proposed to explain the underlying cause of radicalization. They range from explanations due to societal and economic pressures, social and group dynamics, development of identity, antisocial disorders, and even specific cognitive processes involved in the decision to commit violence. There is no single explanation as to why certain individuals or groups move to violent political action. Examples are provided to demonstrate that diverse reasons are applicable across the spectrum of radical groups and terrorists, and also to show that there are usually multiple reasons operating for the radicals themselves. A single theory cannot explain all radicals, and rarely can it explain even a single one to satisfaction. However, understanding the multiple theorized causes helps us understand motivations, behaviors, and worldview of this population much more so than a simplistic view that they must be irrational actors with clinical psychological problems. The literature is fairly agreed upon this: The terrorist or radical rarely meets the definition of a psychopath.

The theories are explained both in their general state and in how they are applied to the specific subject of radicalism. Those theories that have clinical definitions or methods of assessment have a short section on those subjects.

Along with the possible underlying causal theories, twelve mechanisms are used to explain the means by which a crowd, group, or individual psychologically undergoes the process of radicalization. These mechanisms elucidate the motivations and processes by which any of these types (crowd, group, or person) move from nonviolence to violence (and beyond to suicide, use of terror, etc.). They include the pivoting off an overreaction by the state power, to the narrative of martyrdom, to intragroup competition, to the internalization of a political grievance. In each case, an illustrative example is given from the real world, from Timothy McVeigh to the Provisional Irish Republican Army (PIRA), to show how these means allowed the radical to move from legal behavior to violent acts. Again, single mechanisms are not enough to explain the full complexity of the 30+-year campaign of the PIRA. But they help the reader associate the means with the outcome.

The twelve mechanisms are:

Within each mechanism, potential observed behaviors or operations can be derived to show how this process would present itself to those charged with circumvention, prevention, or defense against radicalism. Mostly these observables have been proposed and are not yet empirically proven or verified. When possible, the veracity of the claimed observable has been stated.

There are programs established in certain countries that attempt to disengage or “deradicalize” individuals. These programs are few in number and most do not, to our knowledge, undertake a scientific research program to assess their success or failure. Disengagement programs, in which the focus is to get the individual to stop their participation in radical activities rather than to abandon their ideological agreement with the group or movement, are far more common. This assumes that the decision to disengage is rarely attributable to ideological reasons (the same applies to entry into the radical movement, interestingly) and that cessation of violent behavior is easier than reprogramming of ideology. Re-establishing a beneficial social network, such as re-establishing familial ties or finding the radical a wife is a familiar tactic in these programs, as well as providing amnesty or assistance in finding employment.

The theories and mechanisms are good background material for the reader interested in counter-radical application, but we have also identified sixteen “risk factors” within the literature. Not all of these factors have been experimentally derived or are empirically based. They do, however, merit the attention of the reader due to their importance in the establishment of any counter-radical program or process.

The sixteen risk factors are:

Radicalization by Political Grievance is when an individual is moved to individual radical action and violence in response to political trends or events.

Description: Perceived grievances are supported by ideological frameworks with a view of perceived problems, a vision of the future, and a prescription for action. Cases of individual radicalization to political violence (when the individual acts alone rather than as part of a group) are relatively rare. In such cases, the individual is likely to have some association with a larger intellectual movement (McCauley & Moskalenko, 2008). Ideology and narratives play multiple roles in self-radicalization; however, the specific mechanism of internalization and processing is sufficiently idiosyncratic to prevent discernable trends from emerging across cases.

From the individual perspective, self-efficacy (the belief that one is capable of goal-directed behavior to affect the operational environment) and self-agency (the sense that one is the primary creator and principal driver of a particular thought or movement) are typically high in individuals who act alone in opposition to a political grievance. Self-efficacy and self-agency are often correlated with narcissistic tendencies; however, their presence does not necessarily indicate the presence of the personality disorder or the associated leadership style.

There is a greater probability of some degree of psychopathology in this category than in any other (McCauley & Moskalenko, 2008), although the psychopathology is rarely the proximal factor in the process. Rather it is a combination of some underlying psychopathology (major or minor) along with specific environmental conditions that propel the individual toward radical behavior. In certain cases, such as paranoid schizophrenia with underlying thought disorder, the violence is a result of disordered cognition and a break from reality, and not necessarily truly politically motivated.

Observables: Most of the literature attributing clinical mental disorder to radicalism speaks of the remorseless personality type, psychopathy or sociopathy (Victoroff, 2005). Common theories hold that certain individuals possess or lack certain personality traits that make them more susceptible to radicalization and engaging in terroristic behavior than those individuals who do not. This personality-defect model asserts that this type of personality is largely the result of a dysfunctional childhood that fosters an impoverished sense of self and hostility toward authority. This resentment to authority may be an outgrowth of unconscious hostility toward abusive or controlling parents and is later reflected in the adult terrorist’s rigid mindset (Maile et al, 2010). 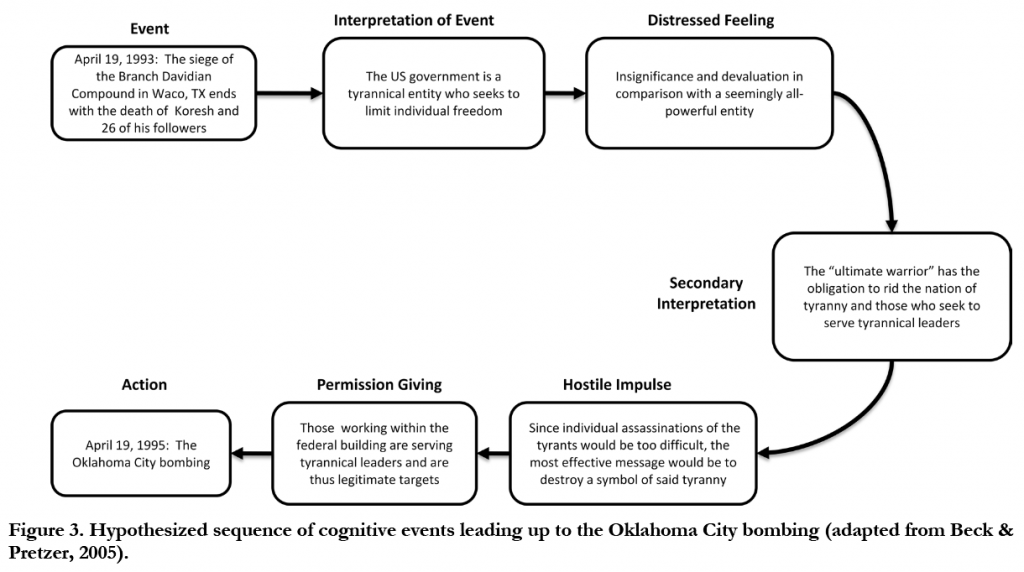