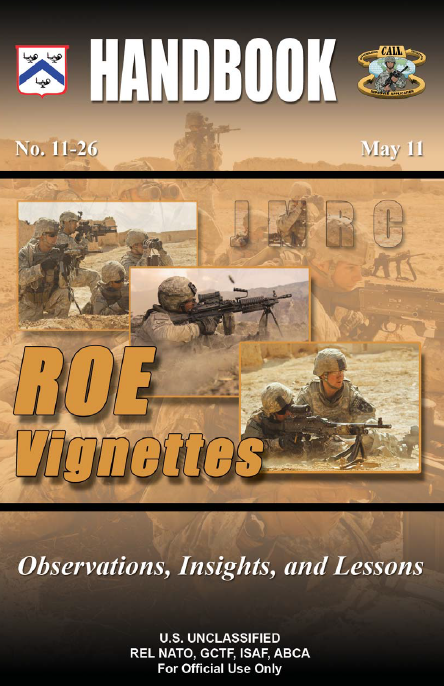 Vignettes put the rules of engagement (ROE) into context. Rules can be memorized, but without context, those rules have little meaning or value. There is not a repository of vignettes readily accessible to Soldiers. This handbook addresses that shortcoming for units heading to Afghanistan. Soldiers can use this handbook individually, but its value is greatly increased through group discussion and interaction with leaders and judge advocates.

•• Soldiers must understand the basic definitions of hostile act, hostile intent, and what constitutes positive identification. Soldiers must be able to apply — not just know — those definitions in a dynamic, confusing, and dangerous environment.

•• Determining what is a threat is dependent upon what you know about your situation. Your knowledge needs to extend beyond your sector of fire to the culture, the patterns of life, and the second- and third-order effects of your actions.

•• The ROE are generally permissive. It is a Soldier’s responsibility to know the ROE and the environment to make the ROE an integral part of accomplishing the mission.

The usual instructor for a ROE or escalation of force (EOF) class is the local unit judge advocate or your company commander. These individuals generally have expertise and a solid understanding of the legal and policy underpinnings of the ROE. However, you are a Soldier preparing to deploy and you want the Soldier’s perspective on how these rules apply in the field, in combat. The ability to recite the legal definition of hostile act may be an indication that you understand the concept, but knowing the definition is not the same as being able to apply a measured and proportional response in a dynamic, confusing, and dangerous situation. What you need is street smarts when it comes to applying the ROE. Helping you gain instinctive understanding within the context of the theater of operations is the intent behind this compilation of vignettes.

The vignettes come from the streets. They come from the experiences of Soldiers deployed to combat theaters — primarily Afghanistan. The ROE that are applied here are those for Soldiers operating under the International Security Assistance Force (ISAF) rules of engagement. If you previously deployed, you may notice some differences under the ISAF rules. If you see those differences in these vignettes, point them out during the discussions.

Highlighting the differences can help others internalize the ISAF rules. Always remember that regardless of subtle differences in terminology or definitions, your right to self-defense remains unchanged. Even if you have a previous deployment as part of ISAF, you may not have heard of the Tactical Directive, the Tactical Driving Directive, or the Commander’s Counterinsurgency (COIN) Guidance. These documents contain additional rules, but for the most part, they re-emphasize the importance of protecting the civilian population. Along those lines, you will see many of the discussions turning away from what would be allowed under the ROE to what you really think you should do under a particular set of facts. This is the “can I?/should I?” analysis that should be at the forefront of your discussions.

These vignettes do not work alone. They are intended to be used in group environments and as the spark to ignite further discussions at the fire team and squad levels. In many cases, you will find that a vignette asks a distinct question and gives an exact “right/wrong, yes/no” answer. In other cases, you will find the discussions less concrete. That is the reality of the complexity of the battlefield. Challenge the scenarios as you work through them, but keep the basic concepts of the ROE and COIN doctrine intact. There may be policy or legal constructs with which you disagree, but your goal should be to prepare yourself and your battle buddies to operate in the current legal and policy environment.

This is not a compilation that should necessarily be read cover to cover. It is an interactive compilation. Take your time on each vignette — the value of the training will be directly related to the effort you put forward as an individual and as a member of a fire team or squad. There are no additional resources required, no time limits, and no grades. The real test will come in a combat theater, and success will be measured in human life.

These vignettes are designed for you. Whether you, your commander, or your unit’s judge advocate initially presents your Soldiers the rules — the law of armed conflict (LOAC), ROE, EOF standing operating procedures (SOP), detainee operations SOP, et al. — you are uniquely situated to incorporate the rules into your unit’s mindset as you develop its discipline and warrior ethos. These vignettes are a tool you can use to help you do just that.

As an artisan can make a tool do far more work than a beginner could, you can make these vignettes more effective as you craft their use. Most of your Soldiers can read them and understand most of the ideas presented. If you read your Soldiers the question and answer and do nothing more, you have added command emphasis and perhaps clarified some ambiguities. But you can maximize the effectiveness of this tool if you use these vignettes as a stepping-off point to further discussion.

How can you best use this tool? Hypothetically, place your tactical unit in the position each vignette describes. Discuss the tactical situation and strategic ramifications of following or violating the rules in the scenario. Ask your Soldiers questions like, “Could you have placed yourself in a better situation?” “How can you best resolve the situation tactically and legally?” “What is likely to follow?” Inject alternative scenarios, such as “What if the man was carrying an AK-47 instead of a rocket-propelled grenade (RPG) or standing in front of a home instead of an empty field?” After you answer the question “Can you? (do something legally),” ask the question “Should you?”

Walk your Soldiers through the legal analysis. When they get the right answer, ensure they can articulate why — well-reasoned but in their own words. This should sharpen their reaction time as they develop confidence in their responses. Additionally, this training should help them provide more detailed reports and statements during your tour when called upon to do so. Changes to the rules and an evolving area of operations may tweak the best response on one or more of these vignettes. When in doubt as to the correct answer for today, consult your commander or your unit judge advocate. The COIN environment in which we operate today in Afghanistan is complex. Day-to-day success is measured less by mission accomplishment and more by whether our actions have moved the population closer to the Afghan government or closer to the insurgents. How your Soldiers react will shape your area of operations and can contribute significantly to our ultimate success. The rules will help your Soldiers focus on the mission by freeing them from destructive urges and encouraging actions that advance our goal of separating insurgents from the population. These vignettes can help you hone your Soldiers to operate successfully within the rules on today’s complicated battlefield.

Consequently, the success of these vignettes rests upon you, for their success and yours will be measured by how well your Soldiers perform in the heat of battle when unexpected situations arise and they are called upon to decide in an instant how to apply their tactical training and the rules.

Introduction for the Judge Advocate

From a teaching standpoint, bullet comment slides are likely not the preferred method for educating an Army at war on the frustrating complexities of restraining the use of force. Rote memorization of the definitions of hostile act and hostile intent will have little value for a Soldier faced with split-second, life and death decisions. The COIN Soldier needs an in-depth understanding of the political, tactical, strategic, and cultural environments in which he will operate. Situational awareness coupled with an understanding of the ROE requires more than a quarterly 50-minute block of instruction. Accordingly, this collection of vignettes is intended to  pick up where the judge advocate class ends. The key to success is support from the tactical leaders to dedicate time and energy to working through the scenarios. However, continued engagement with the judge advocate is essential to quality control and building a Soldier’s confidence in his ability to implement the ROE on the battlefield.

These vignettes were compiled and the discussions prepared by judge advocates. Where possible, the discussions and answers provide concrete answers to black letter legal issues. In other scenarios, the discussion is meant to go beyond the ROE and LOAC. These may prove to be the most valuable discussions. The ROE are generally permissive. The strategic implications of a single Soldier’s actions require very junior personnel to go beyond the ROE analysis of whether the use of force is authorized. The judge advocate needs to take that additional step as well. These vignettes provide the judge advocate the opportunity to assist Soldiers in problem solving rather than simply giving an answer.

In creating this compilation, the concept was to develop a resource for junior leaders to train their Soldiers wherever and whenever the opportunity arises. Thus, the product is created as a tool for squad-level “hip-pocket” training. Do not let this format prevent you from utilizing the vignettes in other ways. Judge advocate ROE training can often be frustrating for both the Soldier and the instructor. Judge advocates tend to think of the ROE in academic terms — definitions and rules. Soldiers tend to operationalize the materials (i.e., put the rules in terms of something that has happened or a set of facts they can visualize). In other terms, the judge advocate tends to think about the ROE in paragraphs. The Soldier wants to see it in high-definition color. These scenarios can work to bridge that gap for the judge advocate. The discussions and answers are based upon the legal opinions of the authors applying the ISAF ROE, U.S. Standing ROE, and the LOAC as of the publication of this edition. The judgment of the authors should not be substituted for that of another judge advocate. The passage of time will also affect the law and policy upon which the discussions and answers are based. That being said, these scenarios have been carefully researched and compiled. They should be an asset for Soldiers, leaders, and judge advocates.