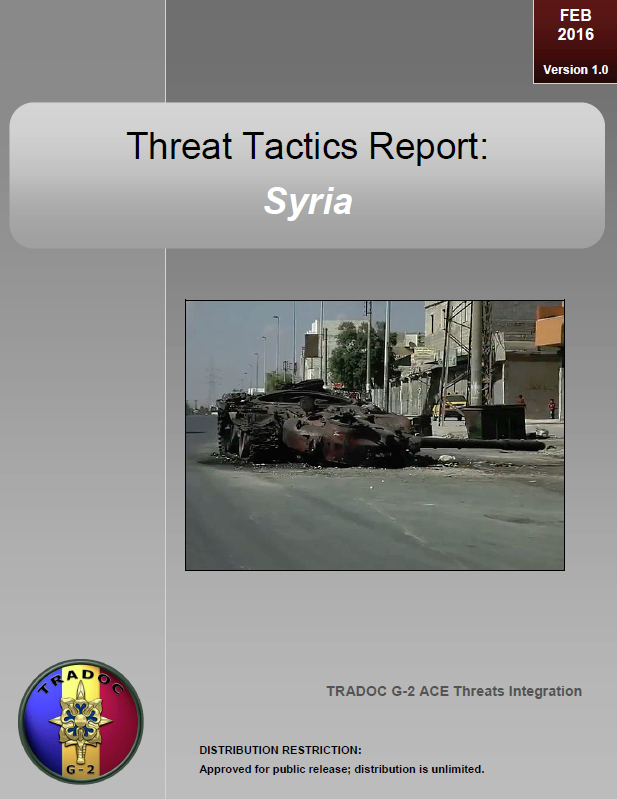 The Syrian military is a heavy mechanized force, primarily designed to defend against a similarly composed external foe. The heavily armored force is not optimized for the type of combat experienced in Syria’s civil war.

The Syrian military is greatly diminished due to desertions and combat losses and had to broaden its defense capabilities to include a number of hybrid threat actors while significantly adapting its tactics and techniques in order to maintain its ability to protect the regime of President Bashar al Assad.

The Syrian military relies on outside actors to help defend its government, namely Hezbollah and the governments of Iran and Russia for arms, strategy, and personnel.

The reported use of chemical weapons by the Syrian military against its citizens represents the Assad government’s willingness to ignore law of warfare principles in order to achieve its objectives, regardless of global opinion.

TRADOC G-2 ACE Threats Integration (ACE-TI) is the source of the Threat Tactics Report (TTR) series of products. TTRs serve to explain to the Army training community how an actor fights. Elements that contribute to this understanding may include an actor’s doctrine, force structure, weapons and equipment, education, and warfighting functions. There will be a discussion of the actor’s tactics and techniques, and recent examples of tactical actions will be described if they exist. An actor may be regular or irregular, and a TTR will have a discussion of what a particular actor’s capabilities mean to the US and its allies.

A TTR will also identify where the conditions specific to the actor are present in Decisive Action Training Environment (DATE) and other training materials so that these conditions can easily be implemented across all training venues.

This particular TTR will describe and assess the structure and capabilities of the Syrian military and its allies in the fight against Sunni opposition forces. Topics will include force structure, combat techniques, military capabilities, irregular forces, and unique capabilities. It is the intent to provide the reader with knowledge of the Syrian military strategy, tactics, and techniques in order to make informed decisions about how best to replicate these conditions in US Army training events using the tools and exercise design methods contained in ACE-TI’s materials and products. The scope of this Threat Tactics report (TTR) covers the Syrian military, included but not limited to regular forces (army, navy, air force, special purpose forces) and paramilitary organizations (Hezbollah, the national defense forces, other foreign militias, and criminal elements) as they relate to the capabilities of the Syrian military.

The Syrian military is dealing with the effects of a four-year long civil war. Once considered among the most capable in the Middle East, the Syrian military has lost much of its personnel to combat and desertion to antigovernment rebel groups and extremist organizations. Conscription is mandatory for all qualified males at age 18. Women are not required to join the Armed forces but some volunteer. The officer corps is ethnically diverse, however senior officers usually come from the more politically loyal Alawi and Druze populations. Membership in the dominant Ba’ath party is not a requirement but is necessary for advancement to higher positions.

The Syrian military has suffered from a wide variety of problems including command and control (C2) issues and sustainment and logistics issues due to mismanagement of soldier professional development and a challenging modernization effort. The vast majority of Syrian military equipment is Soviet-era /Russian design and its doctrine has historically reflected the Soviet model. Syria has traditionally been a heavy mechanized force consisting of approximately 19 mechanized infantry brigades and 22 tank brigades. In addition to the large heavy forces, there are approximately 11 regiments of special purpose forces. At the beginning of the current civil war the Syrian military was estimated to be between 220,000 and 250,000 soldiers. The other branches of the Syrian military, the navy and the air force, have an estimated 4,000 and 30,000 members respectively. All branches of the military place a premium on loyalty to the government of President Bashar al Assad; the most loyal units in the Syrian military usually receive the most modern weapons and are the best trained.

The Syrian navy is one of the smallest in the region. Due to this fact, there are no large naval units such as fleets or squadrons, instead each ship is considered a separate unit. The coastal defense has a naval infantry consisting of 350-500 troops and it is charged with protecting Syria’s 193 km coast. See the weapons and equipment section of this report for a list of relevant naval vessels.

The Syrian air force is one of the largest in the Middle East and is the Syrian government’s main advantage against the opposition. In 2007 it was estimated to have 584 fixed wing and 210 rotary wing aircraft. However, a lack of spare parts and maintenance for the mostly Russian fleet created a significant effect on the readiness of these aircraft, especially the attack helicopters and offensive fixed-wing aircraft. For this reason many pilots are using training aircraft to conduct combat missions. These aircraft perform a range of missions including attack/combat, reconnaissance, transport, and training. Most aircraft are from Russian and former Commonwealth of Independent States (CIS) countries. Syrian air force operations include deep strikes into enemy-held territory as well as support to Syrian army ground forces. The Syrian air force uses a variety of munitions including improvised bombs known as barrel bombs against rebel and civilian targets. An expeditionary force that attempts to intervene in the current crisis in Syria would need to control the Syrian air force prior to ground operations through either lethal attacks or a diplomatic agreement such as a no-fly zone. See the weapons and equipment section of this report for a list of relevant aircraft.