The following guide for countering violent extremism was released by the U.S. Attorney’s Office for the District of Massachusetts in February 2015. 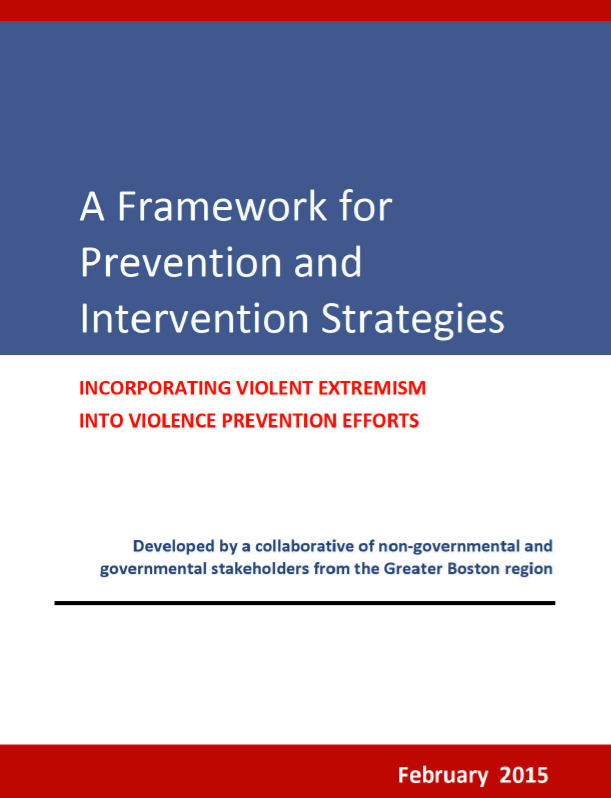 In March 2014, the White House National Security Council (NSC) requested assistance from three regions with piloting the development of a comprehensive framework that promotes multidisciplinary solutions to countering violent extremism. The Greater Boston region was selected because of its existing collaborative efforts and nationally recognized success with developing robust comprehensive violence prevention and intervention strategies. With the support of the Department of Justice, Federal Bureau of Investigation, Department of Homeland Security and National Counterterrorism Center, a range of stakeholders in the Greater Boston region began to develop a locally-driven framework. The U.S. Attorney’s Office for the District of Massachusetts has had a coordinating role in this process.

The locally-driven framework has been developed by a collaborative of non-governmental, governmental and academic stakeholders from the Greater Boston region. (See Appendix A) Contributions were made through in-person meetings, phone conversations, emails and other written correspondence. Working Group meetings were held on a regular basis to work through issues and craft an approach that can be customized based on the local needs.

WHO ARE VIOLENT EXTREMISTS

Violent extremists are individuals who support or commit ideologically-motivated violence to further personal, political or social objectives, sometimes without direction from or influence by a foreign actor. There are a number of violent extremist ideologies that are based in politics, religion or 1The Collaborative has included numerous City of Boston personnel who have provided guidance and expertise on best practices. The City of Boston has implemented many of the solutions contained in the framework, some through Boston’s National Forum on Youth Violence Prevention and Boston’s Defending Childhood Initiative. Reference: Federal Bureau of Investigation, Countering Violent Extremism Office, Washington, D.C. economics. The framework developed by the Collaborative in the Greater Boston region does not focus on any one form of violent extremism.

WHAT IS COUNTERING VIOLENT EXTREMISM

Countering Violent Extremism, also known as “CVE”, at the very basic level, focuses on using prevention and intervention approaches as a way to minimize the risk of individuals being inspired by violent extremist ideologies or recruited by violent extremist groups. In the Greater Boston region, Countering Violent Extremism efforts do not contain a law enforcement suppression component, which is aimed at protecting national security and developed and implemented by law enforcement agencies. Law enforcement suppression strategies fall under counterterrorism efforts and are focused on activities once an individual has begun to prepare for or engage in ideologically-motivated violence to advance their cause. (This distinction is important to understand.)

Through the initiative, the Collaborative has been working to clarify the meaning of Countering Violent Extremism and to identify language and initiatives that promote resilience, respect and partnership. Both governmental and nongovernmental collaborators have demonstrated a commitment to work through an inclusive process that will not polarize communities.

WHAT ARE THE FOCUS AREAS

The overall project goal identified by the Collaborative is to increase the capacity of community and government as a way to protect vulnerable individuals from engagement in and the nation from violent extremism. The Collaborative thoughtfully explored a variety of areas that have presented particular challenges with accomplishing the goal. The following areas were identified as problem areas:

PROBLEM ONE: Some young people may be at greater risk of feeling isolated and alienated, making them more vulnerable to recruitment by violent extremists.

PROBLEM THREE: Social media and other media platforms are being used to recruit individuals to join extremist groups and to encourage individuals to engage in violence.

PROBLEM FOUR: U.S. policy and events around the globe can frustrate, anger and, at times, influence some to think that there is no effective alternative other than to express grievances or solidarity through the use of violence.

PROBLEM SIX: Lack of knowledge in mainstream society regarding religions, cultures and thought systems which are unfamiliar or are maligned in the media contributes to poor perceptions that fuel and mutually reinforce fear and estrangement.

PROBLEM SEVEN: Individuals convicted of hate crimes and terrorism offenses require specialized support and services before and after release from prison.