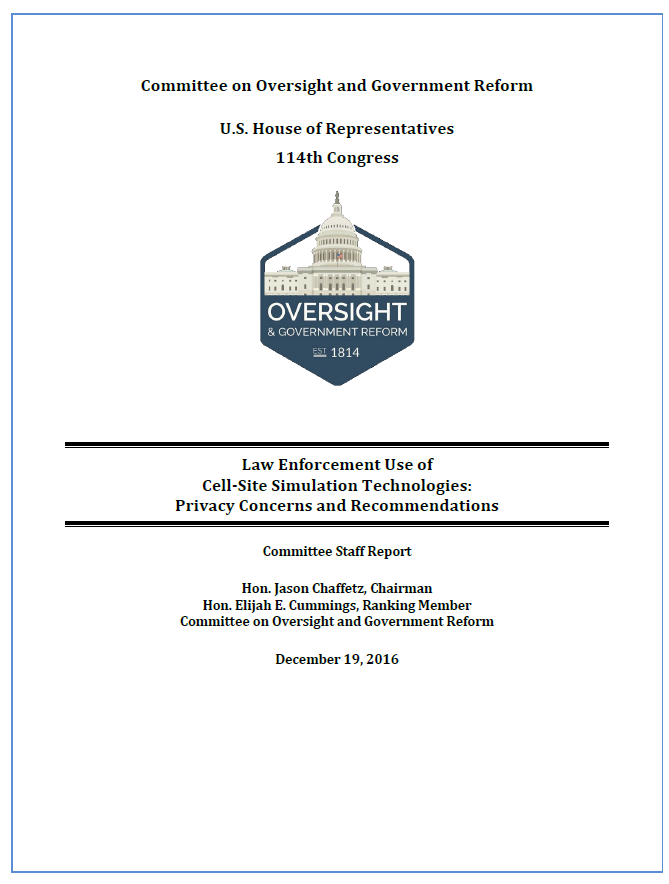 Advances in emerging surveillance technologies like cell-site simulators – devices which transform a cell phone into a real-time tracking device – require careful evaluation to ensure their use is consistent with the protections afforded under the First and Fourth Amendments to the U.S. Constitution.

The United States’ military and intelligence agencies have developed robust and sophisticated surveillance technologies for deployment in defense against threats from foreign actors. These technologies are essential to keeping America safe.

Increasingly though, domestic law enforcement at the federal, state, and local levels are using surveillance technologies in their every-day crime-fighting activities. In the case of cell-site simulators, this technology is being used to investigate a wide range of criminal activity, from human trafficking to narcotics trafficking, as well as kidnapping, and to assist in the apprehension of dangerous and violent fugitives.

Law enforcement officers at all levels perform an incredibly difficult and important job and deserve our thanks and appreciation. While law enforcement agencies should be able to utilize technology as a tool to help officers be safe and accomplish their missions, absent proper oversight and safeguards, the domestic use of cell-site simulators may well infringe upon the constitutional rights of citizens to be free from unreasonable searches and seizures, as well as the right to free association. Transparency and accountability are therefore critical to ensuring that when domestic law enforcement decide to use these devices on American citizens, the devices are used in a manner that meets the requirements and protections of the Constitution.

After press reports alleged wide-spread use of cell-site simulation devices by federal, state, and local law enforcement, the Committee initiated a bipartisan investigation in April 2015. At the outset of the investigation, the use of these devices by federal, state, and local law enforcement agencies was not well known, and in many instances, appeared to be shrouded in secrecy. This is partly due to the use of the technology by military and intelligence agencies and the need for sensitivity in national security matters. The Federal Bureau of Investigation (FBI), for example, avoided disclosing not only its own use of the devices, but also its role in assisting state and local law enforcement agencies in obtaining and deploying these devices. Indeed, the Committee’s investigation revealed that as part of the conditions for being able to sell cell-site simulators to state and local law enforcement, the manufacturers of these devices must first notify the FBI, and those agencies in turn must sign a non-disclosure agreement with the FBI that expressly prohibits them from publicly disclosing their use of this technology, even in prosecutions where the use of the technology was at issue.