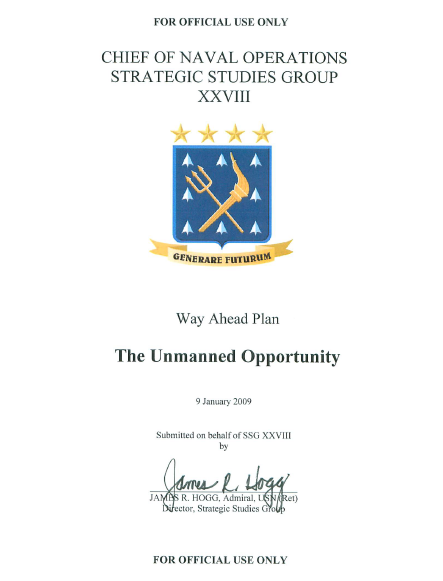 The Chief of Naval Operations (CNO) Strategic Studies Group (SSG) is chartered with generating revolutionary naval warfighting concepts. SSG XXVIII has been tasked to generate innovative concepts for the operational and tactical employment of unmanned systems, in all domains, as an integral part of the Naval Force for 2020 and beyond. From these innovative concepts, SSG XXVIII is also tasked to produce recommendations and actionable steps for implementation of unmanned systems integration into the Navy’s force structure. This Way Ahead Plan provides a framework for SSG XXVIII’s approach to address this task and challenge. It includes a summary of the SSG’s preliminary thoughts on the value of unmanned systems, an initial overarching concept, and associated concept teams and areas of interest.

Holistic Approach Could Increase Effectiveness. Incremental projections of today’s successes do not look sufficiently far into the future, may not scale effectively across the force, and may fail to realize the maximum benefits that a holistic implementation of unmanned systems could produce. Simply adding unmanned systems without examination of restructuring Navy forces may miss unseen opportunities of unmanned systems such as realization of a free form force and enhanced development of distributed, flexible, and agile forces employed in yet undiscovered operational ways and means.

Balancing Risks and Rewards. Uncertainty over both the exact capacities of future unmanned systems and the challenges of specific future threats complicates the integration of the former. A mismatch between future capabilities and challenges represents risk to both the Navy and the nation. Unmanned systems are one portion of the overall future capability of the Navy. Ad hoc procurement of more unmanned vehicles, devoid of an overall concept of their use in the context of the entire naval force and the uncertain threat environment, will increase that risk. A concept of unmanned systems usage must address a variety of possible futures in order to utilize unmanned assets in a way that maximizes rewards and best mitigates risk.

What do we want to “Unman?” Unmanned systems are often described as being more capable, cheaper, less risky, and less manpower intensive than manned systems. While these perceptions may be true, further study in a broader context is required to determine the validity of these points. Examination of unmanned attributes and their projected futures will provide better metrics to establish what roles are best unmanned. The SSG will analyze potential capabilities and benefits of unmanned systems contribution to total Navy capabilities across a range of alternate futures while seeking concepts that add the most value and reduce risk amidst uncertainty.

Unmanned integration recommendations are not new. Since 1995, several SSGs have included elements of unmanned systems in their reports. SSGs XXIV and XXV provided detailed information on what came to be called the “Free Form Force.” Uniquely, this force was scalable, adaptable and relied heavily on unmanned vehicles of several types and sizes that operated on and under the sea, and in the air. SSG XIX introduced the concept of FORCEnet, an operational, netted architecture which provided the necessary battlespace in which the Free Form Force could most effectively operate. SSGs XXVI and XXVII focused on cyberspace and the Navy’s role in that environment. SSG XXVIII believes that the work of these previous SSGs is highly germane to this year’s topic, and that an operational concept for full integration of the work of these earlier SSGs may be furthered in our work this year.

Our Overarching Concept—The Unmanned Opportunity— provides a preliminary operational framework for the year’s work. It is not intended to be exhaustive, and will evolve with continuing research.

To provide a common frame of reference, SSG XXVIII’s Overarching Concept is built upon specific terminology to clearly communicate our early thoughts providing an initial construct for us to begin our work. Specifically, we have chosen not to use the terms “systems” or “system of systems” when describing unmanned and manned entities. We have found that the more diverse the audience, the wider the range of definitions for these terms which leads to confusion. We have found, in common usage, that “systems” and “system of systems” can mean anything from small-scale to large-scale, varying across logistical support, training, hardware, networking, and specific sensors. Rather than using “systems” and “systems of systems,” we have decided to use “entity” and “naval force package” in our initial Overarching Concept:

– Entity – The lowest divisible level/element of a taskable unmanned or manned unit (e.g. a vehicle, sensor, weapon, or cyber element). This definition assumes the support structure behind each entity exists when it is designed. An entity may operate individually or be grouped together with other similar or dissimilar entities to fulfill capability requirements.

– Naval Force Package – An operationally and logistically integrated combination of entity groupings (from one to many) containing the command and control for these groupings, the organic logistics and sustainment structure supporting the grouping, and the pool from which the entity groupings are constituted. The package generates operational effects through coordinated use of the entity groupings, and is provided to the Joint Commander to fulfill a mission or set of missions. The Naval Force Package is a sub-component of a larger Joint/Coalition/Interagency force.

The Unmanned Opportunity. In order to position the Navy to best meet the dynamic range of challenges that will emerge over the next 12 to 20 years, SSG XXVIII proposes that manned and unmanned force structure merge in a cohesive and seamless fashion. The work of SSG XXVIII during the remainder of our year will test the eight hypotheses laid out in this Overarching Concept:

The Navy must adapt to evolving missions sets. Maximizing naval mission effectiveness will require the integration of manned and unmanned entities in all domains (land, sea, air, space, and cyberspace). This integration will also provide new opportunities for mission accomplishment that will revolutionize concepts of operations and related doctrine, and may render some current missions, systems and approaches obsolete.

Integrated and netted manned-unmanned force structure will be a force multiplier. A mission-tasked Naval Force Package, comprised of heterogeneous groups of manned and unmanned entities—fully deconflicted throughout the battlespace—will provide a more robust capability to the Joint Commander.

Realizing Free Form Operations. Integrated Naval Force Packages will be responsive and adaptable to changes in mission, tasking and environment. Manned and unmanned entities should be able to be tasked and employed with equal ease. Resilience will be a centerpiece principle of the integrated force. Naval Force Packages will accomplish the mission or some portions of it despite losses, adversary action or uncertainty, through attributes including self-healing and graceful degradation. Survivable networks and exchange of information will be vital to success.

Networked together to increase strength, survivability, and reach, entities cannot be considered just in isolation, but also as part of an integrated Naval Force Package. The challenges are not simple and organizational bias runs deep. Given that the Navy’s current institutional structure has not yet truly integrated manned and unmanned entities into a coherent framework, true integration will likely involve cultural, doctrinal, personnel, and organizational revolutions.

Lead the technology race. Complete integration of unmanned entities into Naval Force Packages will present technological challenges. Integration implies the need for development of new innovative technologies, expeditious merging and collaborating of current and emerging technology, and the evaluation of associated technological risks.