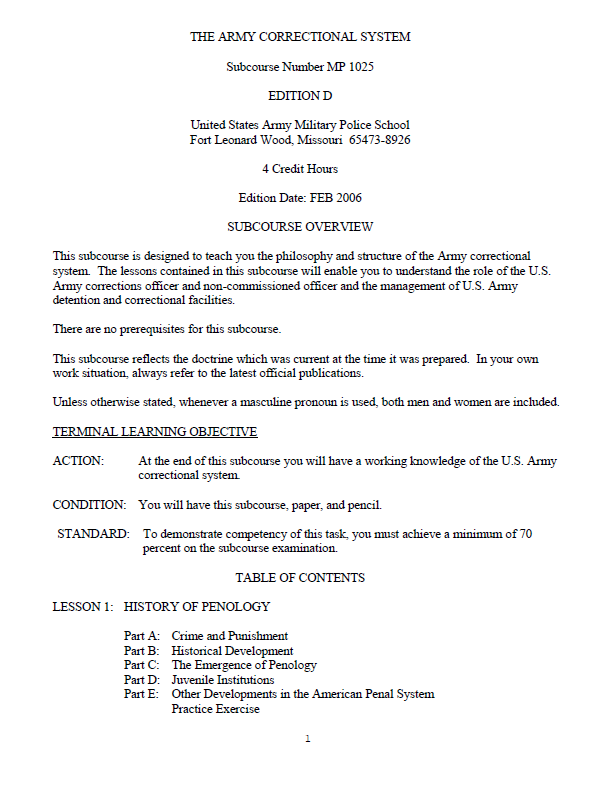 3. The mission of the Army correctional program is to provide for the custody and correctional treatment of military prisoners pursuant to law and regulation. At first thought, our mission, as stated in the preceding sentence, is basically a simple proposition. But further reflection shows us the apparently simple sentence is really a complex statement. There are three key words or phrases in this sentence: custody, correctional treatment, and pursuant to law and regulation. To understand our mission, we must understand all parts.

4. For many people, including a few within the correctional program, custody is the only facet of the program. They believe offenders should be locked up away from the public and serve their sentence. They feel they are successful if they keep prisoners confined and prevent their escape. They are missing one key point. If a prisoner is released who, in actions and thought, is the same person confined, then nothing has been done for the person. The prisoner was only confined; not rehabilitated. However, before feeling that custody is not important, it must be remembered that custody is the key to successful corrections. For, if the person in not able to be kept in confinement, then rehabilitation will not be able to work. A person is confined by the courts, and confinement must be carried out. But, maintaining successful custody should not be the only satisfaction. The other parts of our mission: correctional treatment pursuant to law and regulation must also be strived for.

5. A follow up to successful custody is correctional treatment. Such treatment is the discovery of causes of criminal behavior through professional evaluation and study of the individual. It is also the application of corrective measures to eliminate conditions that contributed to the behavior and to improve the individual’s capability and motivation for useful, law-abiding citizenship. Successful correctional treatment requires the prisoner to realize that he has committed a wrong act and, through his own efforts with the aid of correctional treatment, that he can correct or redirect his behavior so he can assume his duty as a useful Soldier. The prisoner must understand his personal problems, the causes of behavior resulting in his confinement, the necessity for changing his attitudes, and the need for directing his efforts to conform to the requirements of the service. These goals must be attained through professional evaluation, counseling, training, useful employment, and welfare activities. Particular emphasis will be given to helping prisoners solve their problems and develop improved attitudes. Correctional treatment is based on the premise that all individuals are worthwhile and that their dignity as individuals must be respected.

6. The third key part of our mission statement is the phrase, pursuant to law and regulation. Never forget one basic truth. The military police and their efforts are always to support and respect the laws. They do not determine the innocence or guilt of persons placed in their charge. That is the responsibility of the courts. The job of the military police is to work with the legally confined persons and do all that can be done to change the attitudes and behavior of the prisoners. Military police do not administer on the spot justice; the courts do that. Military police will never be able to teach prisoners to obey and respect the law if they, themselves, violate these same laws in dealing with offenders. Correction regulations are not written to limit activities, but to assist in the performance of duties.

7. At first thought, the purpose of confinement seems simple: to keep a person locked up for a specified period of time because the court has ordered it. But, if correctional treatment is to be carried out, confinements has three valid purposes—maintain custody, reduce delinquency through problem solving, and acculturate prisoners.

8. The first purpose is to keep prisoners in custody. The laws and courts deprive persons of their freedom for committing certain offenses. This loss of freedom is the punishment for committing these offenses. But if this confinement is to serve any useful purpose, much more must be accomplished than merely locking them up. The time spent in custody must be used in helping them become productive citizens.

9. The second purpose is to reduce delinquency through problem solving. When saying the word delinquent, it is not speaking of just the youthful offender, but any person who neglects or violates duty or law. Delinquency is normally brought about by problems and misguided efforts to solve or overcome these problems. The most common offense in the Army is AWOL. Yet very few men go AWOL just for the pleasure of it. Almost always the cause of AWOL is some problem that the man feels he can solve by running away from the army or by going to the source of the problem. The same is true of other offenses. Few people commit crimes for pleasure; mainly, they seek ways to overcome problems. If no effort is made to help a prisoner solve his problems while in confinement, then the same person confined is released. If these problems caused the original delinquency, then there is little chance of reducing the delinquency while the problems exist.

10. After the problem-solving process is initiated, the third purpose appears. This is to acculturate the prisoner to the society to which he will return, whether it is in a military or civilian society. By the word acculturate, it is meant to cause change in the prisoner by providing exposure to the traits, beliefs, and knowledge of our society, hopefully resulting in the prisoner acquiring new and blended social patterns. Too many times comments of model prisoners are heard. The purpose is not to have the person adjust or change to the prison environment, but to prepare the prisoner to reenter society. The harsh regimentation of an earlier era literally destroyed a man’s spirit, and upon release, the prisoner just could not fit into the responsibilities and standard of conduct of society. The final purpose then is not to produce model prisoners, but to turn out well-motivated Soldiers and citizens. All the efforts of correctional officers should be to help prisoners prepare to reenter military service or civilian life.

11. AR 190-47 prescribes rather precise policies for operation and management of correctional facilities. These policies can be summed up by the following five paragraphs.

a. Army confinement facilities will be operated and administered on a corrective rather than punitive basis. It is intended that every phase from reception to confinement be directed to the correction of the offender. This includes administering disciplinary measures for violations of established rules. In short, military prisoners will be treated in accordance with their individual needs with a view toward solving their problems and changing their behavior.

b. Military places of confinement will be administered on a uniform basis. This policy provides for uniformity so that when a prisoner is transferred from one facility to another, he will not require a lengthy period of adjustment. In addition, a correctional officer will be qualified by his confinement experience and training to function as a facility commander in any type of facility.

c. Military prisoners will not be subjected to any form of punishment while confined, except as specifically provided by law, regulation, and contained in the UCMJ. It is often necessary to impose restrictions upon a recalcitrant person, but if this is done beyond approved measures, it ceases to be constructive and becomes counterproductive.

e. Internment Resettlement Specialist and all other personnel assigned to operate and administer facilities will be selected IAW uniform criteria as established in applicable regulations. They will be specifically trained in procedures and techniques concerning leadership. Assuming such duties, they will be fully oriented to ensure complete understanding of the mission, objectives, and policies established by all applicable regulations. The purpose of this is to ensure that personnel assigned to confinement and correctional duties are well trained in all requisite elements of their jobs.

13. All behavior has a purpose and a history. No one ever commits an act, criminal or not, just for the sake of it or for no reason at all. One eats to satisfy hunger. One works or steals to satisfy the need for money. Virtually every act one performs, major or minor, has a purpose. By observing a person’s behavior, it is possible to achieve an understanding of the needs and perhaps problems. A person’s behavior is a reflection of his attitudes and beliefs. A big help to those working in corrections is not only the knowledge that behavior has a purpose, but also that, in most cases, behavior repeats itself or has a history. We have found by studies that the man who enters the Army with a history of problems with authority, perhaps reflected by a police arrest record, will probably continue to have these same problems. The person who habitually runs away from problems will probably continue this pattern, perhaps by going AWOL. But on the positive side, a man who enters the Army with a history of abiding within the standards and laws of civilian life will, in all probability, serve in an honorable manner and never be found in a confinement and correctional facility.

14. Another basic belief is that each person is the result of his total life’s experience. Life in itself is a learning experience, and a person’s attitudes, goals, and behavior are influenced by what he experiences in life and the environment in which he lives. The inner city resident does not think or act like the mid-western farmer, not because of a difference in intelligence, but because of a difference in experience. The inner city resident lives in an environment characterized by low income and poor living, and beliefs are shaped by his experiences. This fact is not important to a correctional officer’s standards, but attempts should be made to understand how the prisoner will act under the circumstances.

15. Individuals have the capacity to change. This belief, coupled with those in the previous paragraph, is the basis for the entire correctional program. Even if the belief that a person can change is not accepted, one must accept the world experiences undergone in one’s own life. Some of these experiences may have been education, marriage, religion, financial hardship, military service, or perhaps military combat duty. Each of these experiences can influence and in all probability, changed one’s outlook on life. This same philosophy should be applied to corrections. The time a prisoner spends in confinement should not be just a period of punishment, or loss of freedom, but a time in which positive influences can assist the prisoner in changing or modifying his attitudes, thereby changing or modifying his behavior.