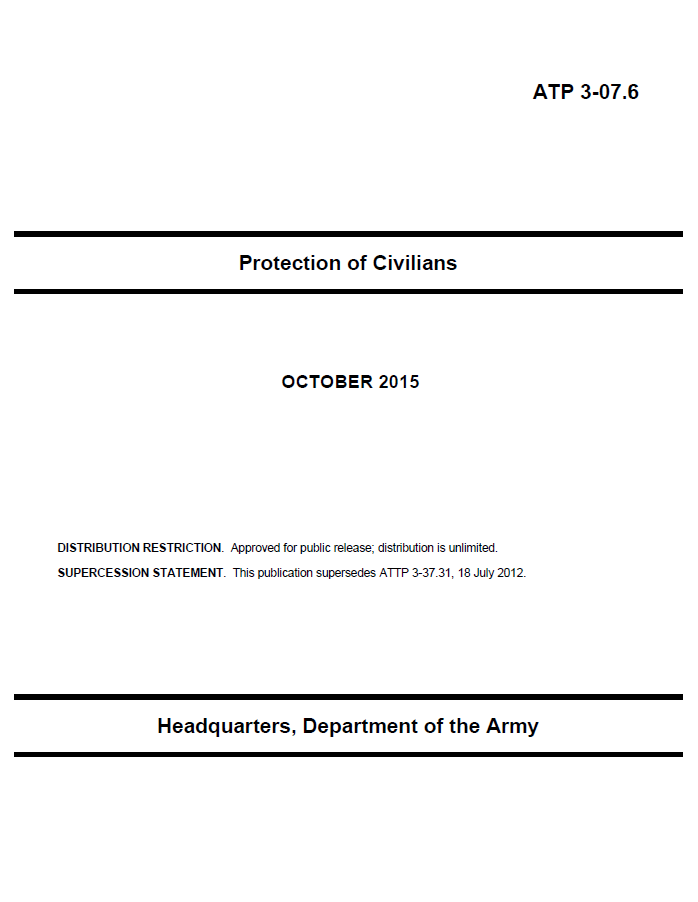 As Army Professionals, we are servants of the Nation, morally committed by Oath to support and defend the Constitution. This Duty depends on Trust with the American people, reinforced through Military Expertise, Honorable Service, Esprit de Corps, and Stewardship. Within the Army Profession, we earn and sustain Trust by demonstrating our Character, Competence, and Commitment—making decisions and taking actions that are ethical, effective, and efficient. As Stewards of the Army Profession, we provide coaching, counseling, and mentoring while properly managing the Army’s resources entrusted to our care.

ATP 3-07.6 discusses the importance of civilian protection during unified land operations and presents guidelines for Army units that must consider the protection of civilians during their operations. Protection of civilians refers to efforts to protect civilians from physical violence, secure their rights to access essential services and resources, and contribute to a secure, stable, and just environment for civilians over the long-term. ATP 3-07.6 describes different considerations including civilian casualty mitigation and mass atrocity response operations. 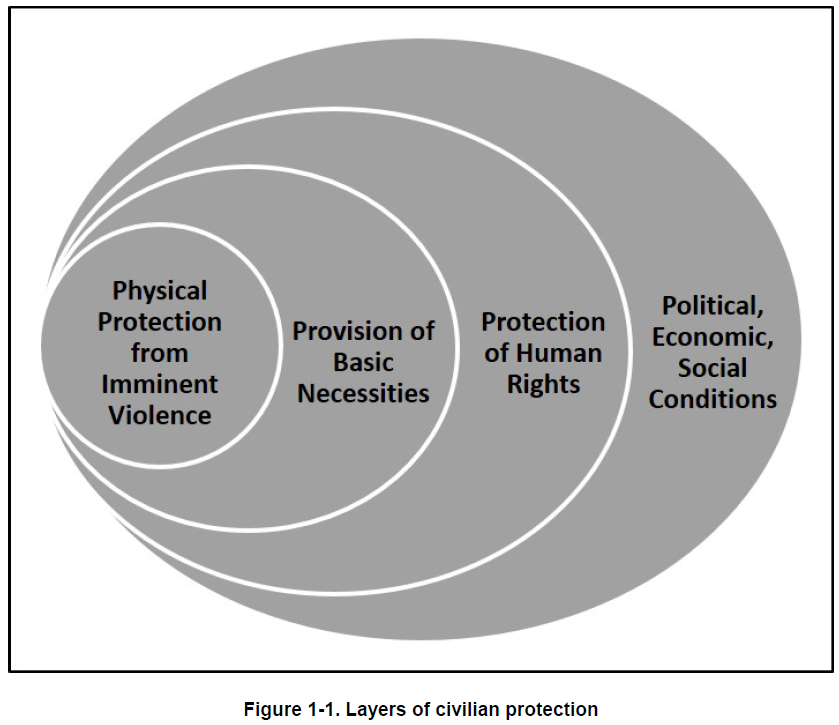 2-8. All combatants are obliged to abide by the law of war whether or not they are signatories to relevant international agreements and treaties. Combatants should perform their operations according to the law of war principles of military necessity (actions must fulfill a legitimate military objective), distinction (actions target combatants and not civilians), proportionality (actions must not cause excessive incidental civilian harm in relation to the anticipated military advantage to be gained), and humanity (actions must not use means that cause unnecessary suffering). Nevertheless, civilians are often deliberately targeted and are also at great risk from collateral damage during military operations, particularly when some combatants are irregular elements that are indistinguishable from civilians. Civilians are also in jeopardy when combatants of any type are located among them. This includes the intentional and forcible use of civilians as auxiliaries, human shields, or hostages to dissuade attacks by enemies.

2-9. In many situations civilians are at risk because, through choice or compulsion, they are supporting or located with a party to the conflict. Examples of such at-risk civilians include camp followers, sex slaves, family members, contractors, workers, and crews of merchant marine vessels. Other civilians, such as humanitarian assistance workers, can also be at risk due to a perception that they may be directly or indirectly supporting a party to a conflict, or because enemies view them as vulnerable and convenient targets. While protected under the law of war, humanitarian workers could find themselves inadvertently or deliberately targeted because of their activities or locations. For more information regarding security of government contractors (authorized and unauthorized) and Department of Defense civilians, see JP 3-10 and JP 4-10.

2-10. Civilians may also be in jeopardy immediately after combat situations or in post-conflict settings. Damaged infrastructure, fires, flooding, destruction of crops, disease, landmines and other unexploded ordnance, societal disruption, and other factors can result in long-term civilian suffering after hostilities have stopped.

2-11. A mass atrocity refers to widespread and often systematic acts of violence against civilians by state or non-state armed groups, including killing, causing serious bodily or mental harm, or deliberately inflicting serious bodily or mental harm. Genocide is a form of mass atrocity and refers to acts committed to destroy a national, ethnic, racial, or religious group. Ethnic cleansing is similar in nature, but is intended to force a group to leave an area. Civilians are often deliberately targeted to inflict terror, reduce popular will to continue a struggle, punish an adversary, deter or compel civilian behavior, or achieve other objectives. Widespread targeting occurs in other situations such as reprisals against civilians during a guerrilla or counterinsurgency campaign. A crime against humanity is an extremely brutal act committed on any scale, such as systematic rape or some human rights violations such as torture. It may be difficult to distinguish mass atrocity situations from other circumstances such as political violence, massacres, or large-scale violations of human rights, particularly during the early stages of a conflict or when low levels of violence have been occurring for an extended period of time. Civilians can also be vulnerable to perpetrators who are less systematic or who do not have underlying political or strategic objectives. Protecting civilians from such targeting is an important supporting task of unified land operations, and it could be the primary objective of an operation.

2-13. Human trafficking such as slavery, prostitution, and theft of body organs frequently occurs in fragile states and post-conflict situations due to the widespread poverty and limited rule of law. These activities are often controlled by organized criminal groups with transnational ties and linkages to those in official, legitimate, and respectable positions. It should be a topic of emphasis when interacting with host-nation leaders, especially those in security forces. Army units tasked with broader stabilization responsibilities should know the possibility of human trafficking and criminal networks exist and address these issues aggressively. This is an area where it is important for Army units to create a secure environment in which the host-nation police and other rule-of-law organizations operate.