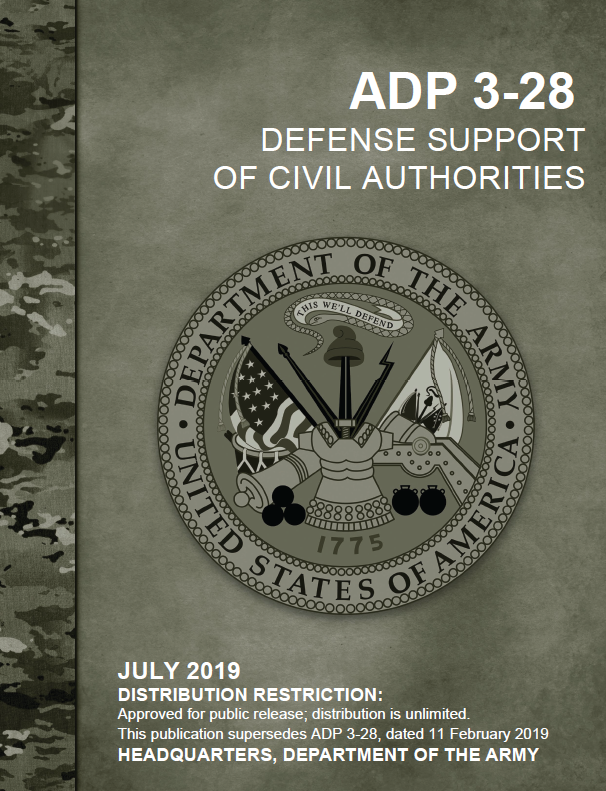 ADP 3-28 clarifies similarities and differences between defense support of civil authorities (DSCA) and other elements of decisive action. DSCA and stability operations are similar in many ways. Both revolve around helping partners on the ground within areas of operations. Both require Army forces to provide essential services and work together with civil authorities. However, homeland operational environments differ from those overseas in terms of law, military chain of command, use of force, and inter-organizational coordination among unified action partners. This ADP helps Army leaders understand how operations in the homeland differ from operations by forces deployed forward in other theaters. It illustrates how domestic operational areas are theaters of operations with special requirements. Moreover, this ADP recognizes that DSCA is a joint mission that supports the national homeland security enterprise. The Department of Defense conducts DSCA under civilian control, based on U.S. law and national policy, and in cooperation with numerous civilian partners. National policy, in this context, often uses the word joint to include all cooperating partners, as in a joint field office led by civil authorities. See Introductory Figure, on page viii.

The utilization of military forces during periods of domestic emergency is not undertaken lightly. The military however brings with it unique abilities, in terms of both capability and capacity which provide respondents with the resources needed to respond to an incident. The use of military forces in the responses to hurricanes Andrew in 1992 and Katrina in 2005 illustrate some of the different responses the U.S. military can provide. They also led the government to realize that additional coordination was required before an incident to ensure a successful response. An in-depth look at the tenets of DSCA, authorities, and the national preparedness system framework are discussed in chapter one.

The support the Army provides to civil authorities falls into four main tasks: Provide support for domestic disasters, provide support for domestic chemical, biological, radiological, and nuclear incidents, provide support for domestic civilian law enforcement agencies, and provide other designated support. Due to legal limitations such as the Posse Comitatus Act, the purpose for which the military can respond to these incidents is constrained, allowing a military response only to; save lives, restore essential services, maintain or restore law and order, protect infrastructure and property, support maintenance or restoration of local government, or shape the environment for intergovernmental success. Both state and federal laws detail how support is requested, provided and limited in both scope and duration. Further information on the employment of military forces and legal restrictions on doing so are provided in chapter two. 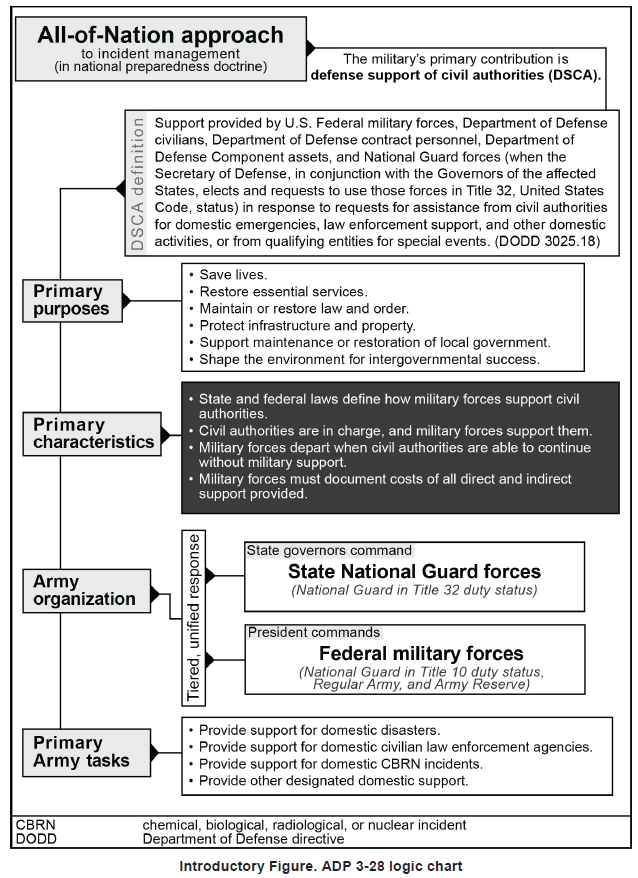 1-78. Isolation refers to the separation and the restriction of movement of people who have an infectious illness from healthy people to stop the spread of that illness. Quarantine refers to the separation and restriction of movement of people who are not yet ill but have been exposed to an infectious agent and are therefore potentially infectious. A geographical quarantine, known as a cordon sanitaire, is a sanitary barrier erected around an area. Both isolation and quarantine may be conducted on a voluntary basis or compelled on a mandatory basis through legal authority.

1-79. The federal government has the authority to prevent the spread of disease into the United States (foreign) or between states and territories (interstate). The Department of Health and Human Services is the lead federal agency for isolation and quarantine. The Centers for Disease Control and Prevention determine and enforce any federal government measures to prevent the spread of disease.

1-80. Only one federal statute permits federal military forces to enforce quarantine laws, under very narrow circumstances. Section 97 of Title 42, USC, allows military commanders of any coastal fort or station to support the execution of state quarantines with respect to vessels arriving in or bound for the United States. 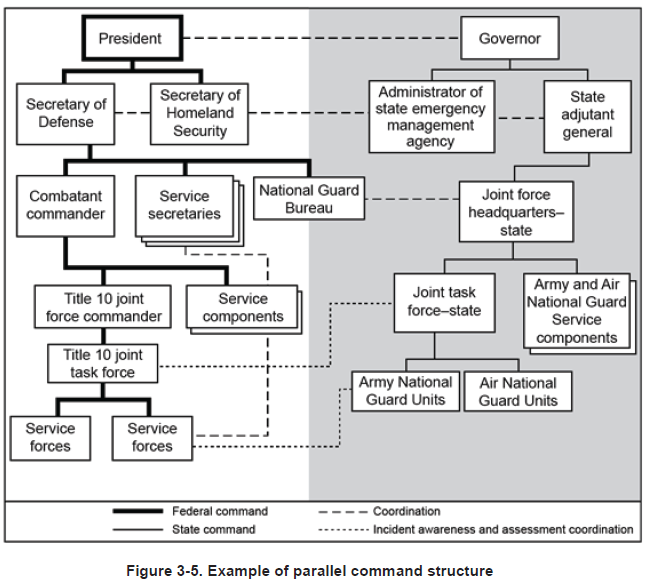 4-173. A request for direct federal military support to civil disturbance operations is unlikely except in an extreme emergency. (See chapter 2 for a discussion of legal considerations. See DODI 3025.21 regarding DOD responsibilities for civil disturbance.) Federal military support for civil disturbances does not fall under defense support of civilian law enforcement agencies when the Insurrection Act or other exemptions to the Posse Comitatus Act are used. The President may employ the Armed Forces of the United States, including the National Guard, within the United States to restore order or enforce federal law when requested by the state legislature, or when not in session, by the governor, and when the authorities of the state are incapable of controlling the situation. The Attorney General of the United States appoints a senior civilian representative as his or her action agent. Federal military personnel supporting civil disturbance operations remain under military command at all times. Forces deployed to help federal or local authorities in a civil disturbance adhere to the SRUF and RUF approved by the combatant commander.

4-175. Civil disturbance missions require unit training prior to employing crowd control tactics. This normally requires a mobile training team from the military police or trained law enforcement personnel. Even in an urgent situation, commanders need to drill their forces repeatedly until small unit leaders can execute maneuvers under extreme stress. Training should include all arms, emphasizing treatment and evacuation procedures, detention and movement of citizens, and use of authorized nonlethal systems.

4-177. State National Guard forces in either Title 32, USC status or state active duty status from another state operating under the EMAC or a memorandum of agreement between the states may only support civilian law enforcement as specified in a memorandum approved by both governors.

4-180. State National Guard forces frequently support civilian law enforcement agencies during disaster response. The disruption and confusion associated with a disaster typically cause numerous problems with law enforcement tasks. Commanders should evaluate the potential for law enforcement support as part of their unit’s initial assessment and provide their assessment to their state joint task force headquarters. Commanders must impress upon their subordinates that they must refrain from law enforcement activities except as authorized.