The following U.S. Army Doctrine Publication was released in July 2012. 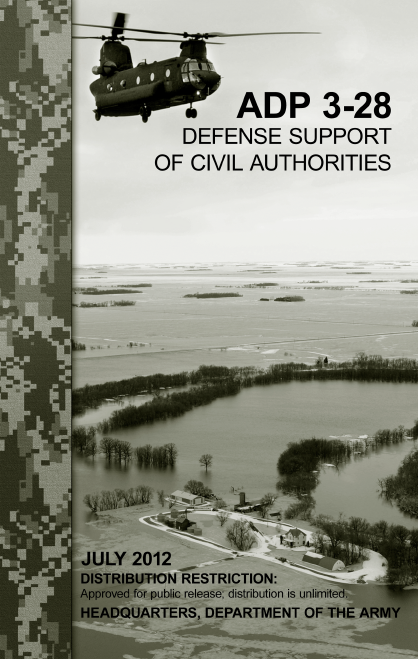 6. Army forces support civil authorities by performing defense support of civil authorities tasks. Defense support of civil authorities is defined as support provided by United States Federal military forces, DoD [Department of Defense] civilians, DoD contract personnel, DoD component assets, and National Guard forces (when the Secretary of Defense, in coordination with the Governors of the States, elects and requests to use those forces in title 32, United States Code, status) in response to requests for assistance from civil authorities for domestic emergencies, law enforcement support, and other domestic activities, or from qualifying entities for special events. Also known as civil support (DODD 3025.18).

8. Numerous features of DSCA are distinct from the other tasks of decisive action—offense, defense, and stability. DSCA tasks stress the employment of nondestructive means to save lives, alleviate suffering, and protect property. Domestic operations are operations in the homeland: The physical region that includes the continental United States, Alaska, Hawaii, United States possessions and territories, and surrounding territorial waters and airspace (JP 3-28). Domestic operations are constrained by various laws to a greater degree, in comparison to the Law of Land Warfare and The Hague and Geneva Conventions. It is accurate to say that most tasks performed in domestic support are common to overseas operations; however, Soldiers conduct them under very different conditions.

9. Commanders gauge unit readiness for DSCA missions by assessing proficiency in three warfighting functions: mission command, sustainment, and protection. The requirement to deploy into a domestic operational environment—often with little warning—and to operate with joint and interagency partners requires mission command that can adapt systems and procedures for a noncombat, civilian-led structure.

10. The majority of DSCA missions will stress the sustainment warfighting function. Mission success depends on units’ ability to deliver personnel, medical support, supplies, and equipment, while maintaining their equipment and Soldiers. This is challenging because forces often provide support in areas devastated by a disaster and lacking potable water, electrical power, and sanitation. When needed, a federal installation identified as a base support installation will serve as a base for federal military forces throughout the mission.

11. The protection warfighting function is the third area for readiness assessment. It is imperative that commanders understand their protection capabilities. They must understand which of those capabilities may be exercised legally in domestic environments so they can be properly integrated into the overall scheme of protection.

12. Soldiers are trained to exercise initiative in combat and training. They must understand which military capabilities may be exercised during domestic operations, including consideration for duty status (title 10, title 32, or state active duty). With this understanding, they will be able to maximize their initiative and efforts. Commanders maintain a balance between the willingness of their subordinates to engage any mission against the capability to accomplish it. Military capability comprises—

13. While there are many potential missions for Soldiers as part of DSCA, the overarching purposes of all DSCA missions are, in the following order, to—

Some DSCA missions may accomplish these purposes directly. An aircraft crew participating in a search and rescue operation is there to save lives. Soldiers fighting fires in a national forest are guarding public property, as are the National Guard Soldiers patrolling streets in the aftermath of a tornado. Some DSCA missions accomplish these purposes indirectly. Soldiers and civilians helping load medical supplies for shipment from an installation to a municipal shelter will not meet the people housed there, but their actions will help reduce the distress of their fellow citizens. In the absence of orders, or in uncertain and chaotic situations, each Soldier governs his or her actions based on these three purposes.

14. Army forces operating within the United States encounter very different operational environments than they face outside the Nation’s boundaries. Although many of the small-unit tasks remain the same, there are important differences in the conditions associated with them. Principally, the roles of civilian organizations and the relationship of military forces to federal, state, tribal, and local agencies are different. The differences are pronounced enough to define a different task set than offense, defense, or stability. The support provided by Army forces depends on specific circumstances dictated by law. Soldiers and Army civilians need to understand domestic environments so they can employ the Army’s capabilities efficiently, effectively, and legally.

15. While every domestic support mission is unique, four defining characteristics shape the actions of commanders and leaders in any mission. These characteristics are that—

44. Except as expressly authorized by the Constitution of the United States or by another act of Congress, the Posse Comitatus Act prohibits the use of the Active Army, Air Force, and—through DODD 5525.5—the Marine Corps and Navy as enforcement officials to execute state or federal law and perform direct law enforcement functions. However, the Posse Comitatus Act does not apply to state National Guard forces in state active duty status and title 32 status. Nor does the Posse Comitatus Act restrict the Coast Guard, even when under the operational control of the Navy, since the Coast Guard has inherent law enforcement powers under title 14, USC. Intelligence activities during DSCA should be coordinated through higher headquarters for approval, in addition to consultation from a staff judge advocate. Additionally, Executive Order 12333 provides guidelines for the use of military intelligence, including permitted and prohibited activities during DSCA operations.

45. Law enforcement support falls into two broad categories: direct and indirect support. Direct support involves enforcing the law and engaging in physical contact with offenders. Indirect support consists of aid to law enforcement agencies but not enforcement of the law or direct contact with offenders. Federal laws, presidential directives, and Department of Defense policy restrict the use of federal military forces from enforcing laws and providing security except on military installations. These laws, policies, and directives carefully specify exceptions to the restrictions. When authorized by the Secretary of Defense, federal military forces may provide indirect support to law enforcement agencies, but support is limited to logistical, transportation, and training assistance except when emergency authority applies. State and territorial governors can use state National Guard forces for direct support of civilian law enforcement; however, such use is a temporary expedient and must be in accordance with state laws. 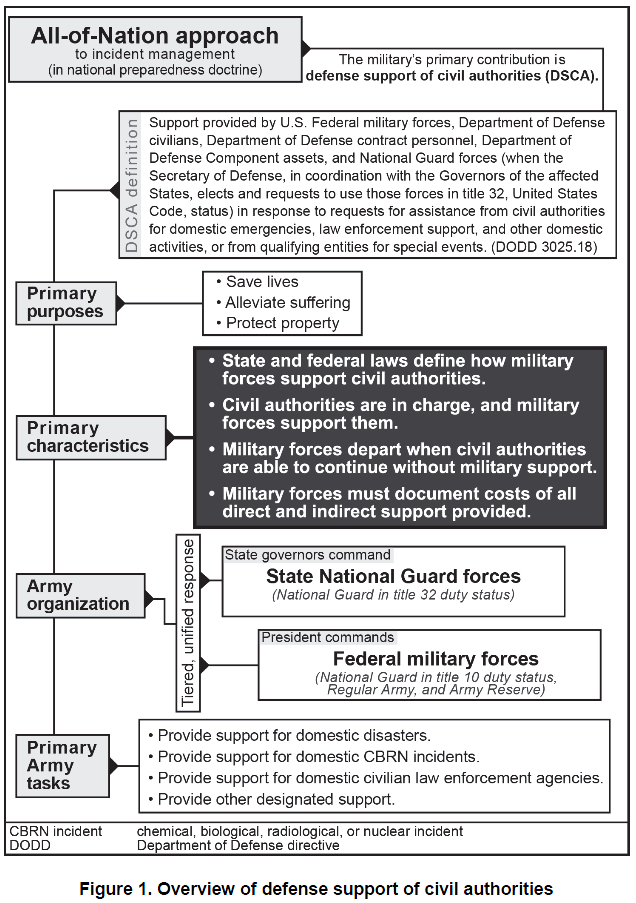