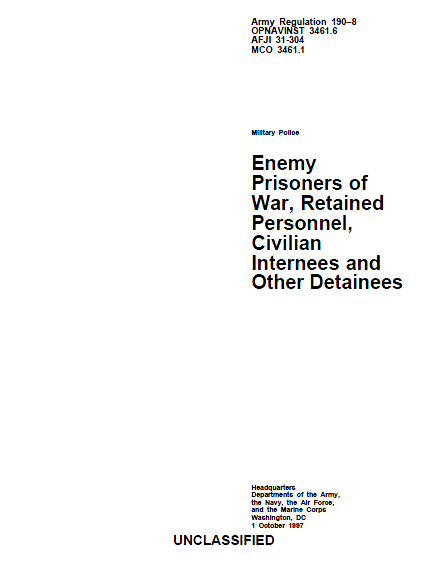 a. This regulation provides policy, procedures, and responsibilities for the administration, treatment, employment, and compensation of enemy prisoners of war (EPW), retained personnel (RP), civilian internees (CI) and other detainees (OD) in the custody of U.S. Armed Forces. This regulation also establishes procedures for transfer of custody from the United States to another detaining power.

b. This regulation implements international law, both customary and codified, relating to EPW, RP, CI, and ODs which includes those persons held during military operations other than war. The principal treaties relevant to this regulation are:

(1) The 1949 Geneva Convention Relative to the Amelioration of the Condition of the Wounded and Sick in Armed Forces in the Field (GWS).

(2) The 1949 Geneva Convention for the Amelioration of the Condition of Wounded, Sick and Shipwrecked Members of Armed Forces at Sea (GWS SEA).

(3) The 1949 Geneva Convention Relative to the Treatment of Prisoners of War (GPW).

(1) No form of physical torture or moral coercion will be exercised against the CI. This provision does not constitute a prohibition against the use of minimum force necessary to effect compliance with measures authorized or directed by these regulations.

(2) In all circumstances, the CI will be treated with respect for their person, their honor, their family rights, their religious convictions and practices, and their manners and customs. At all times the CI will be humanely treated and protected against all acts of violence or threats and insults and public curiosity. In all official cases they will be entitled to a fair and regular trial as prescribed by this regulation.

(3) The CI will be especially protected against all acts of violence, insults, public curiosity, bodily injury, reprisals of any kind, sexual attack such as rape, forced prostitution, or any form of indecent assault.

(4) The CI will be treated with the same consideration and without adverse distinction based on race, religion, political opinion, sex, or age.

(5) The CI will be entitled to apply for assistance to the protecting powers, the International Committee of the Red Cross, approved religious organizations, relief societies, and any other organizations that can assist the CI. The commander will grant these organizations the necessary facilities to enable them to assist the CI within the limits of military and security considerations.

(6) The following acts are specifically prohibited:

(a) Any measures of such character as to cause the physical suffering or extermination of the CI. This prohibition applies not only to murder, torture, corporal punishment, mutilation, and medical or scientific experiments, but also to any other measure of brutality.

(b) Punishment of the CI for an offense they did not personally commit.

(c) Collective penalties and all measures of intimidation and terrorism against the CI.

(d) Reprisals against the CI and their property.

(e) The taking and holding of the CI as hostages.

(f) Deportations from occupied territory to the territory of the occupying power or to that of any other country, occupied or not, are prohibited.

b. Authorization to intern. Internment of protected civilian persons in a CI camp is authorized and directed provided that such persons satisfy the requirements for being accorded the status of CI. One of the following two conditions must apply:

(1) Internment has been determined by competent U.S. Military authority to be necessary for imperative reasons of security to the United States Armed Forces in the occupied territory.

(2) Internment has been directed by a properly constituted U.S. military court sitting in the occupied territory as the sentence for conviction of an offense in violation of penal provisions issued by the occupying U.S. Armed Forces.

(1) A protected civilian person in occupied territory will be accepted for evacuation to, and/or for internment in, a CI camp only on receipt of one of the following:

(a) An internment order for imperative security reasons authenticated by a responsible commissioned officer of the United States Military specifically delegated such authority by the theater commander.

(b) An order of an authorized commander approving and ordering into execution a sentence to internment pronounced by a properly constituted U.S. military court sitting in the occupied territory.

(2) The internment order will contain, as a minimum, the following information:

(a) The internee’s personal data to include full name, home address, and identification document number, if any.

(b) A brief statement of the reason for internment.

(c) Authentication to include the signature of the authenticating officer over his or her typed name, grade, service number, and organization.

d. Compassionate internment. Notwithstanding the provisions of b and c above, requests by the CI for the compassionate internment of their dependent children who are at liberty without parental care in the occupied territory will normally be granted when both parents or the only surviving parent is interned.

(1) As individually determined by the theater commander, protected civilian persons who are detained as alleged spies or saboteurs or as persons under definite suspicion of activities hostile to the security of the United States as an occupying power, will be regarded as having forfeited rights of communication with the outside world under the Geneva Convention (GC) for reasons of military security. Such forfeiture will be viewed as an exceptional and temporary measure. Due to the seriousness of the charges, such persons will not be processed as ordinary CI.

(2) Suspected spies and saboteurs will be afforded the same human rights treatment as the CI, and in case of trial, will be accorded the rights of fair and regular trial prescribed by the GC and by this regulation.

(3) When by the direction of the theater commander, suspected spies and saboteurs rights of communication with the outside world have been restored, their internment in a CI camp may be ordered in accordance with the provisions stated in paragraphs b and c above. When so interned, they will be accorded full CI status and rights and privileges as provided for by these regulations.

(4) At the earliest date consistent with the security of the United States, they will be released and granted full rights and privileges as protected persons under the GC.

f. Custodial security. The degree of security and control exercised over the CI will reflect the conditions under which their internment is authorized and directed and will recognize the escape hazards and difficulties of apprehension attendant on the internment of the CI in the occupied territory.

a. Location. The theater commander will be responsible for the location of the CI internment facilities within his or her command. The CI retained temporarily in an unhealthy area or where the climate is harmful to their health will be removed to a more suitable place of internment as soon as possible.

b. Quarters. Adequate shelters to ensure protection against air bombardments and other hazards of war will be provided and precautions against fire will be taken at each CI camp and branch camp.

(1) All necessary and possible measures will be taken to ensure that CI shall, from the outset of their internment, be accommodated in buildings or quarters which afford every possible safeguard as regards hygiene and health, and provide efficient protection against the rigors of the climate and the effects of war. in no case shall permanent places of internment be placed in unhealthy areas, or in districts the climate of which is injurious to CI.

(2) The premises shall be fully protected from dampness, adequately heated and lighted, in particular between dusk and lights out. The sleeping quarters shall be sufficiently spacious and well ventilated, and the internees shall have suitable bedding and sufficient blankets, account being taken of the climate, and the age, sex and state of health of the internees.

(3) Internees shall have for their use, day and night, sanitary conveniences which conform to the rules of hygiene and are constantly maintained in a state of cleanliness. They shall be provided with sufficient water and soap for their daily personal hygiene and for washing their personal laundry; installations and facilities necessary for this purpose shall be provided. Showers or baths shall also be available. The necessary time shall be set aside for washing and for cleaning.

(4) CI shall be administered and housed separately from EPW/RP. Except in the case of families, female CI shall be housed in separate quarters and shall be under the direct supervision of women.

(1) The CI internment facilities will be organized and operated, so far as possible, as other military commands.

(3) When possible, the CI will be interned in CI camps according to their nationality, language, and customs. All CI who are nationals of the same country will not be separated merely because they speak
different languages.

(a) When possible, members of the same family, particularly parents and children, will be lodged together and will have facilities for leading a normal family life.

(b) A parent with children, if single or interned without spouse, will be provided quarters separate from those for single persons.