The following Army Tactics, Techniques and Procedures publication was released in June 2011 by the U.S. Army.  A previous version of the document (FM 19-10) from January 1945 was titled “Military Police in Towns and Cities” and was “designed to furnish a guide for officers and enlisted men assigned the mission of patrolling civil communities”. The publication has been revised several times since then. 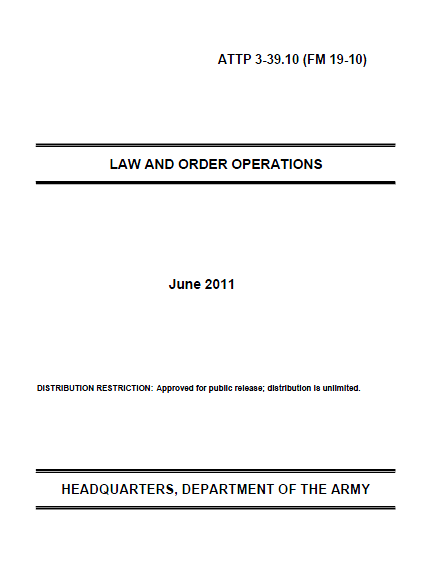 The establishment of full spectrum operations as the Army operational concept—and the shift to a doctrine where offense, defense, and stability or civil support are executed simultaneously and with equal emphasis—has been the catalyst in a major shift in thinking by military planners and commanders. Current doctrine and policy reinforce that the ultimate measure of success of any major operation is typically not realized through operations where offense and defense (traditional combat operations) are the dominant forms. Current doctrine establishes that stability operations and associated efforts to establish safe and secure environments culminating with a capable HN governing its own population, should be provided equal emphasis in military planning and execution. L&O operations are critical enablers to lines of effort supporting the creation of civil security and civil control necessary to achieve success.

Strategic and technological advances, geopolitical instability, and expanded threat spectrums have been the driving force for generating operational and organizational changes throughout the Army, to include the Military Police Corps Regiment. Army doctrine identifies four types of complex, interrelated, and emerging security challenges—irregular, traditional, catastrophic, and disruptive—to which U.S. forces will have to respond. The most immediate and pervasive threat the United States faces is the irregular security challenge. Irregular forces include insurgents, terrorists, and criminals who typically use asymmetric warfare and who benefit from conditions in areas throughout the world where HN governments are ineffective or nonexistent. The criminal threat can impact military operations and require commanders to commit forces and resources to minimize threat situations. To meet the challenges of current and future OEs, the modular military police structure is strategically mobile and provides operationally and tactically agile capabilities to respond to worldwide military police requirements.

L&O operations have historically been understood to consist of LE missions supporting U.S. military commanders and their efforts to police our military personnel, civilians, and family members working and residing on U.S. military posts, camps, and stations. (Posts, camps, and stations refer to any U.S. military installation, base, or other location within the United States and enduring installations, bases, or other locations outside the United States employed to support long-term military commitments and/or serve as power projection platforms.) U.S. Army doctrine has not historically focused on L&O operations outside of LE support to posts, camps, and stations. L&O support to the operational commander and the capabilities inherent within LE organizations have been largely disregarded within Army (and joint) doctrine. Recent conflicts and the nature of the threat within the OE have increased the relevance of L&O operations and LE capabilities in support of Army operations. The applications of L&O operations and the requirements for Army LE personnel to conduct these operations have grown tremendously as nation building and protracted stability operations have demonstrated the need for civil security and civil control as critical lines of effort within the larger effort to transfer authority to a secure and stable HN government.

Lessons learned from recent conflicts, coupled with task analysis conducted by the U.S. Army Military Police School (USAMPS), Fort Leonard Wood, Missouri, have resulted in an expanded doctrinal framework and understanding of L&O operations. The expanded framework does not establish new tasks within the L&O function, but identifies and documents missions and tasks in the revised doctrine that have historically been conducted by military police thought they have not been adequately documented within Army doctrine. Recent updates to military police keystone doctrine establish L&O as the primary military police function, shaping the actions and perspectives of military police in the conduct of all military police functions. These updates describe L&O operations within the context of two activities—policing and LE. Policing activities are general actions aimed at establishing order and stability within an area of operations (AO); LE activities are tied to the rule of law and require specific training and authority for the element or personnel performing the actions. While military police are uniquely qualified to conduct policing, these activities do not require personnel specifically trained for LE activities. LE activities require specific training and may only be conducted by LE personnel (military police, USACIDC special agents [SAs], or other trained and certified LE personnel).

Beyond support to posts, camps, and stations, the requirement for military police capabilities in training and supporting HN police is the most visible and resource-intensive L&O activity. Additionally, maneuver commanders recognize several key LE enablers that greatly enhance and contribute to mission success, including—

• Expertise in evidence collection that is critical to successful site exploitation.
• Biometric applications and modular forensic laboratories.
• Identification of critical civil information regarding the criminal environment, the HN police capability and capacity, and the local population which is obtained through integrated police intelligence operations.

Whether conducting LE activities in support of posts, camps, and stations; supporting protection requirements; maintaining and restoring order in an effort to stabilize an AO; providing training and support to HN police; controlling populations; or supporting humanitarian relief operations, military police L&O capabilities are invaluable to the maneuver commander.

1-28. Army forces may execute a simultaneous and continuous combination of offensive, defensive, and stability or civil support operations (see FM 3-0). Military police L&O capabilities are relevant within all four elements of full spectrum operations by maintaining good order, enabling freedom of action, providing protection of the force, and shaping conditions for the successful transition from combat operations to civilian governance under the rule of law. Military police L&O support to full spectrum operations includes a wide range of missions and tasks that support uninterrupted movement, allow maneuver forces to preserve combat power so that it may be best applied at decisive points and times, and foster rapid transitions in operations. Throughout all operations, USACIDC elements conduct required criminal investigations regarding U.S. personnel, war crimes, detainee abuse, U.S. military civilian employees, contractor personnel, and other persons accompanying the force. USACIDC SAs may also be assigned to battalion, brigade, and higher-level staffs within the PM section to support L&O planning and police intelligence activities and to provide advice to the command on evidence collection and targeting. USACIDC SAs assigned or attached outside of the USACIDC command structure are not authorized to conduct felony LE investigative operations (see Army Regulation [AR] 195-2). Specific L&O-related tasks that support full spectrum operations include—

1-29. Military police conduct L&O in support of full spectrum operations within three contexts or conditions, including support of—

• A commander’s internal efforts to maintain good order and discipline, such as providing support for posts, camps, and stations within the United States and its territories or on base camps and other operational sites in mature theaters of operation outside the United States. In this context, the application of the L&O function is focused internally at policing our own Soldiers and civilians and deterring, mitigating, and preventing criminal and terrorist threats. L&O within this context is critical to preserving combat power and enabling commanders to focus on their primary missions. Deliberate L&O operations are significantly reduced during operations in immature theaters and during operations off a base of operations. Minor infractions are typically handled by the chain of command without direct military police support. USACIDC conducts criminal investigations of major crimes (including those involving death, serious bodily injury, and war crimes) regardless of the environment or relative maturity of the theater of operations.
• A commander’s efforts to establish and maintain civil security and civil control within an HN to enable self-governance under the rule of law. This application is focused externally on policing and LE activities targeting the local population in an OE where HN policing and security capability is nonexistent or inadequate. The goal of any L&O operation within an HN is the eventual transition of all policing and LE functions to HN control.
• Local LE agencies within the United States or its territories in times of crisis during civil support operations. This may include—
• U.S. Army National Guard military police elements that regularly support their respective state governors in this function while operating as state assets under Title 32, U.S. Code (32 USC).
• U.S. Army Reserve and Regular Army military police elements, including federalized National Guard Soldiers, generally prohibited from direct participation in LE. (See FM 3-28 for additional information on civil support operations and a more complete discussion of the legal authorities and restrictions pertaining to military police L&O support to civilian LE authorities in the United States.)

1-41. Civil support is defined as DOD support to U.S. civil authorities for domestic emergencies and for designated law enforcement and other activities (FM 1-02). Civil support operations are domestic operations that address the consequences of man-made or natural accidents and incidents beyond the capabilities of civilian authorities (see FM 1). Civil support operations are conducted within the United States and its territories and are divided into the three broad categories of domestic emergencies, support of designated LE agencies, and other support activities (see FM 3-28).
Note. State and local governments have the primary responsibility for protecting life and property and maintaining L&O in the civilian community. Supplementary responsibility is vested by statute in specific agencies of the U.S. government other than the DOD.

• Address the consequences of man-made or natural accidents or incidents.
• Normally occur after a Presidential declaration of a major disaster or an emergency.
• Are implemented only when response or recovery requirements are beyond the capabilities of civilian authorities, as determined by the Federal Emergency Management Agency or other lead federal agency.
• May be used to help civil authorities protect U.S. territory, population, and infrastructure against attacks. Other governmental agencies have primary responsibility for these areas. Army forces have specialized capabilities and may provide important resources and assistance in support of another lead federal agency.
• Are normally organized under the unified command and incident command system within the construct of the National Incident Management System.