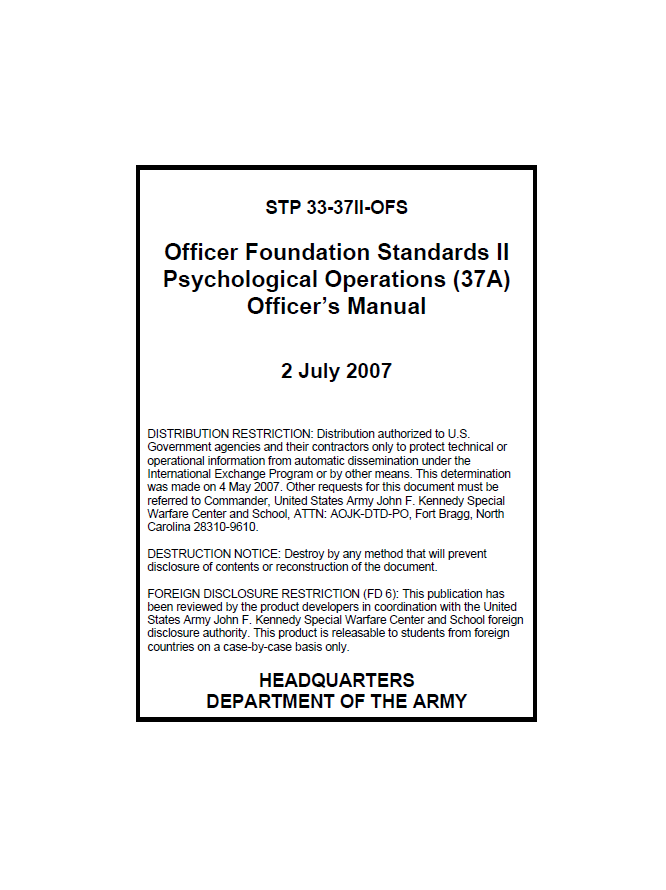 Behavioral change is at the root of the PSYOP mission. Although concerned with the mental process of foreign TAs, it is the observable modification of foreign TA behavior that determines the mission success of PSYOP. It is this link between influence and behavior that distinguished PSYOP from other capabilities and activities of information operations (IO) and related components such as public affairs.

Army PSYOP is the preeminent IO core capability and the U.S. military’s primary vehicle for communicating U.S. themes and messages to foreign TAs and influencing their behavior. As a core capability of IO, PSYOP supports U.S. public diplomacy, public affairs, interagency communications, as well as unit commanders. Both science and art, PSYOP are inherently effects based and frequently require joint and interagency coordination. PSYOP help shape the physical, informational, and psychological dimensions of the battlefield and provide a nonlethal capability across the range of military operations. As information delivered for effect during peacetime and conflict, PSYOP inform and influence. When properly employed PSYOP saves lives of friendly and adversary forces, as well as noncombatants.

The Required Characteristics of a PSYOP Officer. Successful PSYOP officers are students of influence and human interaction. They employ sophisticated methods to influence often contrary or hostile individuals/groups of people to adopt behaviors favorable to U.S. interests. PSYOP officers are cross-cultural communications experts that are regionally trained and possess a foreign language capability sustained by self-study after initial training. In addition, PSYOP officers possess a rare combination of qualities; exceptional interpersonal skills, personal lethality (warrior ethos), adaptive thinking, leadership, and technical proficiency. PSYOP officers are extremely flexible and adaptable, are able to survive and succeed in remote and diverse environments, austere locations, and under unstructured or hostile conditions. They are self-reliant and able to make independent decisions based upon the supported commander’s intent with little or no immediate supervision. PSYOP officers are leaders proficient in operating as integrated members of combined arms teams, with joint, interagency, intergovernmental, and multinational units as well asin support of special operations forces (SOF). PSYOP leaders are self-aware, comfortable with ambiguity, and routinely anticipate second and third order effects of planned activities. PSYOP officers must have the ability to recommend/enact solutions to complex political-military problems while employing a mix of conventional and/or unconventional solutions for which no doctrinal methods or tactics/techniques/procedures may exist.

While many broad-based undergraduate programs can provide PSYOP officers with the educational foundations and tools to be successful in influencing behavior, Figure P-1, page iv, is a list of academic disciplines most useful to the preparation of a PSYOP officer at the under-graduate or graduate level. 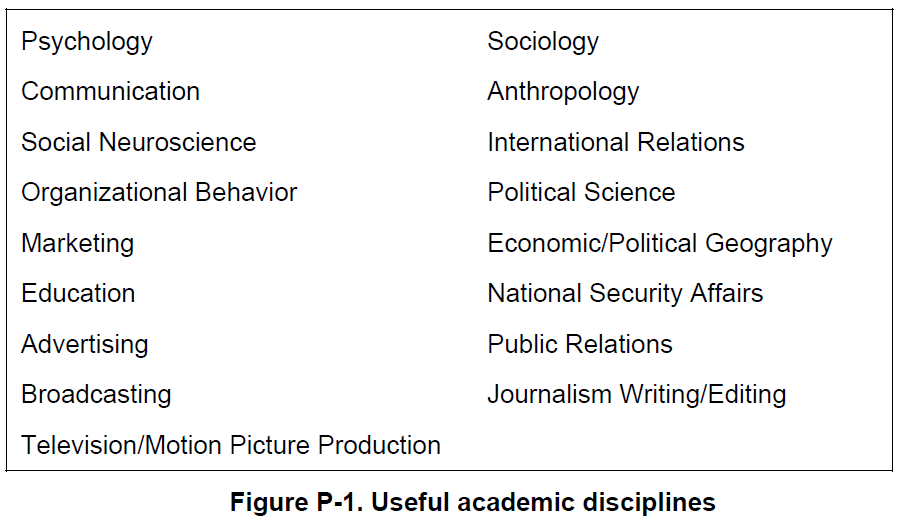 The Role of the PSYOP Officer.PSYOP covers a wide variety of functions in the Army. A PSYOP officer plans and directs operations to convey selected information and indicators to foreign audiences, with the goal of changing their behavior to better align with U.S. policies. PSYOP officers assess TAs; develop PSYOP plans, programs, and products; coordinate for the dissemination of PSYOP products; and synchronize PSYOP activities into strategic, operational, and tactical peacetime and combat operations. PSYOP officers maintain critical knowledge associated with a specific region of the world to include foreign language expertise, political-military awareness, and cross-cultural communications.

The Skills and Knowledge of the PSYOP Officer.

PSYOP officers have an in-depth knowledge of social and behavioral psychology, and the science of persuasion and influence. They possess the ability to interact with host nation (HN)/local national military and civilian officials, the general population, detainees, enemy prisoners of war (EPWs), displaced civilians (DCs), and internees. PSYOP officers possess a working knowledge of the political and cultural trends and attitudes in a variety of foreign countries. PSYOP officers have a practical understanding of individual and group psychological dynamics that expose information voids in foreign populations. He also has expertise in executing PSYOP activities meant to create favorable results for the supported unit or organization. PSYOP officers are familiar with unique equipment that ensures messages are developed, produced, and disseminated at the right time and place to effectively reach and change the behavior of the TA.

PSYOP officers are mature professionals. They work at the highest levels of command organizations on sensitive issues, often briefing and advising strategic and operational commanders, and senior U.S. or foreign government officials.

This publication supports the Army’s officer foundation standards (OFS) system of training. It providesPSYOP company and field grade officers the training and knowledge necessary to perform their duties. Specifically, it includes—

• Critical branch tasks with standardized task summaries that the PSYOP company and field grade officer must perform proficiently.
• Tasks that are first trained in the PSYOP Officers Qualification Course (POQC).
• A bibliography of selected branch reading materials and other related information.

All tasks in this manual are PSYOP-specific tasks. Officers will use this manual as a training instrument and a self-evaluation tool. Commanders will use this manual to formulate professional development programs for company grade officers on the basis of the unit critical mission-essential task list (METL). Officers should attain a high level of proficiency in performing the tasks described in this publication. Mastery of these tasks will lead to successful mission accomplishment.